Happy Februrary ladies! I'm watching the Super Bowl but it's Februrary so I had to create the next small talk thread!

Ha! You''re so on top of this. I didn''t even register that it was February yet.

Me either. Heres some small talk.. I''m afraid my chest isnt going to fit into my #1 dress - which I''ve finally narrowed down for all the right reasons and I''m truly in love with. I''m going to try and get an app at a local bridal store that carries the line - its Amy Michaelson''s Grace.. I''m going to be really devastated if thats the reason I cant get the dress.

That''s one gorgeous dress, SS! Is it the curse of too much boobie or too little? For me it would deeefinitely be too little 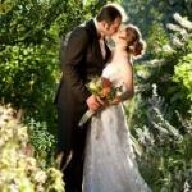 That''s a gorgeous dress! I don''t know if my chest would fit in it either, though, for the too much reason. I''m hoping it fits you perfectly, though!!!

My crazy work week is over and the crazy work month begins, but I''m hoping I''ll be able to fit in plenty of PS time. In LIW news, Kris made a comment today about us not having to worry about a wedding for 3 years!

I mentioned it later and he said that he was just using a random number, though. I told him in no uncertain terms that I wanted to be married well before then and he agreed, though, so it turned out ok.

Any Battlestar Gallactica fans on here? We watched Friday''s episode and it was great! I can''t wait to see how they end the show.

Anyhow, I''m off for the night. Have a great evening ladies!
-
Hot chocolate butterflies dance through my heart and tell me you're the one.
Come take a sip of this so I can look into your beautiful eyes and say,
"Ouch! I spilled some on my lap, burning my leg, but I don't mind. I'm with you."

sailorssweet, I missed your dream dress somehow... do you have a linky to what it looks like? I''m sorry if it doesn''t fit -- I hope it could be altered to fit!
Now a Mrs.! 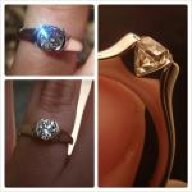 I think this is the dress she''s talking about...hopefully she''ll clarify.

ha! I just realized I misspelled February in the thread title......

February should have an extra R in it for R-ing

That is the dress.. heres a picture. I dont even know if lace could be added to the bust or not. The back is what makes it unique. I''m going to call tomorrow and request an appointment and just cross my fingers. I dont want to start all over if it doesnt work out though

I feel like it took me months to decide on this one. Blah! 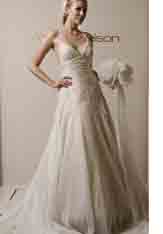 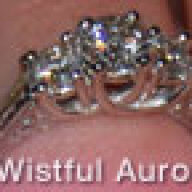 The dress is beautiful!

SS, I LOVE that dress! I am a huge fan of the detailing, especially the back. Dresses like that make me wish I weren''t so busty.

Thanks girls! It really goes either way - you have to have the perfect size bust - not too big not too small. Why''s that dress being so picky huh? I''ll post and let you know what happens if I can figure out when I have time to try it on.
for the rest of my life I will search for moments full of you ♥

I wonder if the admins could change it!?
Click to expand...

Ha! I hadn''t even noticed.

I wonder if the admins could change it!?
Click to expand...

Ha! I hadn''t even noticed.

Thanks, audball! Wow -- that is a beautiful dress! Love the front AND the back! I hope it works out, sailorssweet.
Now a Mrs.!

Ok I don''t want to make a whole post about this, but I just wanted to say that BF called me "future fiance" yesterday...

I am so tired today! Good football game too! Anyone watch The Office... that episode was so funny!

SS I''ve tried that dress on! I am a 36D and I didn''t feel like it was toooo revealing. I am a girl who appreciates a good deal of support though so I think that is one of the reasons I decided to pass on the dress. Though. I bet if you had cups sewn into it you would feel a lot less exposed.

When I tried that gown on Amy Michelson was actually AT the salon! It was at Kleinfeld''s just before Christmas. She was standing there with me while I selected some of her gowns to try on. A weird but sorta cool experience.
***-**-*-**-***
C-tek

I am so tired today! Good football game too! Anyone watch The Office... that episode was so funny!
Click to expand...


I am so tired today! Good football game too! Anyone watch The Office... that episode was so funny!
Click to expand...

That is exciting that he called you that! Yay. Also, yeah, the Office fire episode was hilarious.
Now a Mrs.!

So which were people''s favorite Superbowl ads? Mine were Careerbuilder''s "Tips" ad and E*trade''s talking golf baby.
Now a Mrs.!

Wow, that dress is beautiful...I have not seen anything quite like that. I hope it fits you ok. 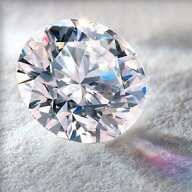 I got my new ipod touch today so I have something to distract me for a while until I hopefully get my ring.

Of course, the first two songs I added to my YouTube favorites on it are Beyonce''s "Single Ladies" and Taylor Swift''s "Love Story."

Date: 2/2/2009 5:16:08 PM
Author: Dreamgirl
Hmmm....I was very disappointed in the commercials this year. Seems like they had A LOT of network commercials. I'm assuming thats because of the economy and not everyone wants to pay millions for an ad. The only one that I thought was sort of funny was Mr. Potato Head driving down the road with Mrs. yelling at him about everything. Then her mouth pops out so she puts in her angry eyes. FF was pointing at me....as in (haha that's you!) I couldn't help but laugh as well.......see it here!
Click to expand...

I didn't get to see that ad because we were late to the Super Bowl Party... but once we showed up everyone was like, "We saw the perfect commercial that is SO YOU SwedishBean!" haha.. and that was it!!

Thanks for the link too, now I can see it.

I really liked the commercial that did the, "If you hate your job and blah, and blah" I can't remember now but it was really long and pretty good.

Here is the link to the AD

I am so tired today! Good football game too! Anyone watch The Office... that episode was so funny!
Click to expand...

Yep, I watched The Office. That is MY show!!! The fire stint was hilarious.
Click to expand...

I was laughing so hard. When dwight did that thing with the dummy... lol

Was it just me or did anyone else feel like the episode was a bit weird? Like it was written by different people? I LOVED IT, don''t get me wrong, but the tone was different than the last several episodes. Aw, also the thing that Pam and Jim talked about when she was all teary was so cute!!! I kept saying "Awww Aw.. "

SS, that dress is gorgeous and I hear you about the chest situation! When I had to try on BM dresses I was a size 6 in the chest, size 4 in the waist and a negative number in the hips!

I'm in Canada and when we were watching the superbowl we were all wondering how different the commercials were in the US compared to Canada. I'm sure they were much better than ours! They played a Coca-Cola commerical at each break...and that's all I can remember. I hate commercials!

I have an exciting story from the weekend and I didn't feel like it needed its own thread so here it is:

For the past few months my BF has been telling me that a proposal will happen anytime between now and my birthday (May 21st)...which sounded fabulous to me! Last weekend I heard about a friend getting engaged recently and I called my BF to relieve some of the anxiety I was feeling and he said that he could push the timeline up a month...so between now and April 21st. Then I asked "Well, how about pushing it up 3 months (to Feb 21st)" and he said that it was possible but there were some technicalities that might prevent that. I just said "REALLY?!?!? I LOVE YOUUUUU!!!" and hung up the phone.

Also, my friend who just got engaged caught the bouquet at a wedding we attended in October so it really does bring good luck (and the bride had caught the bouquet at her sister's wedding and was the next to get married too)! The first thing I thought upon hearing of their engagement was that I should have tried harder to catch the bouquet. Ah well....

Well, nice to read of the recent engagements...was getting worried there for a bit.

I'm standing at the water cooler all by myself!

Where is everyone? You're not actually working are you?!