The ASET (Angular Spectrum Evaluation Tool) is a cut quality assessment scope for round diamonds. Its translucent cone and magnifying lens create a structured light environment which reveal areas of brightness, leakage, and contrast when placed over a diamond.

Note: Visit this page to see how Ideal Scope works, as a prerequisite to learning about ASET.

ASET is like the Ideal Scope but gives more detailed information. It is best for analyzing fancy shaped diamonds, which are more complex than round diamonds.

The ASET is based on a principle discovered by Kazumi Okuda in the 1970s, further developed by Garry Holloway and Al Gilbertson. The American Gem Society used it as the basis for their patented light performance based cut grading system, introduced in 2005.
Click Here to get a handheld ASET scope

The real test for diamond beauty happens under normal and low lighting conditions. Depending on how it was cut, light entering a diamond from above will either reflect and come up to the viewer’s eyes as brightness or escape through the bottom as leakage or windowing, resulting in dark areas with no light return. 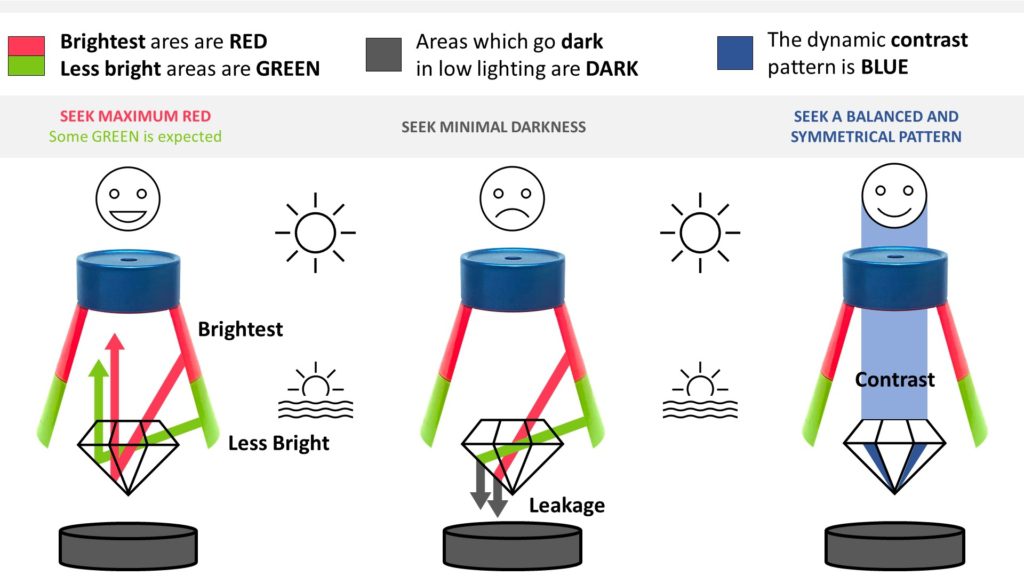 Seen in ASET, the most brilliant diamonds have abundant red, accented by tiny green areas (brightness) with minimal darkness (leakage) and a symmetrical pattern of blue (contrast) which resembles a pointed star.

The first four (left to right) would all receive the “Excellent” cut grade.

Did You Know?  ASET is rarely seen in stores because it will reveal deficits in most diamonds. Guarantee your diamond has superior performance with standout vetted vendors willing to provide Ideal Scope and ASET images, including Whiteflash.

While most ASET photo setups use a dark receptacle beneath the diamond (so leakage is dark) it’s possible to use a lighted panel beneath the diamond, in which case leakage becomes white. Similarly, when using the handheld ASET like a jewelers’ loupe – inspecting a loose diamond with nothing beneath it – any leakage will correlate to whatever is behind or beneath the stone. Suggested Handheld Use When using ASET like a loupe you can tape a piece of white copy paper to a bright window or table lamp, to create an even, illuminated background for analysis. Doing this also increases the amount of illumination within the cone, such that blue, red and green become better defined. 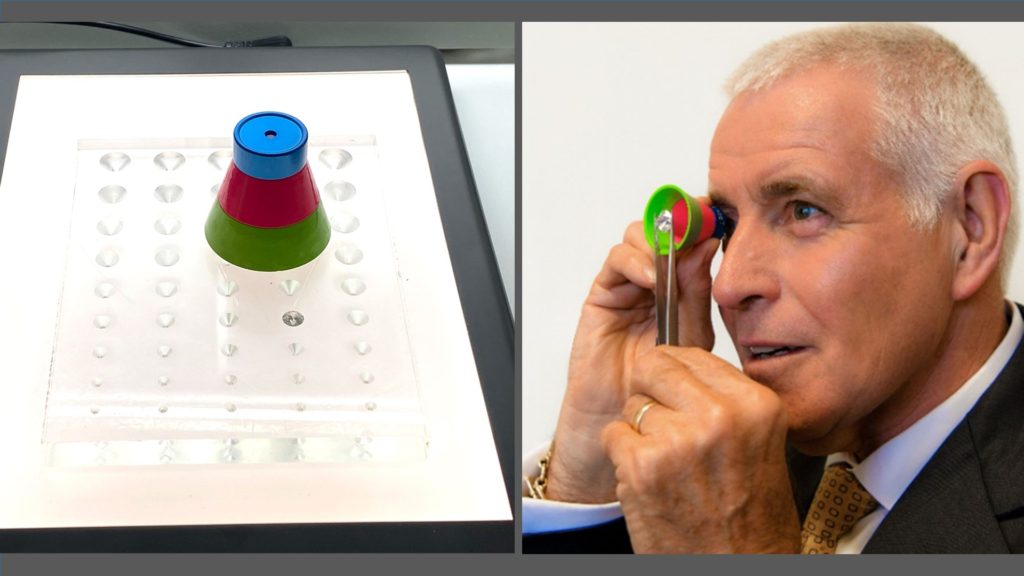 Tilt Fancy Shapes With fancy shapes: A static face-up ASET image may look great but when you tilt the stone large areas of leakage (white) or unbalanced contrast (too much blue) may appear. It is best to rock a diamond while viewing it with an ASET scope as shown in this demo. 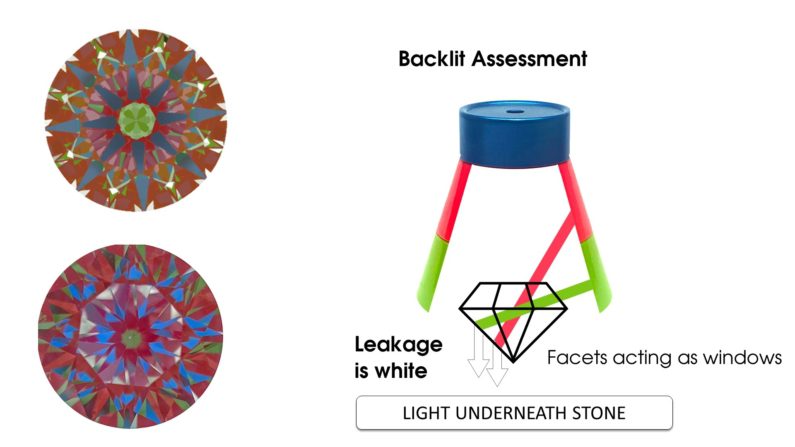 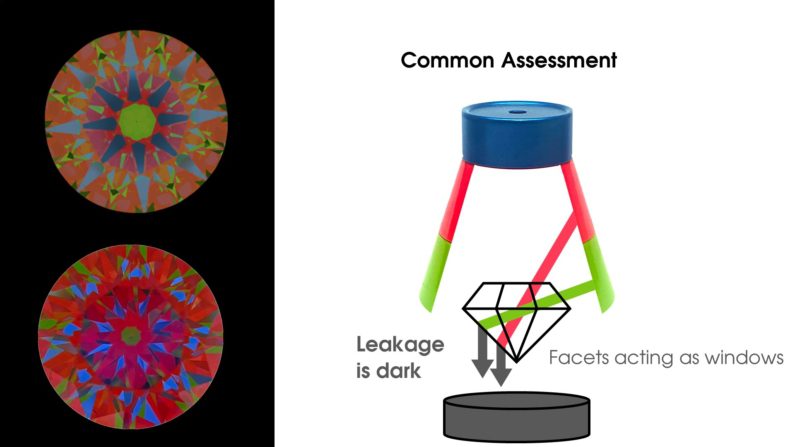 Depending on the main facet angles, light entering a diamond will either reflect and shoot up to the viewer’s eyes (as brightness) or escape through the bottom (as leakage or windowing). In general terms, brightness is desirable, leakage is to be avoided – with exceptions. 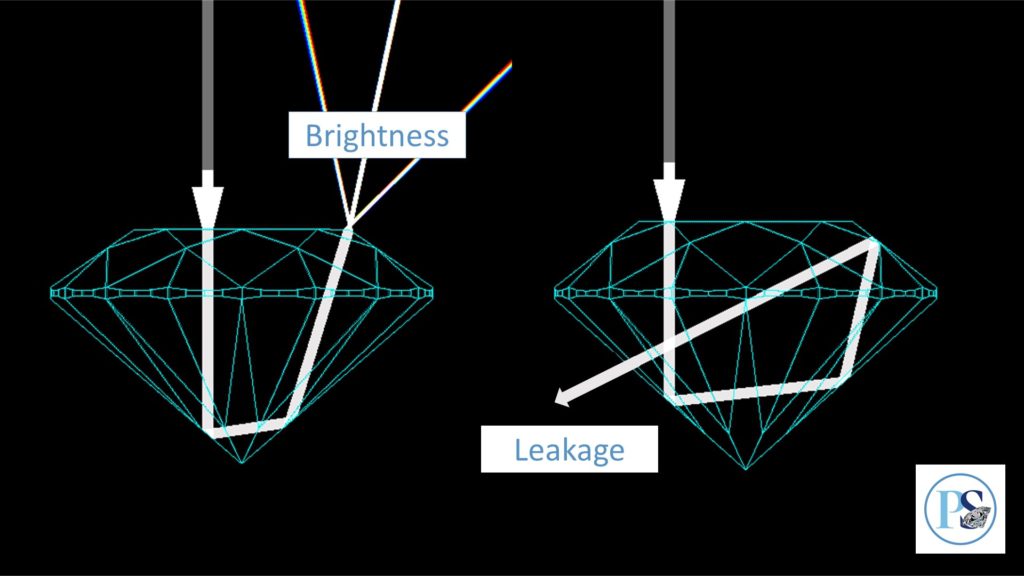 Some light from above will always be blocked by the viewer, creating a dark pattern. You can see the contrast effect in diamond photos because the black camera lens blocks light the same way a viewer does. The on and off contrast effect is a dramatic component of scintillation when diamonds move, as darkened facets change rapidly to white or colored flashes, then darken again. 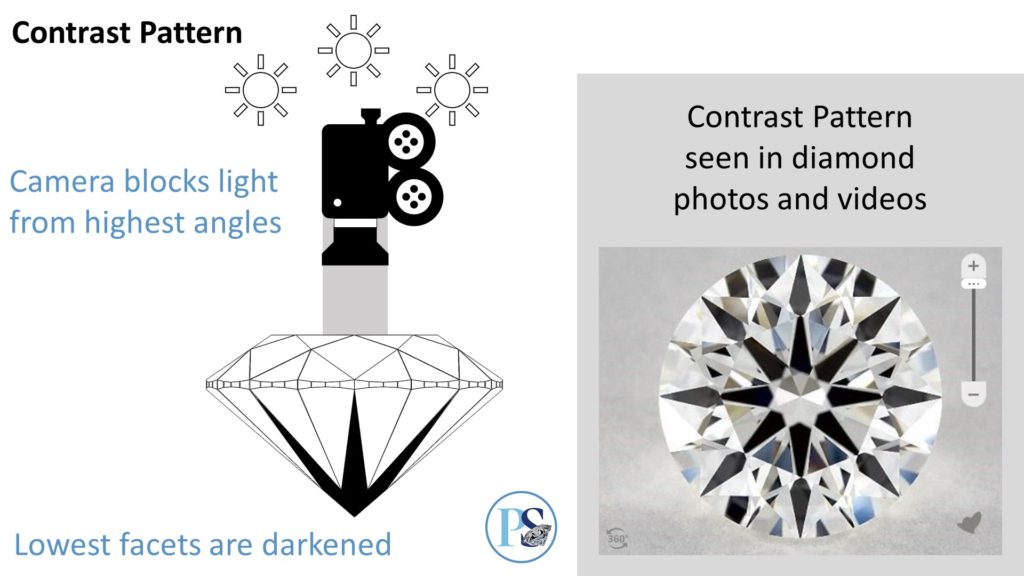 Under optimal lighting: When combined with great brightness, a diamond’s contrast pattern drives the vivid “on-off” suite of white and colored flashes we see as sparkle in brilliant cuts. The amount and distribution is key. Generally speaking, a balanced and symmetrical contrast pattern is desirable.