Diamond ratings systems exist for each of the diamond 4Cs. While carat weight is standardized and color and clarity are rated similarly between graders, cut ratings are notoriously variable.

PriceScope Pointer: The one thing all diamonds ratings systems have in common is a softer approach to judging diamond cut than judging color and clarity. This is something all shoppers should know.

Each of the 4Cs has a diamond ratings system used in loose diamond grading.

The 3Cs above are treated uniformly by top-tier laboratories, reputable appraisers and other diamond professionals. Essentially, the diamond ratings system for carat, color and clarity does not change in terminology from place to place. For the subjective areas of diamond color and clarity it’s possible for the grading standards to vary, even within a single organization, but the diamond ratings systems are uniform

Diamond ratings for cut are inconsistent.

Diamond cut is treated differently. Color and clarity have been strictly graded since the 1950s, but the world’s largest laboratory, the Gemological Institute of America (GIA), didn’t grade cut until 2006. Other diamonds ratings systems for cut had been launched by other laboratories, but they were inconsistent in both terminology and standards.

Arguably, the best diamond ratings system for cut quality is offered by the American Gem Society (AGS). In 1996 they began grading round brilliant diamonds with a top cut grade of “Ideal.” They improved on this in 2005 with the industry’s first scientifically reviewed diamonds ratings system for optical performance. AGS is one of two top-tier laboratories offering diamond ratings in the areas of cut for certain fancy shapes. The other laboratory is the Gem Certification and Assurance Lab (GCAL) which, arguably, offers the best technical imaging and videography available.

Presuming you stay with certification from a top-tier laboratory, diamond ratings for color and clarity will typically remain within one grade for any specific diamond. Considering how granular and subtle those diamond ratings systems are, a one grade difference is technically negligible. Of course, those values are used to establish a diamond’s value so it’s in the best interest of shoppers to use the strictest set of grades. 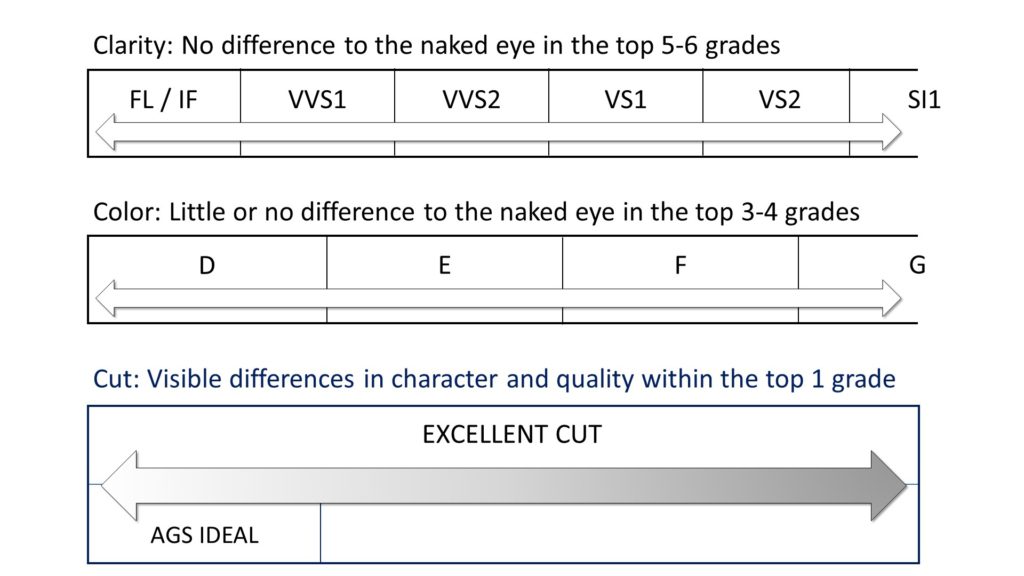 Color Ratings: Diamonds with the top 3-4 color ratings appear similar to the naked eye. Even an experienced gemologist may struggle to separate D color from F color unless the diamonds are loose and compared against a neutral background.

Cut Ratings: Anyone with decent eyesight can see clear character and quality differences between diamonds which have the same cut rating: Whether Excellent or even AGS Ideal.

Even the top-tier laboratories have launched, revised, introduced and re-introduced diamond ratings systems for cut quality over a dozen times, with no uniform approach. Some use arbitrary systems, others use repeatable science. The one thing they have in common is a far softer approach to judging cut-quality than to grading the natural Cs of color and clarity.

PriceScope lists hundreds of thousands of diamonds offered by reputable, vetted vendors, including the most recognized e-commerce sellers in the world. We periodically update the diamond ratings chart below, which shows the distribution of GIA graded diamonds (the most abundant) applied to different ratings systems. 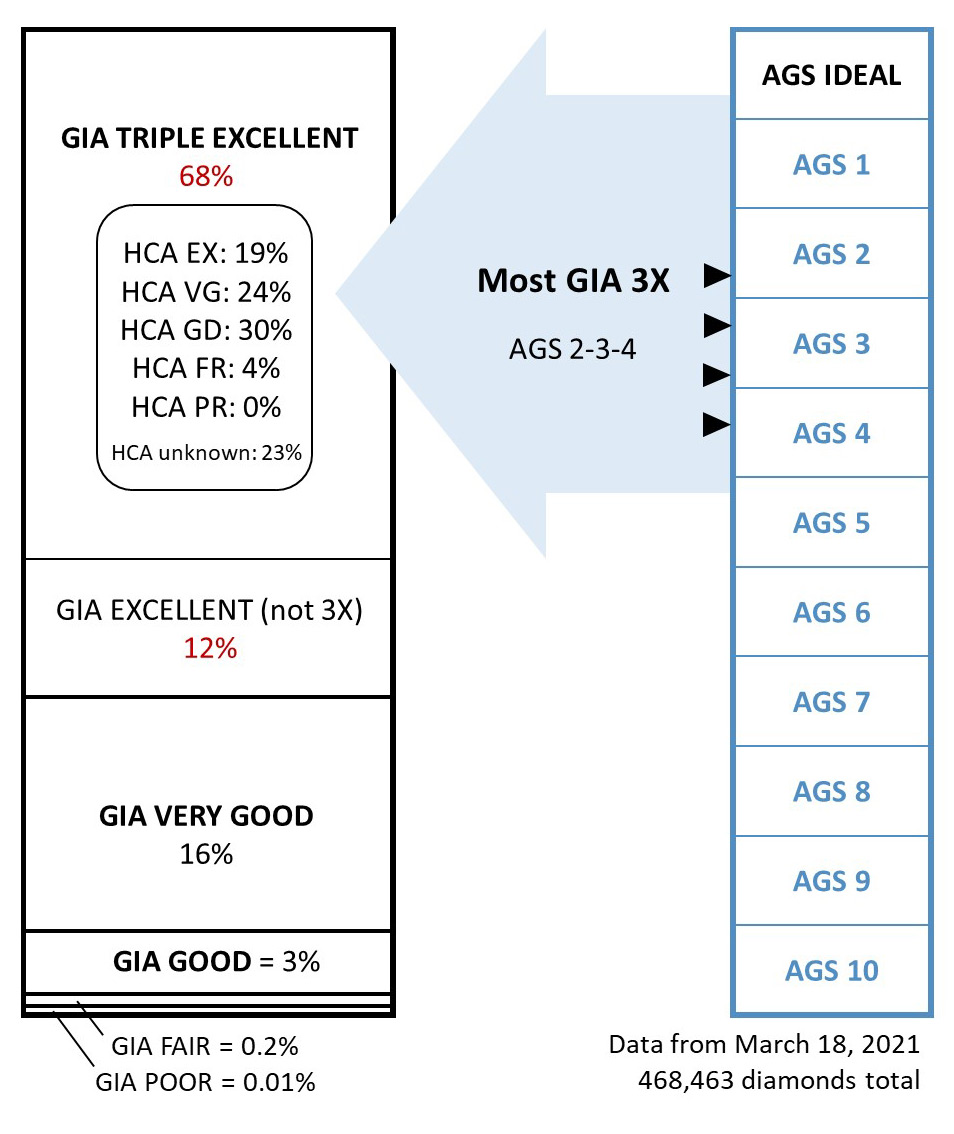 Reliably, more than half the diamonds GIA grades receive their highest cut grade of Excellent, yet only around 20% pass the patented Holloway Cut Advisor analysis.

Statistically, a GIA Excellent diamond may be rated anywhere between AGS Ideal (AGS 0) and AGS 5 in performance, if graded using the AGS Platinum Report. To predict where a given GIA Excellent falls requires details of spread, proportions, and angles. But facet-group data is averaged and further rounded up or down, so definitive predictions aren’t possible. Moreover, no measure or analysis of 3D optical precision is provided. In general terms the proportions most frequently used producers submitting diamonds to GIA correlate to AGS 2-4, and sometimes AGS 5 in performance, because those cutting angles produces a heavier diamond.

From a percentage standpoint, if GIA were to treat color grading like cut grading, all diamonds DEFGHIJKLMNO would receive Excellent in color. PQRSTUV would get Very Good and only WXYZ would be Good, Fair or Poor.

For over 100 years producers were not held accountable to a cut quality standard. In fact, if you were born before 2006 you were living during a time when GIA was grading only 3Cs and the impact of cut on appearance was ignored. This lack of diamond ratings kept producers happy but was a glaring disservice to consumers.

When the internet opened to the public in 1991 there came an increasing outcry for cut assessment, so the American Gem Society developed a diamond ratings system for cut quality and opened a lab in 1996. The AGSL was considered nerdy and niche (and still is). Then and now, the major diamonds producers send only a fraction of diamonds to AGSL. That fraction is proportionate to the niche audience of performance-focused jewelers who care, and consumers research the topic.

Bottom line: prior to 2006, there was no commercial reason for major producers to give attention to cut quality improvement.

The parameters GIA introduced in 2006 for cut grading round brilliants changed diamond production. Their diamond ratings system penalized shallow stones, so producers shifted their output to much steeper and deeper proportions sets. Today producers avoid shallow production when possible and even beautiful 60-60 style diamonds (with shallow crowns) have nearly disappeared. Meanwhile, diamonds cut with pavilion angles over 41 degrees combined with crown angles over 35 degrees have exploded onto the scene, since the GIA diamond ratings system for cut allows them in the top “excellent” grade.

Bottom line: Major producers plan many diamonds to reach the minimal threshold of the “excellent” cut grade with angles which maximize weight at the expense of brightness. We are in the Steep Deep Era of round brilliants.

Producers know they need only hit the averages – which get further rounded – to make the target grade. There is no motivation to keep all angles close and improve optical precision (which would intensify brightness and dispersion). Technology and diamond cutting tools have improved, so there has been an increase in overall consistency, yet the steeper-deeper targets have resulted in a reduction of overall brightness.

Bottom line: Most people have only seen diamonds produced with weight as a priority. Unless you have made the effort to identify and witness performance focused diamonds you have likely never seen a diamond produced for maximum brightness, fire, and scintillation. They are that rare.

For many people there is nothing to see here. A diamond is often a symbol, more than anything. For most people, the current diamond rating systems and assessments seem to work fine.

It’s clear that diamonds can be awesome to people, whether they have topmost cut quality or not. But, as with wine, food, music, cars, bicycles, audio-components or (insert your proclivity), there is an undeniable audience interested in higher levels of diamond craftsmanship and meaningful diamond ratings. For the modern round brilliant that usually involves brightness, fire, and sparkle. How do we optimize those?

For those who do:

Brightness is measured in all laboratory systems. Some are just stricter than others. Top GIA and AGS graded diamonds will have strong brightness, with minimal dead areas.

Fire and sparkle are not decisively measured by any laboratory. Maximizing fire involves greater crown height (old school) or creating larger, unbroken internal reflections (new school) which result in wider spectral fans of dispersion which can be perceived by the eyes as bigger, bolder bursts of fire. Intensifying scintillation (aka sparkle) relies on cumulative brightness and dispersion output, along with a crisp, balanced contrast pattern which is dynamic through a range of tilt.

Finding a PriceScope Ideal or an even rarer Super Ideal diamond involves a search.

These diamonds require a conscious effort to produce beauty at the expense of weight. They require superior tools, each polisher using his own equipment and lubrication – rather than the majority of the world’s diamonds, produced with 2-4 polishers using the same polishing wheel.

More importantly, all work falls under an umbrella of understanding that extra time and more carat weight will be spent fashioning the diamond to PriceScope Ideal proportions, and possibly fine-tuning the world’s hardest natural substance even further to an extremely rare level of physical and optical precision to reach Super Ideal designation.

This is not normal. It requires passion and commitment. And, in case it isn’t clear, it typically requires more effort for less reward. You can read more about subsets of round brilliant diamonds on our cut page, and super ideal optical precision on our hearts and arrows page. 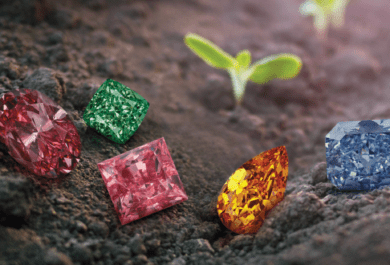 A Rainbow of Fancy Colored Diamonds

Fancy-colored diamonds can come in practically any color, and we love them all. We celebrate the rainbow in our favorite fashion, a rainbow of diamonds! Gorgeous arrays of hues add…