Indented Natural and Girdle with = does it affect it?

A non-indenting natural which is contained within the girdle and on the same plane as the girdle has no affect on the width. It's considered part of the girdle "runway", with just a different surface.

A non-indenting natural which is inclined AT AN ANGLE to the girdle reduces the width of the girdle. Whatever girdle space is left at the demarcation of the inclined natural is the girdle width for that "stretch of runway".
Rich, non-Independent GG Appraiser
Sarasota Gemological Laboratory
P

Why is it that a natural will affect width of the girdle but an indented natural would not?
P


Can a natural at the girdle cause the girdle to be too thick as well as too thin?
P

I''m guessing an indented natural is easier to SEE as an inclusioin and therefore is more of a clarity grade setter. If it is not indented then it is more like a tiny minor finish blemish than an "inclusion".

I''ll have to draw a picture of it for you, Pyramid, but I don''t have DiamCalc on this computer. I''ll try to remember and do it on my laptop today.
Rich, non-Independent GG Appraiser
Sarasota Gemological Laboratory
P

Thanks Richard Sherwood - a drawing would be helpful

Reminding Richard Sherwood when he is able to draw this.

A natural is original surface material of the rough diamond that was never polished away in cutting. If it does not indent, it means the cutter just left a part of the original skin of the stone on the surface plane of the surrounding facets. Generally, a tiny extra facet could be placed there if one wished to do it. It would add or subtract nothing with that diamond. The weight would probalby not change more than a fraction of 1/100 of a carat.

An idented natural would be where the skin of the original diamond had a dip in it that is NOT on the plane of the surrounding facets. Removing such a blemish would require a bit more grinding and polishing. There would be somewhat more weight loss. The shape or surrounding facets would have to be altered. This can be minor or more major. We are not talking specifics here. An indented natural is generally a little valley and might be confused by someone as a chipped stone.

You can find naturals and indented naturals on diamond pavilions and crowns, never on the table. Usually they are at or on, or in the girlde, but not every time. Size, location and visibility determine how they are handled and graded. Most well cut diamonds have no naturals or only tiny ones. Most well cut diamonds would only have an indented natural in the width of the girdle, not denting the stone''s outline.

I don''t have any general info to add, but here''s my personal experience:

Both my antique diamonds--an OEC from one grandmother''s engagement ring and a transitional cut from the other--have indented naturals on the girdle. In both cases I thought they were chips. One took the appraiser many minutes of twisting it and turning it and peering at it and saying "Hm!" before he decided it was a natural and not a chip. That one made the stone a VS1. The other was much more obviously a natural (to him--I was convinced I had chipped it), and the stone is an SI2, though I think what makes it an SI2 is an inclusion, not the natural.
P

Glitterata I bet you were happy when you found out you had not chipped the diamond.

The growth lines or whatever they''re called on the natural are cool to look at.

Pyramid, I was just working on a diamond which illustrates some of what we've been talking about.

This photo shows an "inclined" natural, which is at an angle to the girdle plane, effectively reducing the width of the girdle. The girdle is "very thick", but the natural leaves only a "medium" portion of the faceted girdle at the top.

In this case the natural doesn't threaten the structural integrity of the girdle, like an inclined natural which leaves only an "extremely thin" portion of girdle remaining would.

If this natural were at the same angle and plane as the girdle, and contained within it's width, then it would not reduce the width of the girdle, and would still be considered "very thick" instead of medium there.

You asked on another thread how much of an angle it takes to consider a natural an "inclined" natural which effectively narrows the girdle. An angle of 10 degrees or more is substantial enough to create this scenario. 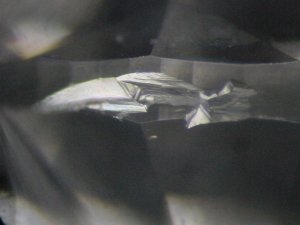 This photo illustrates a shallow indented natural which is completely enclosed within the gidle width. As such, it does not effectively reduce the width of the girdle, but if visible from face up would affect the clarity grade of the diamond. 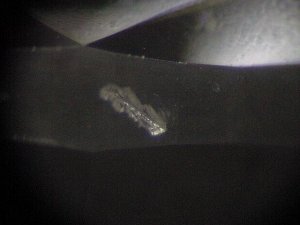 Thanks Richard Sherwood. In the last picture would the indented natural affect the width if it had been on the edge of the girdle instead of in the centre?

If an indented natural makes the girdle very thin in a very small area and the rest is med. is it better to set the natural under a prong? near a prong? out in the open? out in the open on the side least likely to be hit?
........... Karl has joined the diamond trade and is now posting as Karl_K

kewl pictures Richard thank you :}
........... Karl has joined the diamond trade and is now posting as Karl_K
P

Date: 7/11/2005 8:15:55 AM
Author: strmrdr
If an indented natural makes the girdle very thin in a very small area and the rest is med. is it better to set the natural under a prong? near a prong? out in the open? out in the open on the side least likely to be hit?
Click to expand...

How much rain did Dennis bring?

Date: 7/11/2005 8:15:55 AM
Author: strmrdr
If an indented natural makes the girdle very thin in a very small area and the rest is med. is it better to set the natural under a prong? near a prong? out in the open? out in the open on the side least likely to be hit?
Click to expand...

It depends on the setter. The trick to protecting an area like that with a prong is for the setter to burr out a recessed area in the prong so it does not touch the "very thin" area. The prong makes contact above and below the fragile area but not on it.

Many setters haven't caught on to this, and notch the prong like they would for a non-fragile girdle area, with the inner surface of the prong touching the girdle. This is fine for normal diamond setting, but not for protecting a fragile area. A blow to the prong would transfer force directly onto the fragile area.

As prongs often take a hit, I would say it's only good to prong a fragile area if the notching is done correctly. Otherwise you're better off leaving the fragile area exposed, preferably "near", but not too near, a prong. Or, as you suggest, "out in the open on the side least likely to be hit". It's much less likely to receive a blow in these areas than if it were under a prong. The prongs function something like car bumpers, taking most the blows which come at the diamond from different directions.

There's another area of confusion regarding protecting delicate areas with a prong. You often hear of a "feather" being pronged for protection. In actuality, this is the worst thing you could do. It's asking for trouble, with any blunt force to the prong being transmitted directly to the feather. Better to leave the feather exposed than prong it, reducing the chances of it being hit. It's much harder to hit a feather in a "recessed" non-pronged area than one directly under one of the "bumpers".

This is especially true of feathers which break the surface of both the crown and girdle. There's no way to safely prong it. Either the upper inside surface of the prong will be touching the feather, or the middle inside portion, or both.
Rich, non-Independent GG Appraiser
Sarasota Gemological Laboratory

Thanks Richard exellent answer as always.
........... Karl has joined the diamond trade and is now posting as Karl_K
P

Thank you for this explanation too.


"near but not too near"

How near does this mean, should it be right up alongside the prong or a few millimetres away?

How near does this mean, should it be right up alongside the prong or a few millimetres away?
Click to expand...

You want it far away enough that force to the prong would not be transmitted to the fragile area, yet near enough that the prong acts as a "bumper" for it.

A lot would depend on the size and nature of the fragile area. If it''s small and contained, you could go closer to the prong. If it''s larger and more delicate, you''d want to give it some distance from the prong. The size of the stone would influence this as well.

It''s a judgement call on the part of the setter, but would probably range from 1 to 3 mm.
Rich, non-Independent GG Appraiser
Sarasota Gemological Laboratory