Men will spend a lot more money on engagement rings if they hear that there are fewer eligible women nearby, according to a new psychological study. 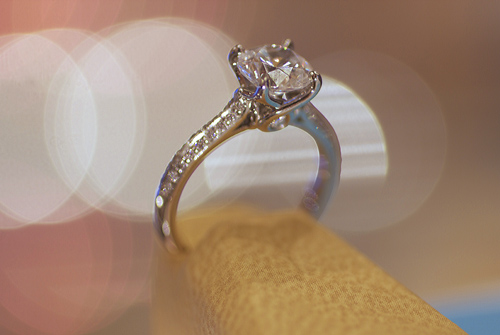 Examiner: Jennifer Aniston’s refusal to show her engagement ring has people wondering why

Jennifer Aniston’s engagement ring from Justin Theroux has become the subject of much speculation.

Idex: The End of an Era, Oppenheimer Is Out of De Beers

On Thursday, Anglo American completed the acquisition of the Oppenheimer family’s 40 percent shareholding in De Beers, bringing to an end the family’s 80-year reign in the diamond industry.

On Aug. 22, the Securities and Exchange Commission passed a rule that will require publicly-held companies to disclose whether their products contain conflict gold from the Democratic Republic of Congo or surrounding countries.

It may be money down the drain, but for those with cash to spend, nothing says luxury like a 24-karat gold and diamond sink.

Courtesy of Hello! Canada, we have some of the exclusive shots the magazine was able to snag with the couple immediately after their engagement (including an image of the ‘Complicated’ singer’s massive ring).

On Aug. 10, a New Jersey federal court gave the go-ahead to send out the first checks to industry members in the De Beers antitrust class action settlement.

Platinum futures climbed to a six- week high on concern that clashes between police and striking miners will spread in South Africa, the world’s biggest producer of the metal used in pollution-control devices in vehicles.

The Times of India: Diamonds are forever? India records all time growing sales in diamonds

India is fast emerging as a diamond market behind America. “By 2020, China and India would account for one-third of the total diamond market worldwide,” Stephen Lussiere, global chief executive officer, ForeverMark said recently in India.

“The End of an Era, Oppenheimer Is Out of De Beers”