Panhandling for Love: Denver Man Gets a Free Engagement Ring

Would you panhandle for love? According to a 9News.com report, a Denver man did exactly that. 26-year old Corey Fontenot stood on the side of the road holding a sign asking for help to buy his girlfriend an engagement ring. Fontenot collected over $80 and also received a surprise from Sonny’s Diamonds and Jewelry, a diamond engagement ring.

The jeweler reportedly has a soft spot for romance, and Fontenot said he plans to give the money he raised to Sonny’s. Fontenot also said that he has a job, but one that doesn’t pay enough money to buy a ring.

“They completely blew me away,” said Fontenot in the 9 News report. “They gave me an amazing ring. I plan on using it to propose to my girlfriend in October.” 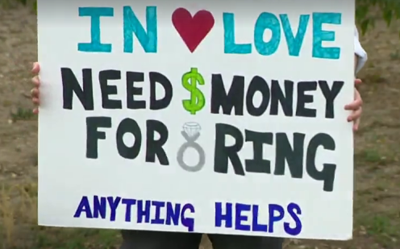 Looking for an engagement ring on a budget? Check out these budget-related forum topics:

How much should I spend on an engagement diamond?