Okay, I am one step closer to my engagement ring, but I keep encountering problems along the way. The latest dilemma involves the setting. I went to some local jewelry stores and found a setting that I liked. It's a simple european shank with four pleated diamonds on each side. The band is about 2-2.2 mm and it's just got a simple four-prong head to hold the stone. I really liked this band for it's simplicity, and I felt like my gf would really like it too. Unfortunately the jewelry store only has it in white gold, I want to get it in platinum. They said it'd take 4-6 weeks to order from the manufacturer in platinum. Otherwise they can use the white gold one as a model and custom make it, that would take 3-4 weeks. The white gold setting is $700. To order from the manufacturer would be $1500-1800, to get it custom made, they quoted me a price of $1800-$2300.

I spoken to Quest Jewelers, they said that they can make me a similar setting for around $1700 and it would take around 3 weeks. So, questions:

First, has anyone worked with Quest before and what did you think? I like the idea of having first hand input in the design and being able to change things up if I don't like it. But I'm also a bit worried that the finished product won't look like the CAD images.

I like the convenience of getting it done locally, but I think I'm paying too much for what is really just a very simple setting. I've looked around to many jewelry stores around the Chicago area but can't find anything in stock that's similar. Anyone have any suggestions? Perhaps I could get the white gold now and upgrade later? 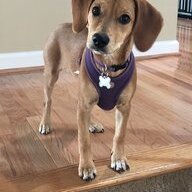 I worked with Quest (Pete and Huan) and love my new e-ring setting! They listened to me and gave great suggestions. I was told 4 weeks for my setting and it was done in 2 1/2. I would trust Quest with any jewelry project; they''ve now done two for me!
M

why don''t you keep looking around and keep your options open?

seems like the price jump from the white gold to platinum is high.

not an expert on this, but my ring setting was quoted at $1500 for white gold and $1900 for platinum, not as steep a jump as yours.

there are so many settings out there you might find the "same" or even something you like better, but sounds like the prices you got quoted are inflated, i''d be skeptical.

i thought i loved a setting for a few weeks, then fell in love w/ another a few weeks later...

Can you show us a picture? I''m thinking I''ve never heard the term "pleated" in relation to a ring. Maybe some people around here know of somewhere that carries a similar style.
M

DS, I've heard the term "pleated" a few times from local jewellers. I think they are referring to beaded diamonds as opposed to a channel setting. I don't know if I'm using the term correctly. Unfortunately I don't have a picture of the setting. I described it for them, and hopefully they understand what I'm hoping for.

But here's a picture of a ring on PS that I liked and I wanted to make it a little like that. But different diamond accents, instead of the clusters on the side I'm just going with 4 diamonds on each side in a row. I like the European style shank and am going to have it raised a little bit like in this photo. But with the head, I'm going with a four-prong basket shape. We'll see how the CAD image comes out. After that I can tweak it a bit.

February Bride, if you don't mind me asking, is your quest ring the pic in the avatar? Do you mind posting more pics of your ring. Just want to get a feel for their craftsmanship. My good friend got Quest to design his e-ring for his wife so I know I'm in good hands. But still would like to take a look. 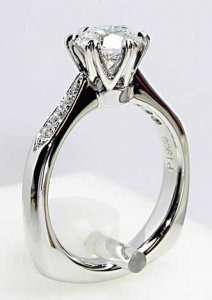 Okay, that is bead-set. Beautiful ring by the way! Look on this thread of custom rings to see some samples:

That setting I noticed says 900 platinum...it looks a lot like Mark Morrell work. He would take longer than the estimates you have, but he surely could duplicate the quality level of that ring.

ETA: I thought you said they only have it in 18k? Is this the catalog picture of the platinum one?) But I'd order this one in the 900 plat. over having it custom made by someone else who uses 950 plat. It is softer and will scratch more, which matters on a highly polished design. It is also an unknown what it will look like with anyone else trying to duplicate it. I'd really recommend getting it from the ones who you know make it exactly like you want it.
M

DS, thanks for that link to the Quest pieces!

No, the picture I posted I just found on PS and it''s just someone else''s ring that I liked. It may be the catalogue shot, I''m not sure. But mine will be different from that. I think, at the very least, the Quest thread helped put me at ease that I''m in the right hands. I will ask Pete whether he will be casting my ring in 900 or 950 platinum. If I was getting an exact duplicate I would agree with you, go to the people who know how to make it exactly. But I''m going with my own design, so hopefully they can create something that will really take her breath away.

But I''m sure you''ll be in good hands! Come back and show us the finished ring!