I think, quite honestly, that I just don't like Tahitians. They are lovely, very "shiny" said DH, and my DD likes them. I am just not into it.

I thought maybe it was because they were multi-colored, and I tried to imagine; what if the whole strand was this one color? I picked out one of the amazing colored ones (there are AMAZiNG colors) and visualized a whole strand. Meh. The luster is amazing, very strong, but they're still Tahitians.

I think I came to this conclusion last year, when I was picking a birthday bracelet, and I ended up with a golden bracelet over a large selection of Tahitians. I guess I just don't think pearls are all that exciting unless they're golden? DH says I'm just spoiled and he was very impressed with the strand. Considering he doesn't usually pay attention, I guess that's good. DD says they're very nice and she thinks I should keep them. I do like the extender a LOT, and will always do this for pearls from now on.

I was kind of intrigued with a couple of the bright silver ones, though. Maybe a strand of those? I think I was also spoiled by size of the goldens that I bought from Jose last year; those were just over 12mm and these are only 11mm. I like a "big fat look" on my pearls, and these are a tiny bit more of a "normal" size. Overall, I prefer my goldens, but they cost almost 3 times as much (DH was quick to point out).

So, I think these will go back on Monday, but I'll give it the weekend to think about it. They are intriguing, and change a LOT in different lights. They're as changeable as a colored stone, which is odd. My bracelet from Sarah (which doesn't have near this luster, but is a multi-color Tahitian) doesn't change as much. I like the bracelet because it's like a toy I can look at and play with, but a necklace is supposed to compliment my face. The goldens light me up, this is kind of meh on me.

I should mention Jose had great service, I ordered them on Wed, and received them on Friday. He strung them and added the extender in a couple of hours.

Okay, too much rambling, I took some pics in different lights for everyone to enjoy.Just the cell phone, though, so not a lot of detail. They look way prettier in RL, but I didn't want to get out the camera. 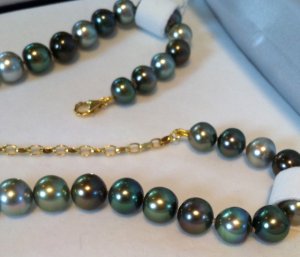 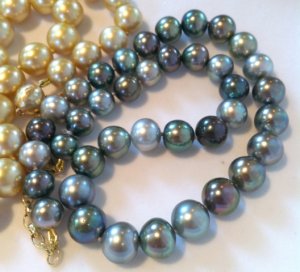 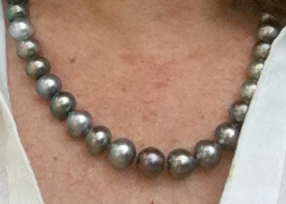 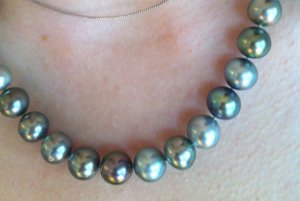 “Integrity is doing the right thing, even when no one is watching.” ― C.S. Lewis

So sorry you are not thrilled. I have an idea. Dark T's need to be worn with darker colors not pale colors IMHO. Try them on with different color tops. Maybe black, blue, green, copper, magenta or purple. or even hold them up to your different tops in your closet. Some colors will suck the color out of the pearls and others will just make them pop. When you find the right color to wear with them your mind might be changed.

When I got my mourning strand of T's to wear with black they just came alive when worn with black. My favorite color to wear is navy blue and when I would put the mourning green strand on with blue all the color was sucked out but whe I would wear it with black they would come alive. Amaizing to see the difference. That is when I started getting different solid color strands and got myself hooked on T's. Now I have 8 T strands including my famous blue body T's that look perfect with navy blue.
4 RanchGirl

I dont like this strand, while I do like tahitians. Both the large variance of the colors and the weirdness of the out of round pearls makes it all just incoherent to me. Hard to imagine me saying that, huh? well If the weirdness was brought out to the center stage then weirdness might be a fine subject for a strand, but this one I would return
When the people shall have nothing more to eat, they will eat the rich. 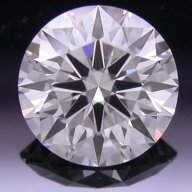 I don't care for this strand myself. I would prefer to see something a little more toned down. But it's a highly individualized decision, so you have to go with what feels right for you. If you're meh about it, then better send them back. But maybe this just isn't the right strand of tahitians. . . .and there is a perfect strand out there for you.
B

I think that particular Tahitian strand is wierdly greenish, at least in photos.
I can also see how Tahitians in general wouldn't suit someone who looks best in golden pearls, because I am one of those people. I do have one black pearl on a pendant (hangs far away from my face) but I stick with golden, ivory and pearls on the peachier side of peach/pink.
I would guess that you would be flattered by chocolate pearls, if you want something dark, rather than Tahitians. I think they look dramatic and very nice on some women, but not on everybody and not on me.
Black Jade

I guess that you are just our golden girl, iLander.

I normally love shapes that are not round, but these out-of-round shapes are not pleasing to my eye. If the color doesn't work for you, then return them.

Do try laying them against different color tops, though. It is fun to see how different the same strand of Tahitians can look against various backgrounds.
****** Life is a Journey, not a Destination. ******

Re: I Just Don't Appreciate Tahitians

Those were some great suggestions! They really do transform with different shirt colors. Wow. And I think it helped me realize that this particular strand might not work for me, but I shouldn't throw the baby out with the bathwater and dislike all Tahitians. I saw a strand on Jose's site that is really pretty, and a couple of pearls on this strand were this color;

http://www.tahitianpearls.biz/Jewelry/tahitian_pearl_necklace_tnyp.php Gorgeous, sold and way out of my price range. But maybe he'll get one like it soon in an off round. I can ask.

This strand was very helpful as a sampler of lots of colors. I learned that I just don't like a darker pearl. I'm more of a light to medium person, without brown tones, more of a silver/blue person. I'm also actually also considering another strand of goldens, lighter in tone and a bit smaller than my current ones. Or even light gold akoyas, like my great aunt's pearls. I'll have to call for options. The luster on this strand is pretty spectacular though, and I don't know if I'll come across that level of luster again. They're shine-across-the-room kind of luster.

Sigh. I wish I could just fly over and paw around in the safe!

BTW, My photos seemed to make the off-rounds show up much more than they do in real life. If you look at the photo of me with the white shirt, that gives a more accurate impression of the roundness. And it washed out the color, so no white shirts, live and learn. The photo on my DD has weird shadows that exaggerate the off-roundness, it's not what I see.

Sigh. I seem to like the really expensive stuff, that may be the REAL issue. . .
“Integrity is doing the right thing, even when no one is watching.” ― C.S. Lewis

Sorry this strand was not what you wanted. I love multi colored strands, buy all my strands have more colors than this one does. Will you get a white one instead?

NacreLover said:
Sorry this strand was not what you wanted. I love multi colored strands, buy all my strands have more colors than this one does. Will you get a white one instead?
Click to expand...

Actually, I've sent this back to Jose, and he's going to switch out some of the pearls and we'll see how it looks. I'm keeping the deep rainbow purple in the middle, but getting rid of the other purples on the side. Also, the natural pale chocolate ones have to go. They might be rare, but they're bothering me. I was beguiled into trying again because they are all so rainbowy and pretty, one looks exactly like a soap bubble. You can see it in Jose's original photos (in my link) but not in my cell phone pics. He says he has more of the same luster (you can wave your hand at the strand and see your hand reflected like a mirror in each pearl) and it'll be easy to switch out to more peacocks, blues and greens. Also, I'm giving up the extender (I realized I kept wanting to wear it at the standard 18 inch length) and going to 18 inches. It'll just be a tiny bit more for the extra pearls. When it's done, I'm hoping for a bluish, greenish, silvery strand with a wild purple in the middle.

My fingers are crossed . . .
“Integrity is doing the right thing, even when no one is watching.” ― C.S. Lewis
You must log in or register to reply here.
Be a part of the community It's free, join today!
Jewelry Blog