Hey all. If you have a moment please watch this video and give me your opinions on the stones they videotaped for me. I asked them to find a cushion that performs like a round brilliant. The square hearts and arrows seemed like a great solution but its a tad out of my price range.

also please give me advice on the setting I have chosen. She wanted pave diamonds on the side (but not all the way around)

Any advice would be appreciated. Thanks all.

Pulled it up, wow, did not expect it to look like that. Culet! Leakage at edge: I think I perceived some dullness there. Looks good.
G

yea, its pretty unique. Ive never seen a cushion like it. GOG says it performs better than any cushion they have ever had.

I'm slightly concerned with the culet (.5%) but I couldnt notice it in any of the videos

Here is the stone for anyone else who wants to chime in http://www.goodoldgold.com/diamond/2665

I thought it was like GawdIam(A)n-d-Idiot a clever diamond twist.

Do you have an opinion on the setting?

Eek. I think my favorite cushion setting right now is a halo with square emeralds channel set in shank.

But if not halo, I think a thin, pave style band is always a fine choice, either bead-set, shared prong, or "fishtail" pave.

This is my perfect (for now) bead-set:
https://www.pricescope.com/community/threads/my-new-cushion.52757/

And the fishtail (Lynn''s was inspired by another Whiteflash fishtail ring)
https://www.pricescope.com/community/threads/finally-gorgeous-new-fishtail-pave-set-from-wf.46129/

The Stuller one is nice, too. It looks a little prongy at this magnification, though.

Here is the helium data ASET image from the gem file.
I think it would certainly give a well cut princess cut a run for its money in the performance department. 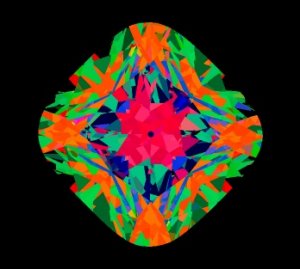 I like the setting it goes well with the stone and sounds just what she wanted.
........... Karl has joined the diamond trade and is now posting as Karl_K
C

If you don''t mind my asking -- what is the price for #4, the H&A cushion? I''ve been curious b/c all of their H&A cushions only say "price available on request."

I doubt you''ll see that culet much at all with the naked eye, it''s pretty small. If you hold it up to the light you''ll see light come through, but looking down on a finger you''ll just see sparkles. I can barely see mine when I''m looking down into it and it''s way bigger than that. I do like #2 - it has an interesting cut. #1 is definitely a crushed ice look and will give little glittery sparkles. Some people like that. Mine has a bit of it and I really like it though I don''t know that I would if the whole stone only did that. IMO Jon didn''t give #3 a fair shake since it was between the other two he admitted he had bias for. #3 has the largest chunks of fire if you like that sort of thing, but also the largest chunks of dark. IME they aren''t dark all that often - they''re usually filled with some sort of light either reflection or refraction.
Sara

The most beautiful experience we can have
is the mysterious - the fundamental emotion which
stands at the cradle of true art and true science.
~ Albert Einstein ~
R

I just watched your video - WOW!!! #4 was spectacular!!! #2 was my second choice and VERY beautiful! I love the high crown and the shape.

Date: 12/13/2006 10:43:07 AM
Author: strmrdr
Here is the helium data ASET image from the gem file.
I think it would certainly give a well cut princess cut a run for its money in the performance department.
Click to expand...

I do not like the ASET without back because as you can see here you do not get the full picture light.

The stone does not have light return scores that are as good as well cut princess stones. It has a better spread than most princess - but 6% worse than a nice round. It will look smaller however because the crown is leaking near the edges.

It is essentially a old cut type with the facet structure of a modern brilliant. A round of the same diameter 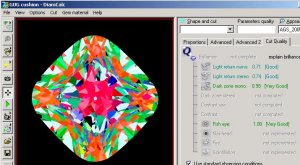 should I take it that you didnt like it?
G

JulieN, I owe you a drink or something. That setting you suggested was fantastic and all of her friends love it. I decided to go with it. I also chose diamond #2 which was the 1.58 H VS2. I love the look at it and my girlfiriend will love the performance.

That picture has heart prongs, so specify if you want them hearted or not (I think they will do minor customization.) Also, a wb will not sit flush to that setting (though a custom band could be made to sit flush or she might not mind a gap.)
G

I dont know about it not sitting flush. They are making the ring from scratch and needed the diamond specs so who knows.

I got that setting for my rectangular cushion and I LOVE it. The make the setting for that exact stone. It will fit great. The prongs look like split prongs from the side but from the top if you look closely they are little hearts. But it is a classic setting not overly cute cute.

OK LOL Just noticed that JulieN''s link was to MY RING

Thanks Julie for liking and promoting my setting.
"The big four; Diamonds, Sapphires, Chysoberyl and Spinel." said a PSer.

The video didn''t show up for me. So I''m waiting on your photos.

Time will go slowly while it''s being set.
"The big four; Diamonds, Sapphires, Chysoberyl and Spinel." said a PSer.

The answer to that depends on the question.

But please see it and compare it to other stones yourself and not rely on videos made in a very poor lighting environment for distinguishing between various diamonds
Garry Holloway BSc FGAA DipDT
Sparkliologist, Jeweller, HCA and Ideal-Scope Inventor
HollowayDiamonds.com.au Ideal-Scope.com HollowayCutAdviser.com

Oh, what a gorgeous cushion!!! That is one of the prettiest ones I''ve seen on here!

I love StoneHunter''s setting! The gap doesn''t bother some people and others it does. Have you ordered it yet? We probably could come up with some others that wouldn''t have as much of a gap if you wanted more to choose from.