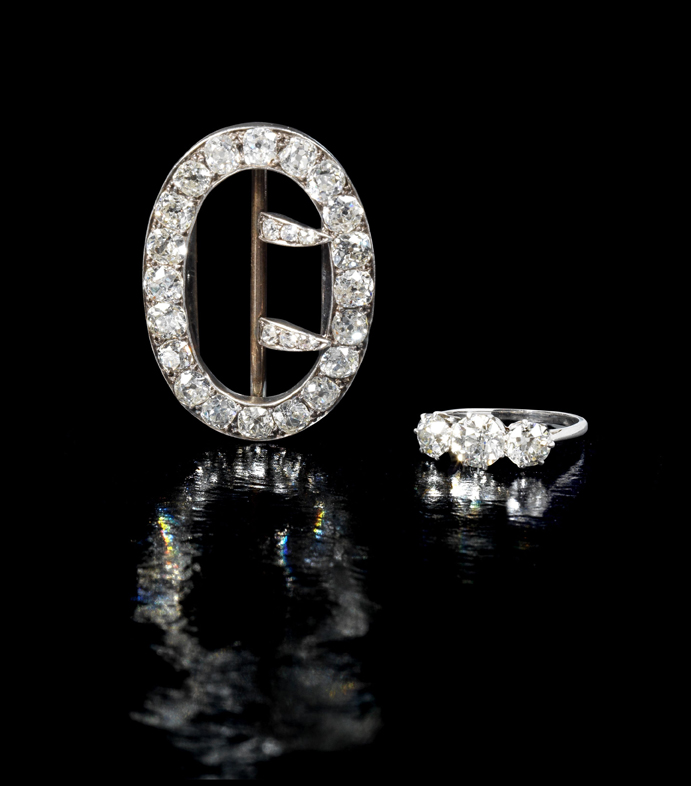 Agatha Christie’s 19th-century diamond brooch and diamond three-stone ring will be auctioned at Bonhams in October. Image courtesy of Bonhams.

Bonhams is offering diamond jewels owned by celebrated English crime novelist Agatha Christie at its Knightsbridge Jewellery auction on October 8. The jewels include a 19th-century diamond brooch and a diamond three-stone ring that were hidden away in an old trunk for years. Bidding will start at £6,000-8,000 for the brooch and £3,000-5,000 for the diamond three-stone ring.

Amongst the trees that line the banks of the sparkling Dart estuary, stands Greenway, the handsome Devon home of Agatha Christie. Even after the murder-mystery writer has long departed, her house continues to reveal secrets of its own:

When a die-hard Agatha Christie fan took part in the 2006 house contents sale of the Greenway estate, she paid £100 for an old travelling trunk which had belonged to Agatha Christie’s mother. She had no idea that locked inside lay £10,000 worth of the Christie family jewels.

Inside the travelling trunk was a locked strongbox but the key was long lost. Years passed and the box remained sealed. It wasn’t until four years later that the owner of the suitcase was having building work done and saw the opportunity to wrench open the box with a crowbar. To her delight, inside she discovered a purse of gold coins, a diamond brooch and a three stone diamond ring.

The jewels are mentioned in Agatha Christie’s biography as pieces that were earmarked for Agatha and her sister Madge to inherit from their mother’s collection. Christie writes:

“…my mother sorted amongst an array of odds and ends…all these required hours of sorting before they were packed in the trays in the various trunks.”

Bonhams to Offer a 43.16-carat Sapphire and Diamond Ring

17th-Century Diamond and Emerald Necklace for May: Bonhams Private Sale