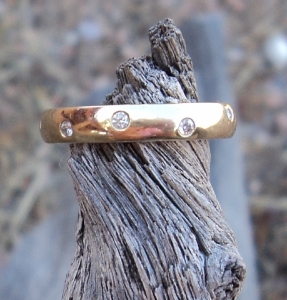 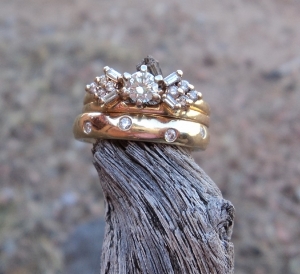 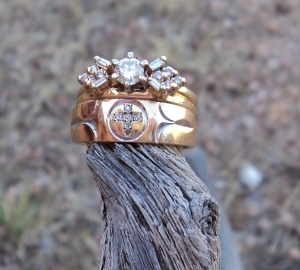 I ordered this band several weeks ago, and have had it for a while now but only just am getting pics taken.

First up, thank you Pricescopers! You have been a great help in educating me in diamonds and quality jewelry. Part of me wishes I'd never heard of PS because then the ring budget would be much smaller...and I'd be happy with the mall jewelry stores...sigh...

Second - Thank you to Bob with Whiteflash! I originally contacted WF in March of 2010 about a three stone ring. Bob and I have been emailing back and forth for over a year before I ordered my band. Bob has been extremely patient with my incessant questions. Thank you so much Bob! You have been GREAT!!!

Here's the story. Hubby and I got married on 8/8/98. I love my set, and have worn it just about 24/7 for 12+ years, save the times when my fingers swelled from pregnancy. I looked at my wedding band several months ago and realized that the constant rubbing of my e-ring (which is a 1/3 solitaire w/roughly 1/2 ctw wrap) had worn away the top part of my band. This is not good! My Wedding band is very thin (bent at the bottom), so I have switched it to my right hand to prevent anymore rubbing of the top of the ring. No, I won't flip it upside down, that would drive me batty!

I saw the scattered band back in March of '10. I loved the sleek and simplistic look of this band. I did not like the idea of making such a large purchase online. I went to Tiffany's and saw their band, but it was thin and expensive! I have long fingers, and their band was too thin for my liking. My original Wband is 7mm and tapers to 4mm, my ering is about 4mm. I also wanted something that would go with my yellow gold ering.

I went to a local store to see if they had anything. They did, however because of hit or miss customer service I decided to go with Whiteflash. I contacted Bob (again) and finally ordered my ring. It came in a pretty little box (and lots of FedEx packaging). Bob was wonderful. It was his stellar customer service that sealed the deal for me!

Ok...so I don't know how to add the other pictures!!! I have tried but am only getting the same pic (the last one from above)...anyone know how to fix that?

Edit: Ok, so I tried again (have tried about 7 times) to upload the other pictures and they aren't working. Not sure what I'm doing wrong. 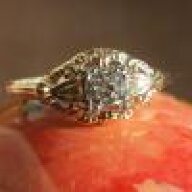 I love the Whitflash scatter band, they are strong enough to wear hiking, kayaking, skiing ect. but still have some sparkle

I think the problem you are having with up loading more pictures is that you have maxed out the amount of space on a post. You can upload more pictures if you just reply to your original post.
“We are all a little weird and life is a little weird, and when we find someone whose weirdness is compatible with ours, we join up with them and fall in mutual weirdness and call it love.”

Thanks! I think the other problem was the pic was too big....still trying to get the ones I posted to be smaller :O

Just thought I'd mention:
The order of pictures is:
WF Band
WF Band and my E-Ring (and wrap)
My original set

Specs on my E-Ring:
1/3 carat solitaire guessing L-M color (according to what a jeweler said) and "eye clean" I also have platinum prongs
The wrap is about 0.5 cttw and they are soldered together.
Both are 14k Yellow gold.

WF Band is size 7.75, but I could have gone w/an 7.5. This summer will be the true test, but it feels great even in the AM when I'm more swollen. 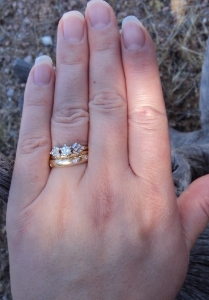 Well, that's the only one that worked. I stupidly moved the pictures and now none of them want to work! ARGH!!! 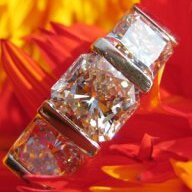 LOVE your new scattered band.
The diamonds just pop in the yellow gold!

It looks great with your WR.

Wear it in good health!
"Adornment is never anything except a reflection of the heart"
~ Gabrielle “Coco” Chanel

Congrats on the scatter band I love them

I got one about a year ago and they are made very well, I think you wont be disappointed

ETA I just realized I have mine in my avatar!!!

Thanks!!! I've drooled over yours! Love the look of them, and I could wear it on it's own (but I probably wont)
B

Very nice!!!! It looks great with your ering! Congratulations

The scattered band looks great with your ering...and I so can agree with what you are saying about not finding PS.
I really think its my DH that hates it! Enjoy your new look!
~~~Thanks to PS, my wants far exceed my budget!~~~

Now that looks beautiful!! I love it with your ering- congrats!!

Your new band looks fantastic with your Ering - the difference in width and style is definitely eyecatching!
Some circumstantial evidence is very strong, as when you find a trout in the milk.
~H.D.Thoreau

I love scattered bands and yours is gorgeous! It looks great with your ering too.
Marcy
If I woke up in the morning and nothing hurt I might think I was dead. 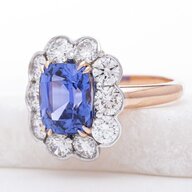 They look awesome together!! I love your ering/wrap set, kind of a gorgeous twist on a 3 stone - LOVE IT! And your scatter band is to die for, I love mine, it's easy-to-wear, comfy bling, congrats!! 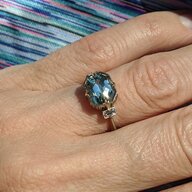 Congrats on the new band, it looks great with your ering