Tracking Down a Pendant

The attached picture is of a pendant I'm trying to locate, I realize it isn't the best picture but wondered if anyone had any thoughts? It has similarities to a Tiffany Atlas pendant but I'm pretty sure they don't do anything that matches, similar but not the same. Notice it seems to have six numerals on it rather than the four the Atlas usually has, it's also larger and an open circle. Tiffany have one that is two rings with numerals between them as well as one that is large numerals but on like the picture is my quest.

Do you guys have any ideas as to how to go about trying to track this down? I've browsed thousands of google images without much luck. 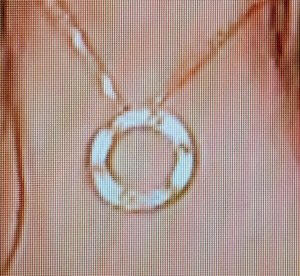