Time to get a new setting?

Ok, I've had my ring for a little over a year. It's in a four prong custom setting that was designed to be similar to a Monique Lhullier setting on Blue Nile. I really like the setting. The prongs have a bit of an open tulip type design. However, due to the design, the prongs don't "hug" the diamond from the shank.

Thus presents the problem - I am super clumsy, and have frequently knocked the prongs on the ring on various things. I've knocked it around so much that the diamond becomes loose and it spins. I've had it re-tightened twice. But I just knocked the diamond loose, AGAIN.

So, now it's sitting back in the Mrs. Box because I don't want to lose the diamond. I didn't have this problem with my old Novela b/c the prongs were thicker and sat flush with the diamond.

While I would normally be willing to spend some money to get a platinum setting (ahem, Erika Winter's Laurel Cathedral catches my eye, or even the Margot), I um, have recently placed an order for a custom wedding band...so I don't have the funds for a nice platinum setting at the moment.

Do I admit defeat and get a different style setting that will be better suited to my clumsy nature? And if I do, should I just go with a cheap white gold setting instead of platinum so I can save up? Or should I just get it retightened again?

Would appreciate your thoughts... 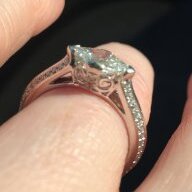 would wearing your nice new custom WB for a while be something you could do until you can save up for the setting you REALLY want? I'd either do that or have a local jeweler order an inexpensive Stuller WG setting to temporarily set your diamond in until you save for THE setting you love. 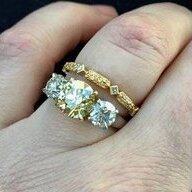 Agree with above. I would probably just wear my band until I could save up for what I really want! I've actually been doing the same. Whether I would get a temp setting or not would depend on how "close" I was to being able to pull the trigger on the new setting.

In all honesty, I enjoy wearing my ring, so wearing just the wedding band might not be enough for me. And there's some other things which are taking priority with the funds over saving up for a nice new setting.

I guess I can look at some cheap temp settings to see what it would cost.

Stuller has some nice ones. What are the specs on your stone?
"So often in life, things that you regard as an impediment turn out to be great, good fortune." -- Ruth Bader Ginsberg

Gypsy, it's just a shade under 8 mm. 2.1 carat AVR. I just prefer settings where the diamond is not set super high, because it'll be more prongs for me to whack.

The wedding band will be rose gold...so going white gold may be a good fit.

You can get the 14kt X1 alloy so it doesn't need plating. GOG could get any of these for you. Or any local bench you trust.

How about giving a bezel a try as a temp?

I mean if you are getting a temp, it might be worth it to get one that lets you try something new on for size. You can call Yekutiel at IDJ or David Klass and ask them what they'd charge you for a "super low, super thin bezel solitaire with a 2mm shank for an 8mm round stone in 14kt white gold). 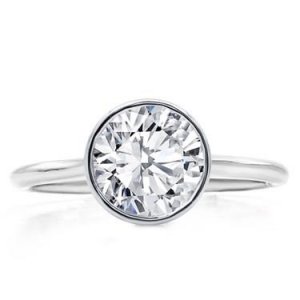 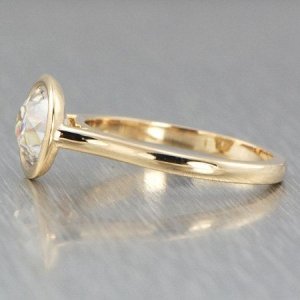 What's 14x1 alloy mean? (You can tell I've always been a platinum person)

The second Stuller setting catches my eye. I didn't think about a bezel before, but now you have me thinking.
Another thought has also occurred to me - how will the setting complement the new band. The bezel might look better.

It's a special white gold alloy that keeps the metal from yellowing, so you don't need to upkeep its rhodium plating. The low set bezel settings Gypsy posted are simply awesome! Do note that being low set, the ring will probably not sit flush with your band.
Sometimes the mind ignores what is logical because the person cannot accept the reality of what it is.

Thanks, Chrono for the info about that alloy.

I was going to keep the band thing under wraps, but I'm getting one of the Erika Winters band in a half eternity style - the Liv. It will have a straight edge across the middle of the band. So damn, I wasn't thinking about a low setting and a flush fit. Since the current e-ring allows a metal band to sit flush, that issue hadn't occurred to me. The new band will be slightly wider than 2mm, so maybe I should think about a knife edge to keep the set more slim.

Why can't these things be so simple?!!

No, I think you could get a flush fit. Even if it's low. Just make sure you ask for the stone to be set as low as possible and still accommodate your band.

I ADORE the Liv (I love ALL her stuff though) and think a bezel would be PERFECT with it.

Have you seen the IDJ thread on hangout? You can see their bezels on there. If you call Yekutiel tell him I sent you because he said he can do thin bezels (I just talked to him earlier this week about that).

You can even do a brushed finish on the setting (OMG, to die for).

X1 is an alloy of white gold that does not need rhodium plating. So like platinum it is white by itself and stays that way.
"So often in life, things that you regard as an impediment turn out to be great, good fortune." -- Ruth Bader Ginsberg

So, popped into a local jewelry store just to try and get some ideas. Decided that I wasn't feeling the full bezel. However, the semi bezels did speak to me. Then I remembered how I liked Sholdt settings, especially that Vashon. I remembered there was one in rose gold with a brushed finish...Since I'm from Seattle originally, the name actually means something to me as well.

I also seemed to be drawn to split shanks that taper.

Thanks for your ideas. I am now thinking that when I get a more permanent setting, to think about some semi-bezels or a split shank

Thing2 has a gorgeous sholdt semi bezel for her OEC.

Not too expensive. I think maybe you should just forgo the temporary setting and save up for one of these.
"So often in life, things that you regard as an impediment turn out to be great, good fortune." -- Ruth Bader Ginsberg
You must log in or register to reply here.
Be a part of the community Get 3 HCA Results
Jewelry Blog