This is how it is called back home. It has an inscription on the back dated by 1956, which means that it was given as a gift to my father, but my father says it belonged to his father... Anyhow, I decided to post it here because the precision of the work is amazing! It depicts an ancient Russian warrior. There was a stone cab. on its side that served as a fastener, but my son who now owns the piece lost it. No big deal because I have enough stones to for replacement... 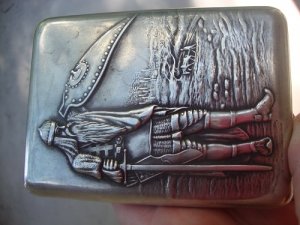 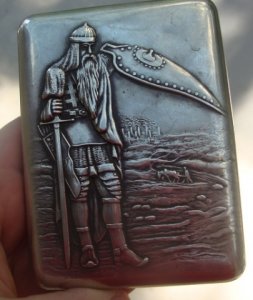 The detail is neat, Crasru -- the guy plowing in the background. It looks almost more like the 19-teens to me, the days of Romantic paintings, etc. Could be older & given in '56 to your father. What was the cab on it?

Those are nice to have -- I have one that belonged to my grandfather, engraved with flower & plant designs. It used to have a piece of elastic inside to hold the cigarettes in place but that disintigrated. I keep it on my grandmother's writing table in my study & wonder what it's seen whenever I polish it. Wonder about your dad's too!

Jewelfreak - thank you! I do not know what the stone was; either an opal or an included cab. amethyst. It was dark.
It has been polished many times and yes, we take good care of it. As I have said, now it is in possession of my son as many other things from my dad's family.

Sellilng1 - Thank you! We do not have many things left, mostly because too may things were purposefully destroyed during and after the revolution. Silver icons, etc. My grandfather was an officer in the Russian army and participated in world war I. As the result, he always had to move and to hide everything that would indicate his past. He was a POW in a German camp in 1914-15 and brought home a Zauer rifle as well as an old clock. The rifle was kept in the family but had to be sold in the 50-es because they needed money. The clock is still there but it is hard to bring is here so it goes to my neview. Same with a monstrous "Samovar" from 1915. But smaller things, such as cufflinks, jasper inkblotters, silverware from the beginning of the XX century, etc, etc. went to my older son.

Crasru, that is absolutely gorgeous. Quality-wise, it's right up there with Faberge: I've seen a few of the more traditional cigarette cases that came out of his workshop that had nuthin' on this one. What a wonderful heirloom to have ....
www.otherwise-engaged.com

Part Deco, All Fabulous
You must log in or register to reply here.
Be a part of the community Get 3 HCA Results
Jewelry Blog