Hi - I am computer illiterate so I hope I am able to do this right.

Does anyone know of any designers that do this type of thing?

The best pic demonstrating it is on the varna website but I cannot copy it to my computer.

http://www.varna.com/
our jewelry
Reale collection
the contessa pops up as the first ring when you click on Reale

Any ideas of other designers that do this type of thing?


I will try to post a couple of other pics that I was able to copy off the internet.

Here we go... Thanks in advance 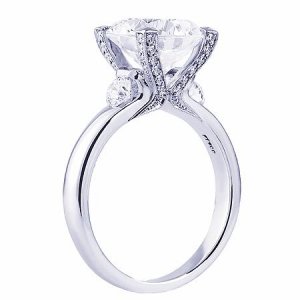 Oh my God! I am so excited! It actually posted! I have never done that before! Holy Moly!

Thanks Belle for your instructions in the FAQ section!

This does not show the swoopiness as much, just a different angle of the ring. 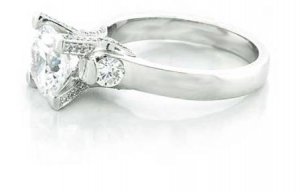 If you look at the first pic you can see the bottom of the head with a little curved space between the prongs and the pavillion..

I''m sorry that I can''t help you find that setting but I just had to say its gorgeous!!!! I shall keep an eye on this thread so I can see where you get them!!

do you want prongs with diamonds too or that''s the part making you want to look more?
Pricescope

Hi!
I do think the diamonds on the prongs are very pretty - I was just wondering if any other designers had other designs with this type of head.
The hesitations I have are:
1. it is 4 prong and I would like 6 for security (my mom lost her diamond when I was little, luckily my dad found it), although the 4 prongs here are very sturdy appearing (I have seen the ring in person). They do also give a squarish appearance which I am not sure if I like or not. (they wrap in a 90 degree angle on each prong at the edge, emphasizing a square effect to the stone/ring) I think I like it, but I am not sure. Maybe I just need to see it again.
2. the side diamonds actually appear sort of unnecessary (dare a PSer say that?

)- they don''t seem to add much and are actually hard to see tucked under the curve of the ring - I did think about maybe changing to blue sapphires instead but I am not sure I feel it actually needs something there
3. the band width is wider than I would like - the ring itself appears to need the width to balance out the head and to be wide enough so that the side diamonds do not stick out over the edges of the ring. I usually like thinner bands, although the band appears appropriate for this ring.

I guess that was why I was hoping maybe there were other designers that may use that type swoopy pavillion thing!

Got you , did not find anything yet, but if you don''t mind going custom i can make a photoshop of your desirable elements.
Please let me know.
Pricescope 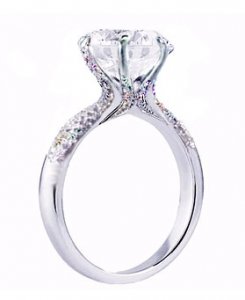 leon mege would do a nice job

Oh, Irina, You are so sweet! Thank you! That is very pretty!
KCoursolle - I admit LM did cross my mind too!