background is that my fiance and i just ordered/received our custom made halo engagement ring and while it is BEAUTIFUL and i love the pave on the halo and the execution generally, there are a couple things about the gallery and shank that I'm having trouble with. most problematic is that while I expected/wanted a round shank, there is definitely a knife's edge sort of quality to it in that it is taller than it is wide. I understand that this helps strengthen a thin shank, but it is really really uncomfortable on my hand. (Proposal/placeholder ring was a classic tiffany-style knife's edge and while beauuuutiful, I wore it for a weekend and it drove me up a wall.) In addition to being quite uncomfortable, I think it also makes the shank look heavier/taller than I like.

so my question is, what kind of changes are reasonable to request a jeweler make after a custom/hand-forged ring is completed? Would a slimming down/rounding out of the (plain, no diamonds) shank and attached cathedral arms be a big job/require the goldsmith to remake the entire ring, including the halo head (which i would want to keep exactly the same!) and be considered a reset/revision requiring a lot of extra time and $$? I followed Gypsy and Frankientah's stories about making changes (subtle but REALLY IMPACTFUL) to existing halos and so feedback from them would be super helpful! Comfort is of course a big deal, but I feel badly that I wasn't MORE explicit/insistent about a rounded band - I think I said spaghetti noodle, but that's probably not a technical term and wanted to get a better understanding about what is in the realm of possibility before bringing it up...

so I also realize that every jeweler is different and that I will have to see what the place we're working with (Joe Escobar) says about it, but hoped for some general advice/feedback from those with experience... THANK YOU!

ok ok i'll bump with pictures! not that it is particularly relevant to the question, but it can't hurt, right? everyone loves pictures...

oh also, there was no sketch, wax or cad as part of the process... we were working with one of their sample rings which probably had the same feature/issue, but was too big for my finger and so was already not fitting feeling at the time...

hopefully this isn't a take it or leave it situation... 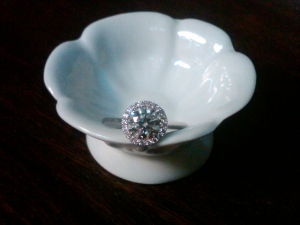 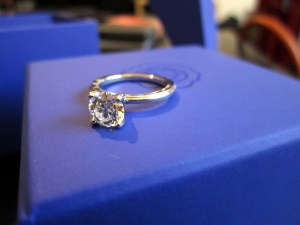 Do you have more close-up pictures of the shank? It looks fine from the side but I can't see much detail in the other shot. I tend to think all this should have been specified beforehand, though.

Knife-edge will come to a sharp point at the top of the shank. I have a feeling your ring is like mine from Leon Mege. It is taller off the finger due to the narrow width. You'll be glad about this when you try on wedding bands because it is awful when the diamond wedding band sits higher than the shank of the e-ring. I think they were wise in doing this.
M

thank you for the response! the shank is structurally/visually fine, but is definitely taller than it is wide instead of being the same width throughout - it's really a comfort thing more than a looks thing, although the look isn't as delicate as a result. i agree it should've been specified before (arg!) - we said we liked round and described what we liked about the first ring we had made which included the round shank (see another of my topics), but i didn't realize on my own that the ring we were looking at as a sample must've not been exactly round even though it appeared rounded and now that this ring is in my proper size, the knife edge effect is really prominent (feeling)... sigh.

just wondering if this is fixable after the fact...

Like you said, every jeweler is different. And the initial instructions are important, too, like did they follow your instructions, photos, descriptions? But Joe Escobar is pretty good to work with. My favorite salesperson is Eric. I would talk to them about what you want changed and see what they say.
M

that was weird - i didn't see the second half of your post before responding - that's GOOD to know that there's a good reason (including the strength factor) to do it that way, i haven't tried it with a wedding band... wonder if i'd get used to it over time, but am having a hard time with the comfort factor right now....

thanks so much swingirl! they've been wonderful so far (working with Ryan) and i'm glad to hear that's been your experience too! just want to be happy and done with the process!

They're the best people to talk to wrt what they can and can't do, at what costs. Thinner bands need need to have a certain amount of metal for durability, so that metal is introduced in height/depth instead of width across the finger, so there may be some limitations on how much they can shave off
Some circumstantial evidence is very strong, as when you find a trout in the milk.
~H.D.Thoreau
You must log in or register to reply here.
Be a part of the community Get 3 HCA Results
Jewelry Blog