I've just come home after visiting a local diamond jeweler and I'm a little confused..
He showed me two round diamonds and was very helpful in answering all my mundane questions.
He also showed me the GIA certs for both and let me write down the specs so I could put them into the HCA (I foolishly didn't write down the certificate numbers

Where I'm confused is that they're essentially identical in specs except one is a VVS2 and the other an SI1 and I can't understand why I wouldn't pay the extra $100 for the VVS2.

My limited experience tells me that the SI1 must perform really well to the eye and the VVS2 performs poorly however they both looked great in the shop!

Would one of the more knowledgeable among you please tell me what I'm missing here? Has the jeweler made a mistake with the VVS2 price?

Thank you in advance! 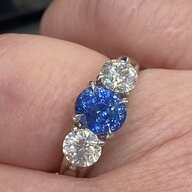 Call and get the gia numbers. I would like to see the numbers for depth, table, crown angle and pavillion angle.
O

Thanks for the advice, these are the certificate numbers: 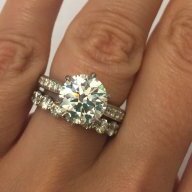 I like the numbers on the first one over the second since they are safer without an IS or ASET. But the first inclusion on the first one is a crystal and since that's the SI1, I wonder how eye clean it is? You've seen both stones in person...which is more pleasing to your eyes?

That all said, I still agree with flyingpig that they're both overpriced...you're essentially paying for the overhead cost in buying locally. Not a bad thing but if you still go this route, at least you know so!

I guess they just overpriced the I SI1 to make the VVS2 is a good ideal.
The price of VVS2 is not that unreasonsable from a B&M store. It is 0.93c with 6.30mm+ spread. The cut quality is good.

Over the years, PS has become a thermometer indicating how the consuming public thinks about diamonds. Granted, PS represents only a small percentage of the diamond-buying public, but certain trends indicate how a better informed and educated public considers its diamond-purchase.

One of the common topics here is that paying more for a high clarity (like in the VVS-range) is not worth it. It is an advice often expressed here. It leads to Pricescope overall preferring VS and SI in Clarity. On a broader scale, I see the entire US-market going more towards VS/SI over VVS and higher. And in the last years, I see also Asian markets gradually moving their preference towards VS/SI.

Internally, within our company, it has a weird effect on pricing. As a rule, in rough-planning and production, I already try to avoid finished stones ending up VVS2 or higher. Inevitable, some end up in that higher clarity anyway. And because I know they are less favored by our consuming public, I price them lower from the outset. As time passes and certain stones become 'older', prices are reduced even further. It often leads to VVS-clarity, with all other C's equal, being priced lower than VS2, sometimes cheaper than SI1 even.

The weird thing is, it does not necessarily make them sell fast. I have seen cases where the customer was interested in VS2, nicely within budget. When alerted that same weight, same color, same cut, VVS2 was available even cheaper, they often preferred the VS2. It makes me wonder: Is this a psychological reaction, making VVS-clarity automatically synonymous to expensive or even 'not worth the money'?

On a grander scale, if my observations are correct, it points to a big divide in the supply-chain of diamonds. The closer one is to the consumer, the more one feels that the distinction between clarity-grades is over-emphasized and clearly not in line with the theoretical price-difference, as per the Rapaport-sheet. On the level of diamond miners however, emphasizing that value-difference is a major factor in keeping average prices of rough diamonds high. With opposing forces on both sides of the spectrum, it takes intelligent cutting-organizations to satisfy both views.