Opinion needed about propose with one ring but promise another

I've been shopping for the ring for four months now after having figured out (with her) over the last YEAR exactly what she wants. I've had a few jewelers just flat out flake on me, show me absolute junk for the stone. or refuse to make the ring since I'm not buying the stone from them (I subsequently bought it separately so I could get what I wanted). Thus, my GF is, well, getting a bit impatient with what looks like feet dragging. I don't blame her at all.

The process of getting the setting made is taking WAY longer than I thought it would (or should IMO).

1. Buy a simple Tiffany solitaire (like on ebay for $200) that I'll just toss (or maybe resell) and have the stone mounted, then propose but THEN explain the trouble I've been having with delays in getting the setting done, while continuing to work on getting the final setting done. Upside is she'll be engaged plus she'll know I'm not lying to her with empty promises of 'someday baby, REALLY, we'll get married' and it'll buy me time and peace of mind to do the setting exactly right.

2. Keep delaying all of it (proposal, wedding plans etc) until the setting is just right (at least another 8 weeks is what I'm being told) until it's all completely done.

To my GF's credit, she has assured me many times that the ring isn't anywhere near as important as the proposal/promise itself, but being a little old fashioned, I still want to propose with a bended knee and a ring.

What would you prefer if it was you?

What would you prefer if it was you?
Click to expand...

Proposal with the "toss" ring and get the other setting when its ready.

What would you prefer if it was you?
Click to expand...

Proposal with the ''toss'' ring and get the other setting when its ready.
Click to expand...

Ditto. It''s not a good feeling for her to think you''re dragging your feet.

I wish my FF would just do it with a toss-away setting.
~
Let all the people
of the world
say what they please
I alone know what I do
~

#1. That''s essentially what FI did. And now we''re getting my forever ring made together!

Steve- if she states its more about the proposal than the ring, I would go with the toss away in the interim. Because if she honestly doesnt care, than its better to be engaged than have her stressing. I have had friends who had no idea the guy was walking around with the ring in his pocket for weeks, waiting for the right time to propose, and they broke up with him because they thought it was "never happening"

So I think if she is already getting uneasy, you should just do it.

However the reason I emphasized "doesnt care" is because a girl I worked with was mad her bf proposed with a plain, toss-away ring, and explained to her she would be getting a different ring for her. She felt like she didnt know whether to get excited about the ring and show it off to people, knowing it was changing. Obviously, she cared more about the ring.

Sorry to confuse you! Haha. But just saying it can go either way. You know your girl, and if she is just concerned about getting engaged, then I would go with the Tiffany setting as a temporary solution.

Propose with simple setting while more elaborate one being created... that way she has the engagement she wants... and doesnt have to get botox to smooth out any wrinkles she got from the stress along the process.

Waiting is agony.. but knowing there is a custom setting "surprise waiting" that could be amazing.. plus you could buy a gemstone for the simple settng and turn it into a RHR so that way she gets to keep the sentiment behind the original band...

Absolutely go with the ''toss ring''. Men have no idea how crazy waiting makes us. Seriously, just browse around the forum. Actually, a toss ring is most women''s best case scenario. Solitaires are classic for the interim, and then you can shop WITH your FI for the PERFECT setting of your dreams!

Need I reply? LOL. TOSS RING as people are calling it. although I love the idea of the gemstone solitaire to propose with and she can have it as a RHR in the future.

Not to add to the confusion, but two other possibilities:

1. Propose with the diamond, get the ring together
2. Propose with a simple promise ring and tell her the real thing is taking a while to put together, its in the works, and you just couldn''t wait any longer to be engaged to the love of your life.

I agree with all the rest of the ladies - "toss ring"!

It''ll make the experience of getting engaged much less stressful for BOTH of you! Good luck!


It''ll make the experience of getting engaged much less stressful for BOTH of you! Good luck!
Click to expand...

Do it now! Resentment can last forever and you don''t want it to get to that stage.

OMG put that diamond in a simple solitaire and propose already!!

you guys can pick out the "real" setting together!

plus you can use that plain setting for maybe a colored stone as an anniversary/birthday gift!
S

OK, given everybody said get the toss ring, I did just that. $105 off ebay (yikes - hope it''s more than Cracker Jack quality) but at least it''s sized to her size. God the stone''s gonna look huge! Maybe she''ll like it though.

yay! you got a good deal there!

hey maybe she''ll end up liking the plain solitaire and won''t even want to have the setting changed!!

good luck with the proposal!

So much better to propose now with diamond in temp setting and work the setting out later. Also, you can ask her if she''d like input into the setting or be part of the process alongside you. That can be really romantic, too!
Now a Mrs.!

well even though you already bought it...

So she won''t feel like there''s nothing to do with the temp setting (in case she''s a little romantic), you can mention after the proposal that you''d like to get her birthstone for her birthday and have it set in the Tiffany temp setting

it, TRUST ME. My FI proposed with a temp setting (yup, 4-prong tiffany-esque plat setting) and I love it so much I STILL haven''t started my replacement setting project. Honestly, the setting is so simple that it really showcases my diamond perfectly. BUT, I am planning to have it replaced eventually--I just have to decide on a setting! Too many gorgeous ones to choose from

So glad you decided to go with it, and Im really excited for you!


What would you prefer if it was you?
Click to expand...

Proposal with the ''toss'' ring and get the other setting when its ready.
Click to expand...

I agree. Only she probably won''t toss it. I''d like to bet that solitaire setting is in her jewellery box for years to come!
And then a plank in reason broke... Emily Dickinson

Date: 4/3/2009 7:53:56 PM
Author: purrfectpear
So she won't feel like there's nothing to do with the temp setting (in case she's a little romantic), you can mention after the proposal that you'd like to get her birthstone for her birthday and have it set in the Tiffany temp setting

It's win-win. Instant proposal and future birthday gem to look forward to.

I very much like the idea of the diamond in a box as well!!!!
And then a plank in reason broke... Emily Dickinson

I know you have already brought it but i agree number one.

As another solution my now FI proposed with the commitment ring he gave two years earlier. (He actually took it and I didn''t even notice

) We had already discussed that it would be ideal for me to have a little imput into the stone and settin and that was his solution. So i didn''t have a ring but i was engaged and to be honest that was all i cared about

PS. please come back once you have proposed and let us know how it went!
S


PS. please come back once you have proposed and let us know how it went!
Click to expand...

You can spend about $200-300 on a simple setting. The one is the link is heavy and stylized. That is not a toss ring at all.
S

You can spend about $200-300 on a simple setting. The one is the link is heavy and stylized. That is not a toss ring at all.
Click to expand...

Right. I bought a ''toss away'' simple Tiffany knock off online for the ''stop freaking her out and get it done'' proposal. The link above is the challenges I''m having with the ''final'' setting.

I have the same concerns as the posted there, namely about the width. FI got my ring and the shank tapers from 3.8mm to 2.3mm and I was horrified when I went to try on wedding bands because together the mm was around 6-7. And skinnier bands looked funky. Has she said she wants that thick of a shank? Also, I think you need to consider what kind of wedding band would go with that. Or if she isn''t going to wear one. Because unless she has really skinny long fingers, thick bands are going to be uncomfortable...
_______________________________

"In all matters of opinion, our adversaries are insane." Mark Twain
S

Well, it took awhile, but here''s the stone with the temp setting. She said yes . And totally understood the frustration I''ve been having. The suggestions here to use the temp ring was right on. 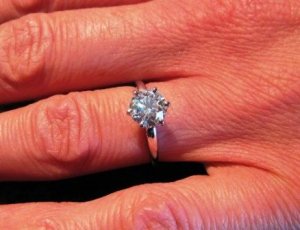 That''s wonderful, congratulations!!!! And dude, that''s not bad at ALL for a temp setting. Looks very elegant and that stone is gorgeous! Well done all around!