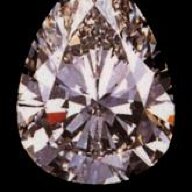 Hi! I have checked out Dave Atlas'' chart regarding fancy shapes. I am interested in a fancy shape, and saw a few stones that have a few characteristics in the 1A category, and a few in the 3 A catagory. Does this make the stone a 3A, and if so, does that mean it is considered an average/not desireable stone?

You have to give us the specifications on a specific diamond in order for us to evaluate it.
but basically you have to really see it and like it, as fancy shapes vary and every person have different prefrences.
Diamondsman

Don't rely blindly on numbers... Fancy shapes can have orrible numbers and be beautiful and vice versa...
BTW, what shape are you looking at??

The advice not to rely on numbers is truthful, but is often casually spouted as if the numbers mean nothing. That is not true. If a fancy cut diamond has parameters outside of the AGA 1 and 2 numbers, most cutters would agree that there is some "fault" that might be better if it was not present. The problem is that diamond rough and economics combine to make cutters choose how to shape a stone other than perfectly nearly all the time. That is why it is such a skilled job and not done on a production line. There is an acquired art to it.

A diamond with a Cut class 1 or Cut class 2 grade is likely to be a good looking diamonds, but it depends on the skill of the cutter and the rough stone that was present before the cutter began. Some rough has inherent limitations so don't just say it is the cutter's fault if a stone looks a bit less nice than another one.

Read the rules of use of the AGA Cut class grades, too. You will see some degree of flexibility built in which makes the system workable and useful. There are many who will advise you not to rely on numbers. I support them up to the point where you'd make a poor decision by not looking at a stone before you buy it. However, cutters have found the AGA Cut class parameters of great use in perfecting their art. These charts were not created in a vacuum or meant to push sales of faulty goods on people. they were created to be helpful, honest and useful. I think many people have gotten better diamonds because of this information and few have been hurt. No one that I know of has ever complained of any problem created by this added knowledge.
David S. Atlas, GG(GIA)
Certified Sr Mbr(NAJA)
Ideal-Scopes-ASET Scopes-Diamond tools

Dave, thanks so much for your detailed response. You mention that cut class 1 and 2 will produce beautiful stones. If a stone has some cut 1 characteristics and some 3 cut characterstics (for example, good polish and symmetry, and the table and depth fall into 3A), would you shy away from such a stone? I have seen some beautiful ovals and pears which would fall into 3A based on the system, is 3A considered less desireable in the industry?
These stones are SI1 and between E-F color.
Fancy
B

Dave is absolutely correct in his advice regarding
the AGA charts. It is a good starting point
but it is most adviseable to 'see' fancy cuts whenever
possible.