I have not seen them yet but Lesley at Whiteflash took a picture of them for me. These are going into an anniversary ring with a custom setting. For you folks who like specs here they are:

They are all ACA H&A

I am very excited.

And the idealscope images.....
thanks Lesley!

Dave, WOW! They take the breath away. I can just imagine how fantastic they will be in person. All H&A, A Cut Above too. I may have to call Whiteflash for some information about my 3 stone search. Thanks for the pictures.
--Annie

Oh wow. That's going to be a stunner! 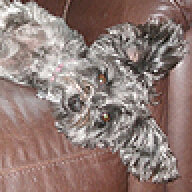 Better buy some dark sunglasses because with those white sparklers, you're gonna need 'em!!

And a custom band to boot! Your wife is one lucky gal!!!

PS Dave, I sent you a PM. Please check it and get back to me.

WOW WOW!!! Those are amazing!! Interesting, I picked out the smaller two 'old' cut ACA's..they look a tad different. The middle stone looks like a new one though. Interesting!! Esp to see the IdealScope images and how the old cut slightly differs from new. That middle stone looks amazing. I love the IS image.

This thing is going to be a knockout. Somewhat along the lines of when we were looking, we were checking out some HOF stones, and the saleslady put two next to each other in a 3 stone setting and just the 2 in that setting blew us away!! Definitely the most brilliance I have seen to this day. I can imagine that is how these 5 will look, but doubled, almost tripled.

I woul be excited too !
Congratulations !
Stephan
D

Thanks for all the kind comments. Though the diamonds are individually smaller then those usually posted here, I was going for a different look with more of a band of diamonds. They will be set close to the finger and wrap around so they should sparkle from more directions.

Boy I am glad I didn't say which I thought were which. I was wrong! LOLOL

Oh Dave, when you look at them, this is a MUST! Lay them on white paper on their sides, face out. Light a candle (or 2 for 5 diamonds), turn off all the lights, and then move around the room looking at them. It is the neatest experience!

With both the Classic and New Lines, you have the best of both worlds on that ring. It will sparkle and shimmer constantly!

"what is interesting that if you just look at the picture of the stones, the two outer (old) stones look a little more milky and less well-cut (faint arrows) than the middle stone and two next to them."

They are still showstoppers!! Do you see any sort of visual difference between the old and new cuts Lesley? Or can you not differentiate since you see these things day-in and day-out, week after week...? Lucky!

You can tell from the IS images which are which (light leakage on edges vs none at all), but what is interesting that if you just look at the picture of the stones, the two outer (old) stones look a little more milky and less well-cut (faint arrows) than the middle stone and two next to them. Interesting that the middle stone is also an older cut but it looks much more like the newer cut stones. Maybe it's just the photography on the two outer stones.
----------------
Click to expand...

Well, there you go again, Mara! I am ONE UPPED yet AGAIN!

I sat and gawked at those gorgeous rocks! I also tried to figure out which ones were which cut. Then I glanced at the IS pic. You can imagine which one caught my eye and what I was glued to. The center one. So Black and Red. And Excellent, crisp patterns. I just flew to post how BEAUTIFUL they are and I PM'd Dave to ask privately which ones were which cut. I didn't want to look stupid by making the wrong call on the forum. Which I did in the PM to Dave.

Dave explained about the photography, which makes sense. The larger stone being in the center would be the focal point of the lense. The edges would fall off from there resulting in the less crisp images of the outside stones.

Aaahhh. This is gonna be one heavenly ring!

This thing is going to be amazing. I was actually tempted last nite after seeing this to get a 5 stone wedding ring. But it wouldn't really go with the engagement ring thing. Anniversary only 5 years away!!!

I get to pick up the diamonds Tuesday; I can't wait!!!!
dave

Anybody wanna bet he doesn't even wait to get out of the FedEx parking lot before he rips open the boxes????? hehe

Many of our customers have the same problem of not being able to wait....

Hey I might be a novice here at this forum on specs "n" measurements but not when it comes to beauty, and those 5 are beauties.
What a gorgeous piece this will be. Lucky wife and a man with great taste.
Hats off d

Only 6 more hours!
I MAY wait to get out to the car