Hello Everyone! My name is Chris! a Mortgage Banker by trade. About a year ago I had a client that owed me a lot of money, Since I knew her since we where 11 years old I took payment in gold. She lived in Montana! She also gave me these RAW stones she said that her mother mined them 40 YOGO AGO FROM THE YOGO GULCH . NOW KEEP IN MIND SHE ALSO TOLD ME THEY WERE MINED OUT OF A RIVER BEFORE THE MINE WAS DUG OR DURING I DONT REMEMBER. she told me they might be worth a lot of money but she was not sure. One of the raw stones was 14.75 carats . I took them to some one that tested them and they said that indeed they where sapphires! So now the journey starts, I myself live in Pebble Beach and I searched for the best lapaist I could find... I found a very nice gentlemen with the last name of Stone Cutter He was Arminian and Jewish he explaned to me that his family had passed this trade from father to son for 15 generations and back in the old country your occupation was your last name.Pretty cool! He did an AMAZING JOB IN CUTTING THE STONES! Then I sent them out to AGL in New York to get certified. I just got them back and am wondering the value and might be selling for the right offer. One of the stones are 3.05 Carats and the other is 1.25 both cushion cut. I took them to some local jewelers and They told me the size and color and completely untreated made then extremely Rare. I know the real pros are on here please tell me what you think.... Thank you Christopher :0) 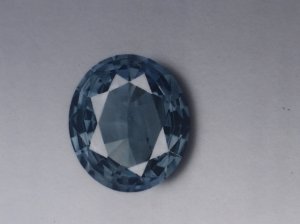 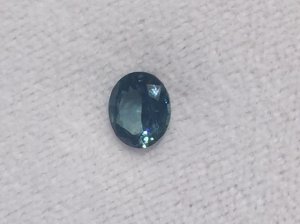 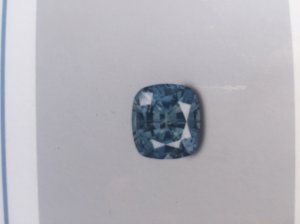 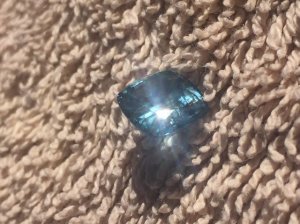 When you signed up for PS you had to agree to some conditions. Among them was that you cannot "sell" on the forums (unless you are posting on the "preloved" forum). So the posts you made on another thread have been reported, just FYI.

As for the stones: do you want to use them to make jewelry? Or is the goal to sell them? 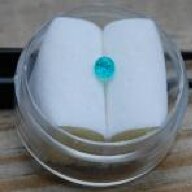 The oval is massively windowed and neither are very saturated and show a lot of grey. But less than ideal color seems to be the name of the game for Montana Sapphire why some folks fawn over it is beyond me.

You can check earth's treasury for comparables, you would need to divide by about 2 or 3 for a realistic sum you could expect to get. I can't imagine anyone paying their prices on some of those stones. $1k-2K ppc on grey stones is insane. 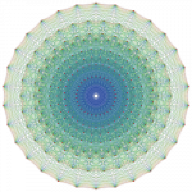 GregS|1473896897|4076645 said:
The oval is massively windowed and neither are very saturated and show a lot of grey. But less than ideal color seems to be the name of the game for Montana Sapphire why some folks fawn over it is beyond me.

You can check earth's treasury for comparables, you would need to divide by about 2 or 3 for a realistic sum you could expect to get. I can't imagine anyone paying their prices on some of those stones. $1k-2K ppc on grey stones is insane.
Click to expand...

It is interesting that you say this. There is a blog post discussing exactly this point, and if you follow the links you can work out how these prices are computed.

Unfortunately, it would be dificult to recoup anything like the same prices as a private seller. You wont be able to offer the same returns policy, and for the buyer you are a complete unknown.
C

Actually either blue or 3.5 is greenish blue According to me AGL certs? I just suck at taking pictures LOL! But thank you for your insights you sound very knowledgeable And I appreciate that . Your statement was true , because in my experience with the stones or the Montana sapphire for that matter . People either hate them or love and half to have them. The truth is they are really beautiful in person
M

I hate to burst your bubble, Chris, but I don't think those are actually Yogo sapphires. Besides being uncommonly large for Yogos, the color is -- as GregS said -- gray, poorly saturated. Download the PDF of this study-article -- The Yogo Sapphire Deposit -- which was published by GIA in 1995:
http://www.gia.edu/gems-gemology/spring-1995-yogo-sapphire-deposit-mychaluk

When you open up the PDF, you'll see how different the color of your stones is from the wondrous color of the Yogos in those photographs... too different, I think, to be chalked up to the camera, novice photography skills, the cut. Granted, Yogos are all not the same (e.g., there are some "purple" ones, and even the blue ones can vary somewhat.

But unless the AGL reports expressly identified those stones as Yogos, you cannot expect to see anywhere to the premium price which true Yogos of this size would command; they will be considered simply Montana sapphires.

You might enjoy reading the Wikipedia article on Yogo sapphires; it is more informative than one might expect:
https://en.wikipedia.org/wiki/Yogo_sapphire

Reposted here because this one has more responses.

I am sorry to say that the lapidary you chose somehow decided not to cut the stones for beauty, but instead chose to try to keep as much weight as possible. The first oval looks to have quite a large window which is dead area where light leaks through so there is at least a 50% surface area where it will not be sparkly, only the edges will be lively. I cannot tell about the cutting of the cushion because you have taken a photograph of it from the side, instead of top down like the oval.

Given the non-trade preferred colouration, I would have gone with the AGL brief, rather than the Prestige Report, which costs a lot more. Colour trumps treatment. Both stones have poor saturation, with the first looking gray blue whilst the second might get a ding in valuation for having a primary hue of green. Unfortunately, both are not rare stones.

ETA
Unless you go for the colour grading prestige report, you will not get AGL's opinion on the colour. What they will list is only the primary and secondary hue. Gray is not a hue, but a result of the lack of saturation and darker tone. With the new cushion picture, I see that the cushion has better cutting, but the poor colouration is going to bring the price down by a lot.
Sometimes the mind ignores what is logical because the person cannot accept the reality of what it is.

I just realized that too. For the OP, photographing the stone with light coming in from the back does not accurately portray the true colour of the stone as it helps brighten it significantly. One wears the stone face up, where the light comes in from the top and the back is covered by a finger/neck/ears.
Sometimes the mind ignores what is logical because the person cannot accept the reality of what it is.
You must log in or register to reply here.
Share:
Facebook Twitter Reddit Pinterest Link
Be a part of the community It's free, join today!
JEWELRY BLOG 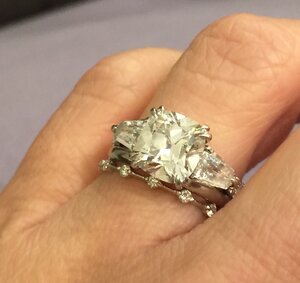