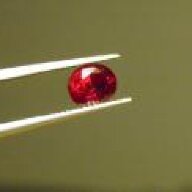 Does any body know the price of this blue stone? 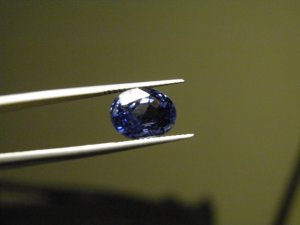 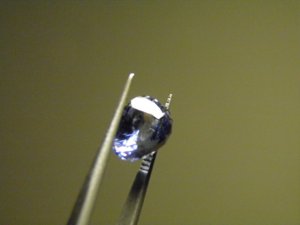 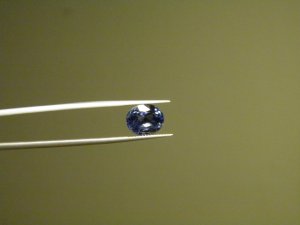 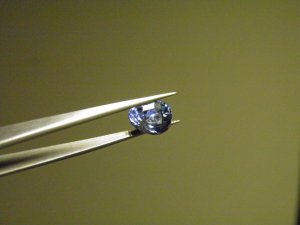 Which vendor is it from?

It may be from Mogok, but origin is only of importance with a very high quality stone. This one doesn't appear to have great colour or cut from these not so great photos and that is what will set the price.

It also appears to be very deep and have a big belly which means you are paying for weight that you can't see. In a stone that size, that weight is going to cost a large proportion of the stone's price.

Do you have any better photos.
Pandora
FGA

I agree with Pandora that the colour isn't fine, and the depth of the stone probably equates to the sapphire facing up smaller than it should.
Sometimes the mind ignores what is logical because the person cannot accept the reality of what it is.

It's important to remember that there are fabulous Mogok sapphires, good Mogok sapphires and really not very good Mogok sapphires. The value is in the colour, cut and size. Unfortunately, in the pictures, the colour is not good and the cut is really poor. It has a huge belly and from the face up photos, a window. For a 5ct stone it also looks very small because of the cut and it's probably been cut to preserve weight.

It also looks like there is a lot of zoning - the end portion of the pavillion is quite a deep blue, the middle part is colourless. This is part of the reason that it has been cut so deep. The colour at the bottom will seem much larger when viewed from face-up. If the stone was cut to good proportions the colour would most likely be very pale.
Pandora
FGA

Many thanks for comments indeed, especially for Pandora II.

This one is light blue, cutting style is old and native.
It came with a retro ring style covering the whole pavilions, inclusion is hardly to see.
Comparing to the other blues, this one is looking suspected, Then I brought to the lab.

I really don't know what is the value of this stone.
What's next?

This sapphire passed from generation to generation.
It came from old Burma mine during 1960-1985.

What is the difference between Ceylon and Burmese sapphire?

Do you guys know how to take good picture of the stones?
What would be the technique of shooting?

I'm the beginner.
Sorry for my poor English.
Siam Blue

This one is light blue, cutting style is old and native.
It came with a retro ring style covering the whole pavilions, inclusion is hardly to see.

By inclusion do you mean the zoning or an actual inclusion? If a stone is eye-clean from table up and the inclusion doesn't compromise the stone's structure in anyway then it shouldn't be an issue. Eye-visible inclusions will impact on the price.

Comparing to the other blues, this one is looking suspected, Then I brought to the lab.

I really don't know what is the value of this stone.
What's next?

The value is what someone is prepared to pay for it. You could send it to an appraiser and ask for a re-sale valuation. I would guess it would be a couple of hundred dollars.

This sapphire passed from generation to generation.
It came from old Burma mine during 1960-1985.

I'm afraid that won't make any difference to the value. If it is a family stone and has sentimental value I would advise keeping it.

What is the difference between Ceylon and Burmese sapphire?

Ceylon sapphire comes from Sri Lanka and Burmese sapphire comes from Burma basically. When you get into the ultra-fine stones then for a stone with all other things equal (colour, carat, clarity, cute etc) then you will pay the most for a blue sapphire of Kashmir origin, the least for one of Madagascan origin. Between the two come Burmese and Sri Lankan with a premium for the Burmese. However these premiums only apply to the very fine stones. Many vendors (especially on eBay) will refer to 'Wow, super-rare Kashmir sapphire' for a stone that would probably only appeal to me if I kept fish and wanted to make their tank look nice.

Burmese origin can also be a sticking point for some people. Even though we can import Burmese rubies in the UK most of the friends who have asked me to help them find e-ring stones have specified no Burmese stones for political reasons. It's a tricky topic and I tend to take Richard Hughes line in thinking that it hurts the small people on the ground far worse than it ever hurts the Junta.
Do you guys know how to take good picture of the stones?

What would be the technique of shooting?

If you do a search for Gem Photography there are a number of threads on here.

I'm the beginner.
Sorry for my poor English.
Click to expand...