My engagement ring has a .6 D VS2 oval brilliant diamond. I've seen several other ovals since I got mine where the cut looks completely different. My stone has no noticeable bow tie in 99% of lighting conditions, and gives off much smaller sparkles than others that I've seen both online and in person. I wondered if it had some kind of non standard facet pattern, so I asked my jeweler about it when I was there for something else. He said it's just a more modern type of cut, the modern tech results in better cut stones, and that the others I've seen must have been old. However, I think he was getting the impression that I was saying I didn't like my stone because it's different. I think it's stunning, and I was just wondering if there was anything unusual about the cut/faceting since I've noticed differences with other ovals.

Anyway, I thought I'd ask the experts here to see what you have to say about ovals in general, and mine in particular. 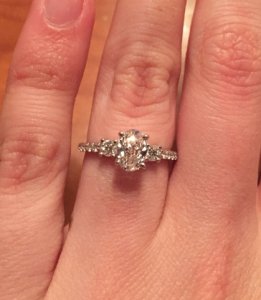 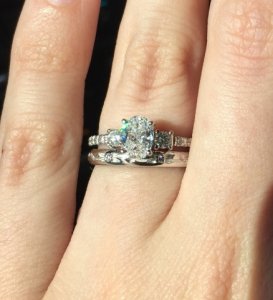 Its probably a modified brilliant facet pattern. Looks great on your hand.
"Experience is inevitable in life; learning from it isn't."

I have to disagree with your jeweler in that you can have poorly, as well as nicely, cut "modern" ovals just as you can have
poorly and nicely cut "traditional" ovals.

You can go on James Allen and look at the GIA reports of different stones and see several different cuts. Gypsy posted a diagram
that had about 12 (or maybe it was 16) different types. It's pretty interesting to see the cut diagram on the GIA report then see what
the stone actually looks like.

Go take a look at your report then look at some of the stones on JA for fun.
~~~Thanks to PS, my wants far exceed my budget!~~~
M

My GIA report is a diamond dossier so other than the measurements and 4Cs it's not all that useful. I wish I had a cut diagram and inclusion plot. (I saw the inclusions when I inspected it with a loupe, but I'd still love to see a plot.)

I'll have a look on JA and see what I can find that looks similar to mine. I know that ovals can vary in the number and arrangement of facets.

Oh, and the jeweler was totally blowing smoke up my ass because he thought I was dissing the stone I bought there.

Under a carat will not have a facet diagram. If you want to know, you can go to a good appraiser.
Where are you located?
"Experience is inevitable in life; learning from it isn't."

[URL='https://www.pricescope.com/community/threads/need-help-evaluating-oval-diamonds.218896/#post-3977421#p3977421']https://www.pricescope.com/community/threads/need-help-evaluating-oval-diamonds.218896/#post-3977421#p3977421[/URL] yours is the OMB oval modified brilliant that Serg and RD are discussing, it sounds like.
"Experience is inevitable in life; learning from it isn't."
M

I searched on James Allen and almost all of the stones that reminded me of my own had the facet pattern I marked below. I can tell that it has that pattern on the ends but it's hard to get a good view of the middle with it in the setting. I live in Pittsburgh, where I'm sure I could find a good appraiser, so if I get curious I may have someone look at it.

I also find it interesting that when I put the stats in the fancy cut grader all of the characteristics are 1A except the depth, which is very shallow. It's very spready. It could probably pass for 3/4 ct instead of .6. It seems like it was possibly cut like that on purpose, since the shallow depth doesn't seem to affect the overall appearance all that much. It still faces up very, very bright when you might expect a stone that shallow to look dark with lots of light leaking through.

As for the inclusions, I saw them easily with a loupe. They're tiny and white, but BAM right under the table facet. It's definitely eye-clean, though. I'm guessing that if those same inclusions were not right in the middle of the stone it would have gotten a higher clarity rating.

I'm kind of glad that I chose my diamond just based on appearance instead of trying to research too much beforehand. From what I read about fancy cuts, you really have to get up close and personal to evaluate them anyway. I looked at stones at a few jewelers that had ovals in stock (a lot did not and would have had to call some in), and mine just blew me away. I knew I had to have it. I thought it was the D color that I was so taken with (I'm very color sensitive) but I'm sure the cut quality had something to do with it as well. 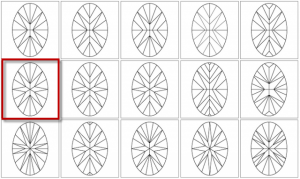 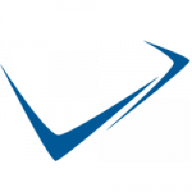 mandaluv1119|1453904831|3982296 said:
I also find it interesting that when I put the stats in the fancy cut grader all of the characteristics are 1A except the depth, which is very shallow. It's very spready. It could probably pass for 3/4 ct instead of .6. It seems like it was possibly cut like that on purpose, since the shallow depth doesn't seem to affect the overall appearance all that much. It still faces up very, very bright when you might expect a stone that shallow to look dark with lots of light leaking through.
*If you hadn't seen the stone, it sounds like you could have very easily rejected your diamond based only on what you would have researched…

I'm kind of glad that I chose my diamond just based on appearance instead of trying to research too much beforehand.
*What a great statement!
While it is very important to be completely informed and have a good understanding of a diamonds characteristics to make a smart purchase decision, I think that, like art, the emotional and aesthetic response to a piece is just as important...even if it doesn't fit in with everyone else's definition of ideal (example - I personally love all the character that can be found in Old Cuts even though they don't 'perform' the best) - but unfortunately this notion of what someone thinks is a beautiful diamond sometimes gets lost in the search when people get caught up trying to filter through all of the information/opinions/personal preferences of others/marketing/etc. …which can quickly suck all of the pleasure out of the whole experience…diamonds are meant to be enjoyed
Click to expand...

This is a great statement! And it is always a bit disheartening to read posts by someone who has invested thousands into a diamond, then later comes to PS to get opinions and leaves disenchanted with their choice.