Is this diamond painted? Is it bad?

Hi PSer's - I need your help desperately! I already purchased this stone, only to learn about the painted girdle topic afterward... The IS image looks like it's been painted, but I'm not sure.

And is that a bad thing for this stone? Are there any other issues you can see with this stone? Even though I already bought it, I could still get it exchanged or upgraded. Thanks so much for your help! 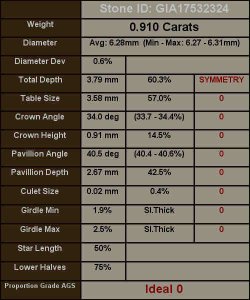 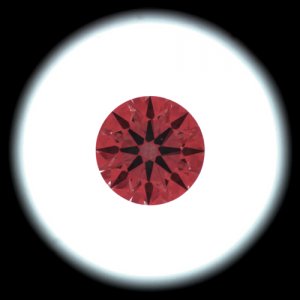 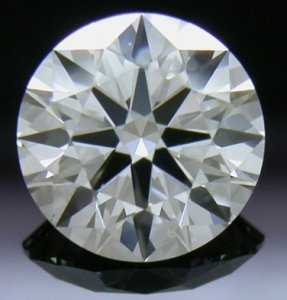 yea its painted a lot.
Have you seen it in person yet?
what is the gia cut grade?
........... Karl has joined the diamond trade and is now posting as Karl_K
J

Hi, yes I have seen it in person. It looks bright in regular lighting and fiery under the sun, but i''m not very familiar with diamonds and have not seen that many in real life so I''m not sure of its relative performance. I don''t have actual images available on this computer.

The GIA cut grade is excellent.

It is the type of stone that shows subtle flashes but probably has a lot of fire. Rather like the eight-star diamond brand.
The painting can not have been too bad because GIA downgrades for it based on the numbers.
A good test is to see how it compares with other nice stones, and if you have good short focus range, see what it looks like from say 8 inches away compared to other stones.
But if you are like me you cant focus much under 10 inches anyway.
Garry Holloway BSc FGAA DipDT
Sparkliologist, Jeweller, HCA and Ideal-Scope Inventor
HollowayDiamonds.com.au Ideal-Scope.com HollowayCutAdviser.com

compare it to other well cut diamonds and if you still love it afterwards your good to go.
I will be honest and say it is a diamond I would not buy.
........... Karl has joined the diamond trade and is now posting as Karl_K
J

thank you both. i will do a real life comparison at a local store.

strmrdr - do you mind telling me your reasons for not buying this diamond? painted girdle and something else?

yea painting
You eyes may like it so check it out.
........... Karl has joined the diamond trade and is now posting as Karl_K

Definitely painted as the gentlemen have noted, it can be a matter of taste as to which type you prefer, but apparently any performance nuances are subtle between a painted versus none to minimal. It wouldn't worry me at all and I would buy the diamond whereas others prefer non painted diamonds which is completely fine. Also as Garry noted, GIA didn't lower the cut grade. If you can compare it with some other well cut diamonds such as Hearts on Fire as a suggestion, then you could see how this diamond compares.
Pricescope Prosumer 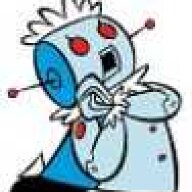 Jen, as Garry notes, this diamond wouldn''t have scored the cut grade of Excellent from GIA if the painting was excessive or detrimental to the stone.

Painting, when properly and minimally done, can actually improve a stone''s appearance. It''s been discussed ad nauseum on Pricescope during the past year or two, but the most important takeaway I can point to is this:

Painting, in and of itself, is not bad. It''s only bad if it has a negative effect on the stone''s appearance, and it typically has to be significantly painted for that to happen.

I can respect that some people don''t happen to prefer the look of painted diamonds, the same way that I happen to dislike Rocky Road ice cream. That doesn''t mean that all Rocky Road ice cream is bad or deficient in quality. It just means it doesn''t appeal to my palate personally. Similarly, there will be those who don''t prefer the look of painted stones, but frankly most people can''t even tell the difference between minimally painted stones and classic Tolk stones.

If you''ve laid eyes on the diamond and you like it, that''s the most important thing.
(formerly known as aljdewey) 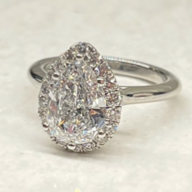 sorry to being off topic - but what does it mean that a diamond has a "painted girdle"?

It wouldn''t bother me!