Is this a good diamond, I''m confused

I thought I did enough diamond research, but apparently not. This is the diamond I''m thinking about purchasing:

The proportions really confuse me because the only way they would add up to the total depth percentage if if the girdle thickness was 6%.
I emailed Fred Cuellar on the diamond and he said it was an off make because the depth was more than 61%, but AGS considers anything under 63% ideal...what gives???

I was also concerned about the H color. I didn''t really notice any color until the jeweler put it next to an E stone. I want a platinum setting, will it work?

Also is it bad that the polish and symmetry are only good? I''ve heard that you can''t tell the differences between good and excellent with the naked eye.

I would appreciate any help. Thanks so much

Actually, that would be about right. The workup on this stone indicates it probably is about a 4.2% thickness at the thickest part of it's "valleys", which is where the girdle measurement is taken. You'd add approximately another 1.7% to arrive at the thickest portion of it's "peaks", hence arriving at or about your 6% figure.

AGA also lists 58.7 to 62.3% as being in the 1A (ideal) range for total depth. What gives is that Fred is confused, and tends to confuse others.

An excellent price for this stone.

The cut is respectable, commanding an AGA 2B Cut Class grade, which is described as an "international fine trade cut", and which I would describe in laymen's terms as a "good to very good" make. Not Ideal, but then again not fair, or poor.

The light return performance is actually pretty good. The DiamCalc software indicates it as possibly being in the following ranges:

Designated "near colorless", H color was for many years called "commercial white" by dealers and was considered the start, or cornerstone of the investment grade market of old, when combined with VS2 clarity or better. It's a nice color, which will work well in platinum.

Although connoiseurs prefer "very good" or "excellent" on the polish and symmetry, the truth is that with the naked eye 99.7% of viewers would never spot the difference.

If you like it, I see no reason not to buy it. If you buy with the stipulation that it appraises out to your satisfaction by an independent appraiser, you can't lose.


I've also attached a DiamCalc computer simulated IdealScope image which gives you a visual picture of the light return performance of this diamond. The 33.2' crown angle combined with the 40.7' pavilion angle makes for a very respectable performance.

Disclaimer- The facet arrangement and symmetry of the image will probably vary from your actual diamond, which may affect the light performance indicated. The computer generates an image with “perfect” symmetry, which is rare. Also, the star/lower girdle facet lengths may be different from your diamond. The computer simulation is reproduced best when the actual diamond is being viewed and the image "tweaked" to the appearance of the diamond, or Sarin info is downloaded directly into the program. However, this "blind" reproduction should be helpful in considering the major light performance aspects..
----------- 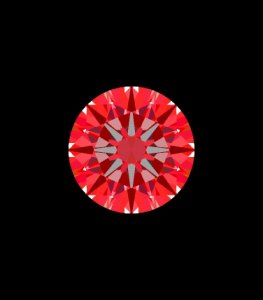 Thank you so much for the in-depth reply.