Is it possible to mount in this orientation on a Vatche RC?

I took the photo kayla posted of her ring on a Vatche RC.

I prefer to have the diamond mounted in such a manner. Is it possible?

I prefer the 4 prominent edges to line up with the 4 side prongs. 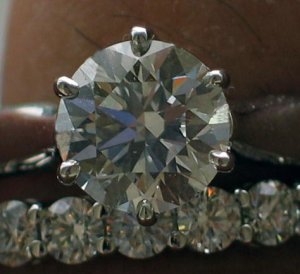 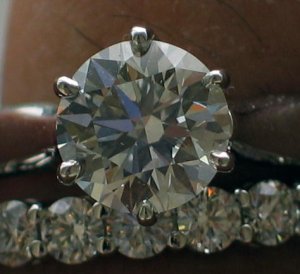 I would think this is possible - if you look at Kayla's picture it's like that, only different prongs are accentuating the side instead of the four side prongs.

I would imagine it's just a matter of how the diamond is placed, and should be an easy thing to accomplish.
~~~Life is a dance, paint the floor~~~

it's funny that you posted this, because that's exactly how I wanted it set. I even called up WF and told them and they set up an apppointment with me to get it set right and to have the prongs checked.
I never went to get it done though, because I was afraid that the prongs would get messed up if they were opened up and closed again. I was afraid that it might weaken the ring or that marks would show up on the prongs.
Plus, if they set it that way, the laser inscription would be hidden.
I still plan on going to Vatche eventually, at least to have the prongs checked.
I suggest that you tell the vendor you are buying from that you specifically want the diamond set that way, right away, before they get a chance to set it. Ask them to position it in such a way, where you will be able to see the laser inscription also.
It's funny that you noticed that, when I first got it, it really bothered me, but now I don't care!
Good luck with your purchase!!

You aren't wealthy until you have something money can't buy...