I was about to go for a diamond for my wife on mother''s day, but I read the many feedback about the IGI reports, I paused abot and now need your urgent opinion if this is worth the money:

is this a fair price for it or is it that IGI is not worth it?
I looked at the GIA charts, the diamond falls mainly on the 1A and only 1 in the 1B scale.
is HRD antwerp a safer cert?

The better stones here in the USA are graded by GIA or AGS. That says a lot to me.

If you are really serious about this stone, get an independent opinion about the color and clarity, and decide from there if the price (which seems good on its surface) is right.

Lots o' fish in the sea!

From the data you posted, it looks like an IGI Antwerp. I like their work and I use them often because of their low prices, good grading and fast turn-around. For those of you who think IGI Antwerp = IGI NY... Well, no way! Luckily they are faaaaaaaaaaaaaaaar stricter!

Hi,
It is indeed IGI in Antwerp. I applied the proportions to HC advisor and it gave this:

Now the concern is:
1. Are IGI tolerant in terms of measurement(like giving % not angles)or evaluation of color and clarity? If measurement is definite, then the HCA is giving satisfactory answers (opinions please?).

2. Opinions from the experts about the dimensions assuming the 3 other Cs are true

SHALL i GO FOR THIS PEOPLE!? hesitation is my middle name

Thanks for the response. The cert number F3C35802, but if you'r wondering about the date it is written on the cert copy:
Antwerp, Jan 16 2003

what do u think?

The measurements are: 6.2 x 6.21 x 3.9 mm if it is of any help on the measruements) could it be used to get back the % accurately or are they rounded to nearest decimal too

Hi Ziad. With a 15.5% crown height and a 58% table, this stone should have an average crown angle of approximately 36.4 degrees, which is a "2B" characteristic. Since it's the only "2B" characteristic, and since it falls within 2 degrees of the "2A" grade, then the stone would rank "2A" on the AGA Cut Class scale.

"2A" is traditionally considered a "fine" or "very good" make. That said, the 36.4 degree crown angle combined with an approximate average pavilion angle of 41 degrees creates an area of light leakage just inside the table. That's what's driving the HCA scores down on the stone.

A possible image is recreated with the DiamCalc software showing the following light return analysis:

A simulated IdealScope image follows. The leakage is shown in the white area just inside the table. Stones like this tend to be a little weak around the edge as well.
In the photoreal image following, the leakage area shows as being darker.

That said, this stone probably looks better than 85% of the stones out there. The price is also excellent as well. Almost too good, to be truthful. It's priced more in line with an "I" color, so I would be sure and have it checked out by an independent appraiser to know what you've really got. Even if it's an "I", the price is great.

Disclaimer- The facet arrangement and symmetry of the image will probably vary from your actual diamond, which may affect the light performance indicated. The computer generates an image with “perfect” symmetry, which is rare. Also, the star/lower girdle facet lengths may be different from your diamond. The computer simulation is reproduced best when the actual diamond is being viewed and the image "tweaked" to the appearance of the diamond, or Sarin info is downloaded directly into the program. However, this "blind" reproduction should be helpful in considering the major light performance aspects..
----------- 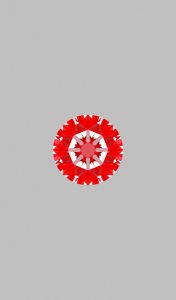 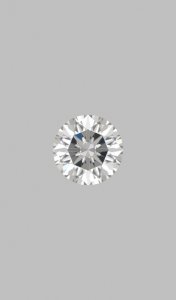 This forum rocks. Thanks for the time, energy and sincerety of the posts.

I assumed you just add the table+crown+girdle and you get 61%! I am novice in this so what would make the total depth be 62.9%

After this evaluation by diacalc, would you go for it for $3270, and does it obey the genral public taste of fire and scintilation. I have to buy or decline by tomorrow so I'm zooming in on a decision.

The peak measurement is usually 1.7% more (in this case 1.9%), giving you the correct total.

The price is excellent, no problem there (if it's correctly graded).

"Does it obey the general public taste of fire and scintillation?". Probably. Have you seen the stone? Does it look good to you?

If it looks good to you, it's probably going to look good to most people.

Let me ask you this though...

Does it give you pause now that you've seen the less than optimal cut performance demonstrated on both the HCA and DiamCalc?

There's an old maxim I've followed all my life that has never let me down. "When in doubt, do nothing."

What's the rush? Mother's Day is 7 weeks away, and you are now becoming armed with knowledge. Next thing you know, you're going to be deadly. Instead of settling for a diamond which will make the "general population" happy, you will have the ability to hone in on one which would make even the pickiest of connoiseur's suck his breath in. Wouldn't that be a good feeling?

Give some of these guys on the forum a shot. You won't believe the stones they're selling. Take a good look at that diamond again tomorrow, and then have one of these cut geeks on here cherry pick a stone for you. See for yourself what all the fuss is about.
Rich, non-Independent GG Appraiser
Sarasota Gemological Laboratory

Here's a DiamCalc simulated IdealScope image and photoreal image of an AGS 0, or AGA 1A cut diamond with a 34.3' average crown angle and 40.55' average pavilion angle. 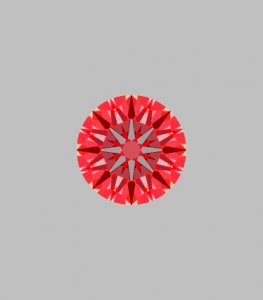 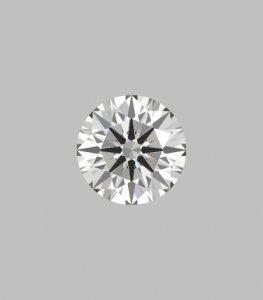 I wonder if I'm learning by the kilos or tons here! Thanks a llllot!

I did not see the stone yet! No surprise, I got a copy of the certificate which fell in the specs and prop ranges I was asking for. Tomorrow I will take a look at it, if I like I would buy. That WAS the plan.

Now? After the HCA and Diacalc,I'm in doubt and a bit down so I will ...do nothing...I guess.

As for picking a stone for me from the forum. This is new to me! How and where? You know roughly what I want( from specs of this stone) so shall I say it now..............HEEEEEEEEEELP.

It's a piece of cake.

Vendor's, there is a consumer here asking for one of those "cherry" stones that you love so much to buy and sell.

Why don't you send him some PM's of your favorites in his price range? Looks like he wants to stay under 4 grand.

Consumer's, if you've had a good experience purchasing from some of these cut geek vendors, let Ziad know. He would like expansion of his comfort zone regarding an internet purchase.

Ziad, bear in mind that many of these vendors operate on GIA and AGS cert stones, which carry a lot more weight than the IGI cert you were looking at. In other words, you'll really get what is being represented, at a price which is correct, instead of a stone which seems like a "steal", and then just turns out to be overgraded.
Rich, non-Independent GG Appraiser
Sarasota Gemological Laboratory
J

Per Rich's request: I purchased my stone from Jonathon at GoodOldGold.com - A great experience!

I am going to being writing a review in the next couple of days. I "saved" myself approx. $4,000 over the best stone I could find locally which was a branded Hearts on Fire (HOF) stone 10 pts smaller than what I bought from Jonathon.

I couldn't be happier with the stone, the ease of purchase and the information/time that he was willing to spend 'educating' me about stones in general with no pressure to purchase.

It would be helpful for all of the vendors if you could post your general specifications of what your looking for and a budget so that they can email you with what they have available.

Would you like to stay just under the carat price point? Are you looking for a H&A ideal cut or a very good cut but not necessarily an ideal? Specific color and clarity or best for budget?

If you can answer these questions the vendors here will be to respond with diamonds that fit within your budget and specifications and not send you info on stones that are out of price, not right color etc.

! What a great way to thank a woman for being your wife and mother to your children!

Hi Ziad,
I am about to post a thread entitled, "Happy SuperbCert buyer" describing my experiences with Barry and SuperbCert. Take a look--I hope it's helpful.

I strongly suggest that you at least check out superbcert.com. You have an excellent chance of finding something gorgeous there and making your wife very very happy with it!

In response to what Rich said go back to the pricescope page that has Select by cut quality and dial in:
.90 - .99 ct
H - I color
VS2 clarity
GIA or AGS cert
and you come up with one diamond

i have a certificate from igi dated december 4 , 2001
is it ok or what?
appricate your opinion
NORA