I got the ring!! Wooohoooo! Thumbs up GOG!

Wow it is AMAZING!!! I''ll post pictures tonight! Many thanks to Jonathan and Christen at GoodOldGold.com. They have be awesome to work with! They are the greatest! Things could not have gone smoother. Their customer service is top notch as is their stones AND their prices!

Thanks also goes to Mara, PQ, Giangi, homer, fire&ice, aljdewey, and everyone else on the forums that helped me out!

This is a great place to get educated about buying the best diamonds, without it I would''ve made a really poor purchase.

nice, can't wait to see it

And how the heck did ya get those little faces jumping?? You're too clever!

NATE - where are our pics you promised???

Sorry sorry... spent a bunch of time trying to make a movie, didn't turn out too good. Ah well... heres the pics I promised! I tried to make them sizes most people could handle... I have them all the way up to a resolution of 2448 by 1632! Also check out this thread for pics and movies of these stones loose.

Showing off the setting...

Arrows on one of the side stones...

Arrows on the center stone... arrows are so hard to get a picture of!

Nate.....VERY, VERY well done. Any girl would be delighted with this ring...you are a class act.

Congratulations, and let us know how the proposal goes.

Nate, that is a splendid looking ring. Best wishes!

WOW Nate that ring is an amazing fireball!! The pictures are great as well--nice talent with a shutter. Do you have any pics of the ring that are not so close-up so that we can see the finished product more 'regular size'. I'd be interested to see how the stones sparkle from a regular viewing standpoint. The close-ups are wonderful though, and the stones look spectacular in that setting. Congrats and a big thumbs up!!! When is the big proposal (hasn't happened yet right?!)

I'm addicted to the forum, I'm sure I'll stick around!

I'll get some pics regular size, just for you Mara.

All those pics were at 19x.

Definitely will post the proposal story, although it isn't a surprise. We met while she was visiting on a tourist visa, she went back to Peru where she is a citizen and has been going to school. We've gone through the fiancee visa process and are currently waiting on the INS or the US government or someone to verify she isn't a terrorist and then they will grant her the visa so she can come here and we can marry. We were told (last week) that will take one to three months. She has been back for 13 months and I haven't been able to hug or kiss her since I visited Peru 9 months ago.

She knows I bought the ring but I haven't shown her any pictures. I want there to be atleast some sort of surprise! Her only criteria was she wanted a 3 stone ring (she fell for the past-present-future commercial apparently...) and she wanted a squarish band. In the beginning I told her we should go for a solitaire so we could get a bigger stone. Back then my budget was $3000! Who knew I'd spend $8600?

Anyway, so I tell her now I couldn't get exactly what she wanted but that she'd better like it.

And anytime I refer to it I use the word "diamond" (singular), implying that I got her a solitaire.

Of course by saying I didn't get exactly what she wanted I was referring to the squarish band! Just trying to keep her guessing, though I feel kinda bad cause she has to wait one to three months.

As for the actual proposal... I'm not sure how I should go about it... theres the place we first kissed, at a bench in a park near the sea. But its not all that nice and seems there should be a better place... I'd like it to be really nice and a place we can always come back to. Theres no way to really surprise her cause she really wants to see the ring. She's been trying to convince me to give it to her at the airport when she comes!

So I'm sure she'll be on the lookout whenever I take her somewhere until she gets it.

I could blind fold her and drive her all around, then take her somewhere... thats a pretty good idea I think... but where? Something like the edge of a cliff overlooking a city would be nice... anyone know of any good cliffs?

Plus then if she says "no" I could push her off!

P.S. Please stick around with us! Let your girl join too! 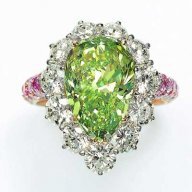 ... but where? Something like the edge of a cliff overlooking a city would be nice... anyone know of any good cliffs?

Plus then if she says "no" I could push her off!

Nate, I don't know where you are located, but doing something like a weekend at a B&B or something would be great...or even a romantic dinner at a restaurant. Both are places you can visit again for anniversaries, and places love to have proposals happen at them so they are likely to try to accomodate you should you have any odd requests !

I am a sucker for a weekend away somewhere, that's why I mention that. Plus you can do fun things like rose petals on the bed by the staff while you walk the grounds and pop the Q, and a special table for two in the corner of a restaurant to celebrate afterwards.

We are near SF and so we have tons of places around us to do something like that, Mendocino springs to mind as we love a little 2-3 hour drive to get us in the vacation weekend mood. We also do Carmel, Napa etc...all of which are much fun! Anyway...my two cents!

Even if you do the park bench where you first kissed, do something else, like a dinner or a picnic there at the place, something else to commemorate. Also do not make her wait too long, the poor thing is probably in torture already waiting. I was dying and I only had to wait 6 weeks knowing my ring was being created. At that point, once I knew he had it, it was all about 'when'. It wasn't a surprise for me, so I think it's great you are keeping the finished product from her, as I had a hand in creation so I knew EVERYTHING. 20/20 hindsight, I would have liked to be a little surprised but it just wasn't in the cards! Control freak? Me? Nah!

A simple private proposal is my cup of tea. I like the first kiss location idea. Perhaps afterwards, a location where she can show that baby off to her friends. Make sure cell phone batteries are charged so phone calls to friends & family can be made!

that is simply gorgeous! congrats!

of course you know i still can't get over that kegerator you have in your home...but the diamond is nice too.

Ahhhhhhhh, that was worth the wait.

Mara, whats a B&B? Yeah I don't want to make her wait too long. I think the blindfold is the best so far... I just need somewhere really cool to take her. And also something to do afterwards. Sigh...

I've tried to get some pics of the ring normal size... a couple turned out alright but not as good as I'd like. I'll try again next time the suns out and I'm home.

Bed and Breakfast! Or like a romantic inn or something.

Mara, here is where we are different. I HATE B&B's. They are way too sedate for me. Also, I find them to be very intrusive. Inns can be O.K. as they seem more "hotelish". We stayed at an Inn near Mendocino that wasn't bad - Steven's Inn (if I recall correctly) The food was excellent! They had a great dinner menu; and, everyone had a private table.

In B&B's I feel like I am a guest at someone's house I don't know. Plus, sometimes you get another guest that all they want to do is chat. This one *incredibably* boring guy even had a slide rule in his pocket as he gave long details on what he did. I was just being kind. I didn't want to know his life history. Believe me, it wasn't interestsing. We couldn't get away from him. When we excused ourselves, he even wanted to know where we were going as maybe he would go there to! ACCCCCCKKKKKKKKK.

Sorry to hijack the thread; but, some people hate B&B's. I'm not alone in that sentiment.

My apologies for not responding to this thread sooner. Nate you ARE truly a class act and your ring kicks optical arse.

You should have seen my staff drooling over it before it left! You've been a great pleasure to work with and I am honored to have made not just a client but a good friend of you too.