I am considering getting an asscher-cut diamond and would appreciate the expert's opinion.

The price is $18000. Is it a good deal? I keep thinking that something must be wrong with this stone. Could it be too deep?

Also, is there a general rules for asscher-cut diamonds in terms of cut grade?

Thank you so much in advance. You guys are the best.

Old cut Asscher cuts are always quite deep. The table on this one seems a bit big, but maybe it is okay. The price does not seem too high. Post a photo and we can know if it is potentially a real Asscher cut or just another deep emerald cut.
David S. Atlas, GG(GIA)
Certified Sr Mbr(NAJA)

Thanks so much for the reply. I will see if I can get a picture of the stone and post it on the site.
V

Dave, here's the picture of the stone. Hopefully it helps. Any comments to help me decide on the purchase is strongly appreciated. Thanks so much! 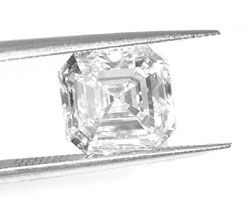 It does at least look like a real Asscher cut type. The table should be rather small and I can't see that element clearly, but the corners and outline look very good.
David S. Atlas, GG(GIA)
Certified Sr Mbr(NAJA)
Ideal-Scopes-ASET Scopes-Diamond tools
V

Based on its price and cut quality, do you think it would make a good purchase? At this point, I am quite comfortable with its color and clarity. Thank you so very much again!

In my case, it cames to cost and the only Royal Asscher I could afford was about the size of a peice of rice, so I scrapped that idea and went with a traditional emerald. 1.6ct E color, VVs2

I didn't know about Royal Asscher and Generic Asscher before, but now I do. Thank you for the wisdom.

The price you are being asked is certainly not high. Is the grading you are giving from the GIA or some other lab?
David S. Atlas, GG(GIA)
Certified Sr Mbr(NAJA)
Ideal-Scopes-ASET Scopes-Diamond tools
V

The grading is from GIA. I am attaching the cert here for your review. If you think this stone worths the money, I will go ahead and get it.

All the best and much thanks,
virtue

I think the money is fine. I also think is is only Asscherish, not a true old Asscher cut. The closed culet and the largish table for an Asscher are a pretty good clue that it is a pretender to the Asscher heritage of cut style.

If you like it, then it is okay for the money, but I have a distinct feeling about the non-Asscher components I mentioned being pretty good clues..
David S. Atlas, GG(GIA)
Certified Sr Mbr(NAJA)
Ideal-Scopes-ASET Scopes-Diamond tools
V

Thanks Dave! As always, your two cents worths a million.

Hi, this stone looks great...where did you find this?