Hail me a CAB

I have a vague memory growing up ...mid-80s/Preppy Handbook Era maybe ... of a period in time that Cabochon cuts were all the rage and that faceted gemstones were, um, less fashionable .. maybe even considered OverTheTop.

Now, I was in a tiny private school in the South - so I can''t claim my finger was on the pulse!!

I was just curious how accurate this vague vague memory was -- and how accurate that trend/perception was in the world outside my teensy snobby bubble AT THAT TIME.

I think it really colored (ha) my perceptions about faceted gemstones for many, many, many years -- probably until recently. And I''ll admit - I probably STILL favor the placid, clean, gumdrop beauty of CABS ... seemingly coming BACK in style, with Tiff''s Sugarloaf line etc.

i am personally very fond of cabachons. i have seen some beautiful ones over the years but can''t identify with the 80''s period of popularity you remember. it could very well have been i just have no knowledge of it. i do know connie chung used to wear a beautiful green cabachon ring and i have not seen her wear it for years. i notice if i catch her on tv since i liked it so well. i don''t remember which site i was looking at but in the last two years i saw a couple of beautiful colored cabs.

I love the title of this thread..

I''m a huge cab fan...especially sugarloafs (sugarloaves?). I don''t remember them ever being ''all the rage''. Being so much less glittery, I think they''re an acquired taste.

When I needed a break from drooling over old yellow asschers, I amused myself drooling over this bracelet, which features sugarloaf cab emeralds.

I love them too.
I always find myself checking this one anytime someone posts a link to cherry picked since it's on the front page of the gems section.
http://www.cherrypicked.com/Gallery/Score.aspx?ItemID=1754

Since you love emerald you'll no doubt like this gorgeous cab from Mya Nassi. It's a mere 15.59 carats and I've misplaced the price but it's a LOT! 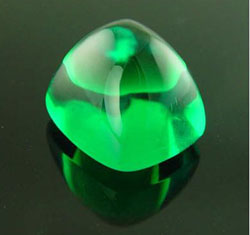 Thanks for posting that! (I''m surprised they cut that into a cabochon. If it were faceted, wouldn''t it be even more costly??)

Thanks for posting that! (I''m surprised they cut that into a cabochon. If it were faceted, wouldn''t it be even more costly??)

It certainly would all things being equal. I don''t know the story behind it and why it wasn''t faceted. I only know it amazed and delighted me when I saw the image. The seller had some awesome ruby cabs too. If I can find them again I''ll post images.

Here''s a nice ruby cabochon ring (18.80 ct.) from the same dealer set in platinum with diamonds. The ruby is certed by Gubelein. Nice little bauble but I don''t know the price. 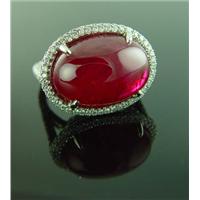