How concerned should you be about a medium sized feather that reaches the girdle? I have heard all of the talk about the possibility of breakage, but I wanted to know how frequently that possibility actually happens. Also, does it help or hurt to cover the feather with a prong? Thanks. 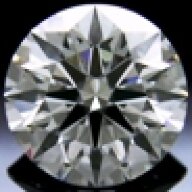 I would be concerned because a feather is considered to be an internal crack. And I would think that any direct pressure on the feather by a prong could cause more cracking.

Opinions vary on this, the feathers you describe aren't necessarily a problem and in some cases can be covered with a prong - it depends on the type and size of the feather etc, but it is best to get an expert to advise you who can actually see the diamond. What clarity is this diamond?
Pricescope Prosumer

The diamond is an SI2

I would get an expert to check it out, it might be perfectly fine, but we can only guess as we haven''t seen the diamond. Not all feathers are created equal. Let us know how you get on!
Pricescope Prosumer
H

Generally speaking a feather open to the girdle on an already cut stone usually doesn''t pose any potential problem during NORMAL wear. One should avoid drastic temperature changes (read red hot to icy cold, not normally attained by the retail consumer, but certainly by the tradesman who cuts the stone or sizes the ring) and if the flaw is covered by a prong, you would want to avoid a drop or bump directly on it.

As a rule, once the stone goes through the riggors of the cutting process (bruting, the heat of cutting and oil getting into the flaw and finally boiling in strong acid) it''s pretty much been tested and normal wear won''t cause it to get any worse.

Old terminology for this..."Gletz" or "Knifey"

I have also read here on PS that some feathers are ''healed'', or the diamond continued to form around/beyond the crack millions of years ago.

How would you know if this is a ''healed'' feather?
Maybe an appraiser can tell you.

What does an appraiser look for In General when examining if a feather is ''healed''?

There are lots of threads where pros mention "healed" feathers.
Above is one of them.

Do a search.
P