Did I get scammed?

Hello! I'm new but I'm also just really confused and I’d like to know what some people here think. When I was very very new to jewelry I bought a Kataoka necklace from Ylang23 and they listed it as 0.58 total carat weight—I have a screenshot as proof. Recently I realized this was not the case. It is only 0.23 carats. I was really new to jewelry and had no idea what that difference looked like.

I only bought it because they listed it as 0.58 tcw. At the time, their price for this necklace was higher than other places. But I bought from them because they said it was 0.58 carats, so I figured it was worth the higher price.

I contacted them about it recently and first they completely denied making a mistake. Then after I pressed them, they agreed that they had made a mistake and listed it as 0.58 tcw when it was really 0.23.

They also said they could do nothing about this and they pointed me to a part of their website saying they are not responsible for any incorrect information. So I guess they could lie about anything on their site and get away with it? I bought the necklace two years ago which I know is a long time—but I only bought it because of their mistake and misrepresentation, so I’m very upset about this.

I feel like Ylang23 tricked me, scammed me, overcharged me, and then refused to take responsibility when I found out. What do you think?

I don't now that vendor or that type of stone or necklace (?).

How much time has elapsed between purchase and your realization? How did you arrive at 0.23 cts?

These details may help others weigh in.
K

Do you have a receipt confirming diamond weight from the actual purchase? Have you any proof in writing that the weight is different that you can send them possibly with a letter of demand drafted by a lawyer?

I think after 2 years it would be hard to get any retailer to take responsibility for that but Kataoka is **extremely** expensive. If the price was consistent with what they charge for a .23ct necklace, I would put your mind at rest that they just made a typo. And if the prices at Kataoka have gone up in the meanwhile, maybe you can resell it for close to what you paid if it doesn't make you happy to wear it anymore.
C

I do have proof--I have a screenshot they sent me in 2018 saying that the necklace is 0.58 tcw. In an email, Ylang23 recently confirmed to me that it's actually 0.23 carats but basically told me too bad, because in their Terms of Use they claim no responsibility for any "mistakes" they make on their website.

One of the reasons why I'm angry is because the price of the necklace has actually gone DOWN since I purchased two years ago. They gave me some excuses like saying that back then, the price included taxes and duties for shipping from Japan. But other retailers were selling it for less.

I thought it was more expensive than what other retailers were charging at the time because it was 0.58 tcw, not because they were passing their extra costs to me.

I am wondering whether it's worth pursuing legal action.
L

Chanterelle said:
I am wondering whether it's worth pursuing legal action.
Click to expand...

And why are there two accounts on this thread writing as if this is their necklace?

I agree with poster above that 2 - 3 years is way too long to come to the conclusion that it is too small.

And how do they know that the item you are grieving now is the item they sold to you and not something (different) that you found on eBay?

Maybe ask them for an upgrade option or store credit for the difference; at their sky-high mark-up they could give you that for pennies on the dollar. Their merch is pretty.
C

Well Ylang23 (the store I bought from) agreed that they had made a mistake in the listing--something about there being two numbers and they wrote down the wrong one. But then they basically told me, we made a mistake but too bad for you.

Also to be clear, it's not Kataoka that made the mistake. It's Ylang23.

Crystallinum said:
Well Ylang23 (the store I bought from) agreed that they had made a mistake in the listing--something about there being two numbers and they wrote down the wrong one. But then they basically told me, we made a mistake but too bad for you.

Also to be clear, it's not Kataoka that made the mistake. It's Ylang23.
Click to expand...

your original question was whether you were scammed. if they charged you the correct price for the item at the time then, no, you weren't scammed.

if they charged you whatever a .58 Kataoka necklace would have cost but gave you the smaller one instead, they made a big mistake - no one here can tell you if it was carelessness or a scam - but it may be hard to get anything done about it after two years.

i'm no lawyer but keep a paper/email trail of everything if you decide to look into your legal options. the timeframe to address this may have run out. 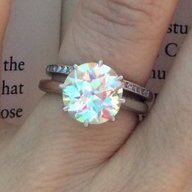 This is Ylang23 in Texas, right? What is the price difference of what you paid vs 0.23 necklace?
What would your ideal outcome be? Think about what you would be happy with and would be realistic. As someone suggested above, perhaps a store credit as they are more likely to do that after 2 years. Of course, if you never want to shop there again then negotiating a store credit is meaningless.
Did you pay by CC? Some offer extended buyer protection so that might be an option. 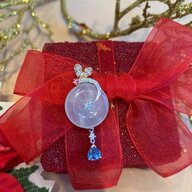 If you are living in the US and this was less than 2 years ago, you could have taken this to small claims court. You can represent yourself and do not need a lawyer. However, as the others have advised, too much time has passed for this.

This is a guide, in which it states the statute for limitations for most cases is 2 years, and preferably you should sue within 6 months to a year so it doesn’t run out while waiting.

How to Sue in Justice Court (Small Claims Court)

This article provides information on justice court basics. This is an overview of a brochure written by the Texas Young Lawyers Association.

My guess is Ylang23 knows you have no recourse now and thus doesn’t need to do anything. You could try to negotiate for credit as suggested, or you can take the scorched earth approach: write negative reviews (not angry, be very factual) on Yelp and Facebook and see if they try to address it.
M

Here is a theory: Kataoka offers 2 versions of this necklace. One version has a rose cut center diamond (actually 2 rose cuts back to back) of about .16ct and the other version has a round brilliant center diamond of about .40ct. Since rose cuts face up larger, both necklaces are about the same visual size, but the round brilliant one costs substantially more ($3780 vs $2480) due to the higher carat weight. It’s possible that the store mistakenly listed the rose cut version with the details of the round brilliant version.

Thank you all very much for your input.

I am still very upset with Ylang23 about this.