Please clarify something for me. If you were to see a dark center in a diamond that is tilted about 45 degrees, is this because it is a poorly cut diamond? Is it the light leakage under the table? Face on, the diamond is white.

I have seen this in diamonds I have examined. Even when I am tilting the diamond and looking in a mirror, I see the round dark center.

I see the same effect in my diamonds too. I wonder why?????

What are the proportions of your diamonds?
G

What about this explanation? If I remember right, the critical angle of diamond is around 43 degrees. As you look straight down into the table, you see light streaming out of the diamond as it reflects off the pavilion facets. As you look at the table at an ever increasing angle, evidentually you'll hit the critical angle. Any rays attempting to exit the table at that angle are reflected back in. Now you'll have to look at the crown facets to see light since their angle with respect to your eye is still under the critical angle. Makes sense to me anyway.
G

Oops, the book says the critical angle for diamond-air interface is 24.4 degrees. Well, maybe my explanation is correct in principle. I can't believe there exists a cut which emits brilliance at any angle from face-up to sideways! Cut-nut, Leonid, where are you? 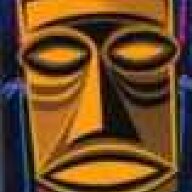 Sparks, I did a search for the word dark in topic and pmd1117 was the topic starter on 10-11-2001 where Garry sheds some light on the subject,(no pun intended). Garry where are you?
S

Thanks tonysgeko-I'll look up the posts in a minute.

The diamond with the round dark center was considered a "deep stone". I know the depth was high and the crown angle was more than 35 degrees.

The dark center was perfectly round, directly under the table.

The light can leak out the region in the opposite side table as in this ray path from the direction you would be looking in (there is a reflection also).

The critical angle of diamond is very low (23.5 degrees) and it is not quite as simple as it seems - note the multiple internal reflections. 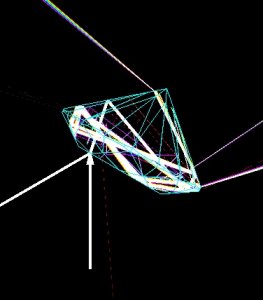 Serg's DiamondCalc must not be configured right. The rays impinging on the pavilon are clearly in excess of the critical angle and should be reflected as in Roc-doc's illustration.

The dark center I am referring to is merely a pinpoint in size.
It changes when I tilt the stone or when I wear lighter clothing.
I thought that this was the reflection of my head or my clothing.
Is this true.

Can anyone post some pics of what a "good" center of a round stone should look like?

Beddazzled you are right the darkness is possibly your head shadow - try holding a bright colored piece of paper and see if the darkness changes color.

Greentree - There is nothing wrong with Sergey's DiamCalc.
My 1st pic was with the stone rotated off the main facets.
Here is a single ray version at 45 degree with all the secondary reflections removed. 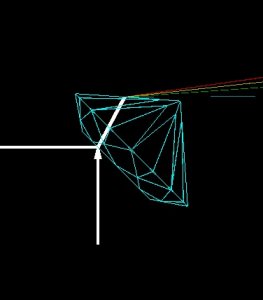 GreenTree,
How do you measure the angle between ray and pavilion? 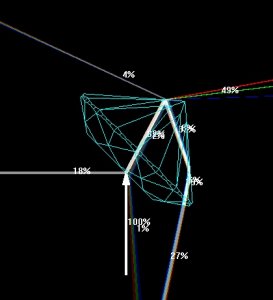 I was out of town this weekend.

I think I'd better buy a copy of DiamondCalc and try this for myself. After a little experimentation I'm sure I'll catch on. Hope it doesn't use too many resources. My home computer is ancient. I'll spend serious money on a diamond, but won't spring for a decent computer. Go figure...