First time posting here, but I was lurking around the site when having my fiancee's engagement ring made a few months back. I hope this is the correct forum to post this question in.

Quick back story. I purchased a diamond from B2C. I wasn't able to find a setting I liked so I brought the diamond to a jeweler to have a custom setting made around it. The jeweler created exactly what I was looking and even added details I didn't think of. Exceptional work. We couldn't be happier with the outcome.

The issue I am now having is more of what I guess would be considered an ethical/moral question on the jewelers part. Being I don't know the business this could also be common practice.

My fiancee hadn't been to the shop so the other day we were in the area and I took her by to go look. We were thinking of having the jeweler make our wedding bands or purchasing his stock pieces.

After a nice visit and look at the rings we head out of the store. There in the window is an exact copy of the setting I had him custom make. Only difference was the shape of the stone. Needless to say I'm not exactly thrilled, but again I don't know the business. I haven't spoken to the jeweler about this yet and wanted to get some outside advice.

Is reproducing a custom piece generally considered bad form or is it common practice in the industry?

Thank you for any advice.

That's normal. Custom does not mean "one of a kind, never to be reproduced." Even if you get a guarantee that your specific jeweler won't copy it, anyone who sees the ring can bring it to another jeweler to have made, even if it is unique enough to have been copyrighted. Also, most rings just really aren't unique enough, even when custom, to be copyrighted. Of course yours might be, but if you didn't arrange with the jeweler to only have him make it once, the design is his intellectual property to do with what he pleases. Usually in order to have the rights to someone else's intellectual property like that you'd have to pay extra, sometimes quite significantly extra - don't know if that's the case in the jewelry industry but it is in all others. 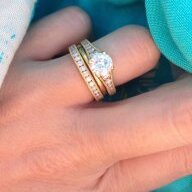 This has been discussed ad nauseum on this site...you will get varying opinions.

IMO, a bit of bad form on the jewellers part but you don't really own the design unless you copyrighted/trademarked it and even then it's debatable. It would have been nice of the jeweller to ask you but from their perspective, they actually created the work in its physical form.

It also begs the question of where you got your design ideas - many (most?) rings are variations of a theme. As you said, the jeweller also added his/her own touches to the ring, things you didn't think of, so is it really your custom design?

In that case I'm sorry to beat a dead horse. I work in an industry where there are a lot of grey zones/varying opinions on issues like this.

The majority of the structural ideas were mine. He even admitted to not thinking of a design like the one I had made. It is nothing earthing shattering or really new in the sense that similar things have been done before. It is a mix of several different vintage rings I couldn't find anything similar to.

It's the fact that it is an exact duplication.

End of the day it doesn't really matter. We are both very happy with the ring and very happy with his work (which is why I have left his name out of it) It is just a bit disheartening when "its a very unique ring, no one will have anything like it" is said to you and few months later they have made an exact duplicate of the ring (every detail), with the exception of the diamond.

Thank you for the info!
C

Ugh. While I understand that there would be valid reasons why this might be ok, I have to admit that it would upset me too. It feels like it has taken something special and unique and cheapened it into something stock and common. Just my opinion.

I do understand your disappointment. I once purchases a very uniquely designed ring from a local jeweler. I had patronized her shop a lot, but for relatively smaller purchases. This was to be my first big jewelry purchase. Anyhow, I'd been scouring her selection for several months, just not finding exactly the right style for me, when she invited me to drop by when one of the designers she bought from was coming by with a new line, to see if I liked any of those styles. The ring I decided on was very unique and modern, and the store's owner said she it was not a design she's be ordering for her shop. The sample was set with a citrine; I had my ring set with a custom-cut amethyst. A year or two later, I was so disappointed when I went to that same shop and saw "MY" ring in the showcase, this time set with a citrine! But I got over it pretty quickly - the chances of my running into the owner of the citrine ring are minuscule, and I now think that might be kind of cool!

As you said, the jeweler you were working with added details of his own creation to the idea you brought him. So unless you reached some other agreement with him before finalizing the purchase, I think he's within his (creative and ethical) rights to re-create the final design. Legally is another matter - as I understand it, he's clearly OK legally.
"If money can fix it, it's not a problem." ~ Tom Magliozzi of "Car Talk"

Oh gosh, I'm dying to see a picture of this ring...but I guess that is out of the question

I would be a bit bummed too but would probably get over it...I might get even in my mind by buying my wedding bands
somewhere else...petty, I know!

( I guess that would be consider NOT getting over it!)

Well - that IS a compliment. That jeweler was REALLY pleased and proud when he finished your ring!! 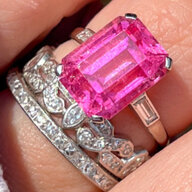 It's that jewelers design he can do with it whatever he wants.

Try to think of it this way. Im sure you designed the ring to be exactly what your betrothed wanted. It was perfectly tailored to her. Regardless of how many reproductions he makes, won't take that away from the design.
you do you

I have to ask how long and involved of a design process did you go through with this jeweler?
Was it made using CADs and then casted or was it hand-forged?

I feel like there are a lot of people who say they "designed" a ring, but really their jeweler found an uncommon stock setting that matched their parameters and then produced it as their new custom designed ring. I am not saying that this is what happened, but I used to work in finance and saw a lot of guys say they "designed" their wives rings when they were pretty basic designs.

I think that here on PS we do see a lot of very unique rings- and many, many, many of them have been duplicated by other jewelers and that pisses people off, but I think that since this was the jeweler who made your ring there is nothing you can do about it.

If you give us an idea what the design was, we could be more informed in our answers....

Some elements of design are not "protectable"
It's possible the jeweler made the ring plenty of times before she/he made it for you.....
David Friedlander
President- Diamonds by Lauren/Rock Diamond Corp- Serving the Pricescope community for over 15 years- located above 47th St NYC
http://diamondsbylauren.com
You must log in or register to reply here.
Share:
Facebook Twitter Reddit Pinterest Share Link
Be a part of the community It's free, join today!
JEWELRY BLOG