Colored gemstone with OM written in it

Have any one seen coloured gemstone precious or semi precious with written OM in it in indian hindi language . Om is the sound of universe and in used in yoga practice ...


In Hinduism, Om (also spelled Aum) is a Hindu sacred sound that is considered the greatest of all mantras. The syllable Om is composed of the three sounds a-u-m (in Sanskrit, the vowels a and u combine to become o) and the symbol's threefold nature is central to its meaning. It represent several important triads:

Thus Om mystically embodies the essence of the entire universe. This meaning is further deepened by the Indian philosophical belief that God first created sound and the universe arose from it. As the most sacred sound, Om is the root of the universe and everything that exists and it continues to hold everything together.


They says these stones are rarest of rare and cannot be found easily.
this is just the example of stone 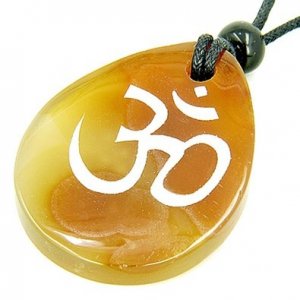