Can anyone help with identifying or know what style this is? 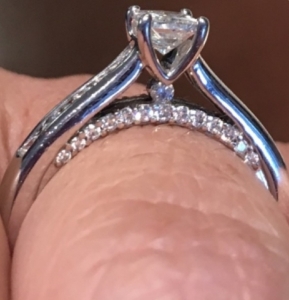 Re: Can anyone help with identifying or know what style this

Is there a specific element of the ring you're interested in? I don't think there's a single "name" that captures the ring.

The shoulders are "cathedral" style based on they way they swoop up to the center stone.

The side stones look like they're set into those cathedral shoulders in channel settings.

The little stone at the base of the center stone would generally be considered a "surprise" stone.

I'm not sure what those pave-set stones on the side of the shank, under the center stone, would be called.

The center stone looks to be a princess cut stone, but you probably already know that!