Can any cushion be re-cut into a branded cut like AV?

Re-cutting a cushion diamond into a branded cut like AV.. How can it be done, what are would the requirements if any and how is the pricing? Thank You!

You would need to call GOG and discuss it as the August Vintage cushions are their branded product. I don't know if they would consider such a task or how much of the diamond's weight would be lost. Give them a call - they'd be more than happy to give you their opinion I'm sure.
S

Depending on the brand and what proportions they are cutting to as there is no fix proportions between different brands.
V

Has Jonathan posted about this previously? I am sorry if it's a repeat, I can't seem to find it.

I don't think Rhino has talked about this before.
One Ring to rule them all. 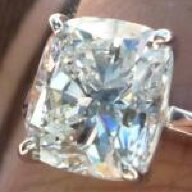 I'm sure there's others out there; however, I've only ever heard of Singlestone and Brian at Brian Gavin Diamonds recutting a stone for a non-dealer/retailer. You only have one diamond (presumably). Only a cutter looking at it in person can tell you whether it's a suitable candidate for a recut. The inclusions, the depth or the shape of your stone may make a recut impossible, risky or result in too much weight loss for your taste.

As for whether someone will cut a branded stone for you - I suppose you'll have to talk to the holder of the brand. I suppose you can try to have someone mimick it. I don't know what type of legal protection these companies, including GOG has over the design/cut, but I would assume there are some in place and you don't want to infringe on that. However, I don't think any reputable cutter is going to mimick a branded stone completely.

If you're interested in an AVC but would like to recut your stone, I'd talk to Jon at GOG. Jon has a cutter who does AVC's for him. Although frankly, I don't think Jon will allow you to use his cutter and patented design, but who knows? It's Jon's call. You should phone GOG and speak to him directly.
V

Yes, I will call him. I would be interested in the original, branded, patented cut, whatever it would cost for that specific cutter to re-cut.
I remember reading about someone recommending it so I was just wondering if it's common.
You must log in or register to reply here.
Be a part of the community Get 3 HCA Results
Jewelry Blog