Asscher...too good to be true?

I'm a new poster, but I've been lurking and reading your incredibly informative posts for a week now. So here's my situation...any guidance from you experts out there will be greatly appreciated.

I have reserved a diamond with the following specs from an online vendor:

Compared with other Asscher cuts on the same vendor's site, I find that this price seems almost too good to be true...UNLESS there are some more esoteric factors I'm too ignorant to grasp. The vendor does not list an overall cut rating, at least for this style of diamond, so I'm forced to go on the GIA info listed here. What more can I ask of the salesperson when I finally make the call? Should I check its crown angle? If this is not a "real" Asscher, but simply a "square emerald," does that make a difference in terms of value? How can I differentiate between the two? Most of all...does this seem like a good deal to you guys out there in diamond land?

ps While I'm on a roll, one last general question: If I know how to read my table and depth percentages correctly, shouldn't I be able to tell whether a diamond's cut is GOOD, VERY GOOD, EXCELLENT, or IDEAL? What other factors go into this overall rating, or is this a rating given to each diamond on a case-by-case basis by GIA?

"ps While I'm on a roll, one last general question: If I know how to read my table and depth percentages correctly, shouldn't I be able to tell whether a diamond's cut is GOOD, VERY GOOD, EXCELLENT, or IDEAL? What other factors go into this overall rating, or is this a rating given to each diamond on a case-by-case basis by GIA?"

While I am no expert by any meaning, especially on Ascher's I hope this helps.

The information provided on the GIA report such as table and depth percentages are a good start, but you need more information to be able to determine the quality of the cut.

Is this an internet vendor, or are you able to view the stone in person? If you can view it in person you will be able to determine (to a degree) the quality of the cut. There are many factors that play a roll in the cut quality including, crown and pavillion angles and depth percetages. You want to make sure that the total depth you are given does not correlate to a very thin crown and a very deep pavillion.

You can ask the vendor for a lot of different information that may help you determine if this stone has potential.
Sarin or Ogi reports, Brilliant-scope reports, pictures, Ideal-scope pictures, Diam-Calc and Gem advisor files. Most vendors will provide some of this information if you ask. Some vendors already provide it. For example GoodOldGold.com

Of course, this information will only give you better insite as to whether the stone has potential to be a winner. You will not really know until you see it for yourself. You may also want to consider getting an independant appraisal.

Also try and run through the information on this site under the tutorial, and run a search on Aschers on Rockytalk. That should give you more to work with.

Sounds like a great diamond. I am not posting to give info but ask some questions. I also am in the market for an Asscher cut between 1.5-2.0 ct. and it sounds like you have done your homework. I am having trouble getting comfortable with the square emarald cut as opposed to a true Asscher for long term value. Also, the cut diminsions seem to do not seem to have any agreed upon standards. Have you come across any specific info on the Asscher/square emarald that you are willing to share. I am not looking to purchase until after the first of the year.

I am not sure what you mean by "long term value", but I would not suggest you worry about if the diamond can be sold later fo profit. There have been quite a few threads on here discussing the potential downfalls of investing in diamonds.

As far as a guidline for Asschers, I am sure. I would tend to think that the AGA class charts for Princes cuts would be somewhat accurate. "http://www.gemappraisers.com/chrt4.htm"

You can probably email Dave Atlas and ask his oppinion.

Here is a picture I found on another forum that shows some of the different square cuts side by side.

Ok, I will have to get the picture later, the server is too busy at that other site. Another reason I don't like that site.

Yeah for Leonid and Pricescope!

It is rather neat to see the stones side by side though.
Hope this helps!

Ok the picture is too big and I am not good with sizing them to work. I will send it to Leo, to see if he can post it.
Hope this helps! 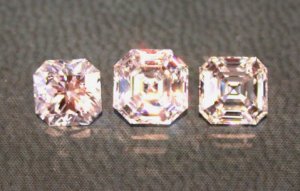 Thanks Leo
Hope this helps!

Hey bcnewguy (from one newbie to another):

I HAVE in fact done my homework on Asscher cut diamonds (which, I might add, you might get some resistance on from friends who are into more sparkly cuts). I, however, am very attracted to them as classic, understated, old-school stones, as opposed to flashier square cuts like the princess. To me they look substantial yet light and classy. If you ever see an Asscher rock in a Lucida solitaire platinum setting, you will know true beauty!

Anyway, my research has led me to the following conclusions, which our esteemed resident experts are invited to correct. The target table and depth you want to go for are both in the 60 percentiles. Low 60's is optimal. Your crown angle should be from 32 to 36 degrees. Girdle: Anywhere from thin to thick, but neither extemely thin nor very thick. Polish and symmetry very good to excellent, though good is acceptable. Few vendors that I have seen publish an overall cut rating for this style, which is why I found it curious to see a stone with ostensibly great numbers priced below another stone that looked less impressive on paper.

As for the difference between Asscher and Square Emerald cuts, I have to say there seems to be much debate on this topic. I have contacted several sellers of Asscher cuts who have told me that the two things are essentially the same. I have seen enough of these stones now not to worry if someone's referring to them in either way. But don't get confused with the Royal Asscher, which is a Danish branded square cut that carries an extra cost premium.

And if you're a fan of square cuts in gereral but want a bit more flash, try either a Flanders (old-fashioned cut) or a Lucere (almost the same as the Lucida cut at Tiffany's).

I hope I haven't gotten too much of my information wrong and that you find this helpful!