Any educated guesses on if this might be eye clean?

Looking for a .93-1 carat, H, VG, SI2 or better, my budget for the stone alone is 4500 CA
I found qthis through a pricescope search- cannot speak with anyone until Monday-from these pictures is there an opinion whether this is eye clean? 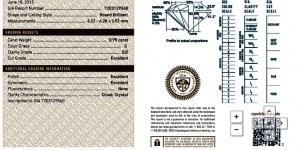 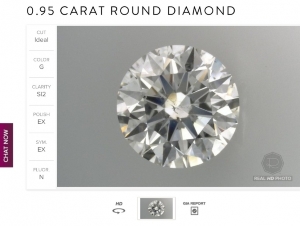 The heck with eye-clean.
I'd pass that diamond up because it's poorly cut.

It will not have good light performance, even though GIA graded the Cut as Excellent.
Unfortunately, GIA's top cut grade allows lots of dogs and this is one.

If your vendor won't give you an IS pic find another vendor and tell her/him why.
Also, you can buy your own IS scope that the link above.

Here's the failing HCA for the diamond you posted ... that 'so-called' GIA Excellent. 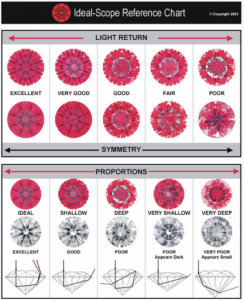 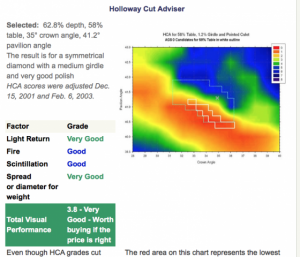 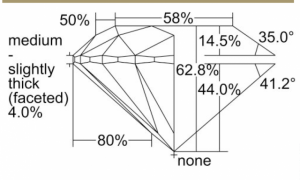 Thanks so much Kenny for the information- this is all new to me- I was using the excellent cut in the GIA as a guide for whether it was well cut- I will use the HCA to determine the cut quality- I am starting to realize there is alot more to making a smart diamond purchase than I realized- I guess I need to be prepared to do some more homework thanks again!! I appreciate your help

You're most certainly welcome.

Remember, the HCA is a rejection tool, not an acceptance tool.
Reject diamonds scoring over 2.0, but don't just buy one because it scores under 2.0 ... get an IS pic on under 2.0s.

The crown and pavilion angles from even the more reputable lab reports are the AVERAGE of 8 angles each around the diamond.
Rounds are not actually round ... they have 8 flat sides.
There are actually 8 pavilion angles and 8 crown angles.

If all angles were identical we could believe the average but if some angles were high but others were low the average would not reveal that ... but an IS pic would reveal such wonkyness.

... and yes it's tragic that GIA dropped the ball on cut grading ... I think they got to friendly with the diamond sellers who pay them money while forgetting us, the consumers who pay the sellers money.
__________________________________
"We are all atheists about most of the gods that societies have ever believed in.
Some of us just go one god further." - Richard Dawkins
You must log in or register to reply here.
Be a part of the community Get 3 HCA Results
Jewelry Blog