Advice on creating a custom made ring / diamond setting

I'm currently overseas in the middle east and have bought a few diamonds (3 white approx .050 carat) and one x deep blue (0.64 carat). I'm looking into create a setting for these 4 diamonds (the 3x white around the blue) in a custom made ring for my partner. It's not an engagement ring but basically a birthday present. I've shown the idea to a few people and they say the general setting and contrast of the deep blue with the white cut around it works quite well. My partner has lots of jewellery (as women usually do) and enjoys large sparkling standout stuff. While she has plenty of the bling, most of it is fairly cheap -- so I thought I'd give her something thats a standout but also worth a little bit more. Questions I have:

b) She has a thing for "snakes" and snake jewellery. Would it silly of me to ask the ring maker to create something in the line that looks like a coiled snake. Nothing too complicated. I would then ask him to set the 4 stones (3 white and 1x blue) at the top for best effect. There are several designs out there that I do like que search for "snake rings" on ebay shows a variety.

c) Is the setting of 3 around the blue diamond too little / too much & complicated? Should I get a 4th white diamond or is that going to be excessive a some people have said?

Am I asking too much? Is this going to be expensive? Should I have the diamonds valued / certified BEFORE the ring is made and set, or afterwards?

Obviously I'm new to this and seeing whether these ideas would translate well into this ring..and I am well aware that diamonds are generally used as engagement rings, however we are nowhere near that point in time yet

Any help and guidance would be appreciated..

I'm sure a lot of PSers will help you to get a beautiful birthday present for you partner.
She seems the "one of a kind" type, so I 'd suggest to buy her a modern and unique ring.
I 'd prefer white gold and I think the diamonds you already have (3 white and 1 blue) are enough to create a nice ring.
Some pictures for you...get inspired!!! 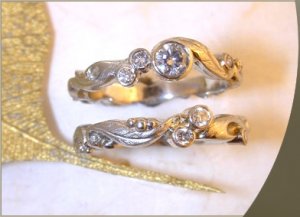 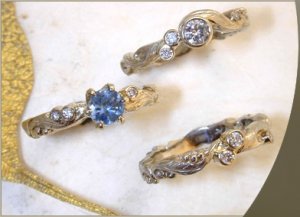 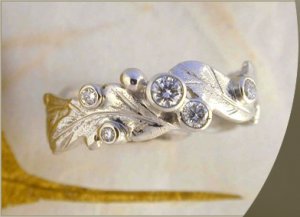 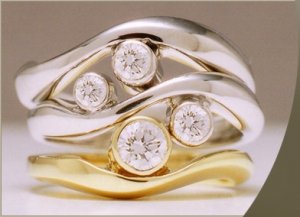 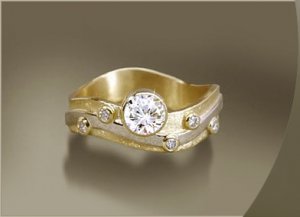 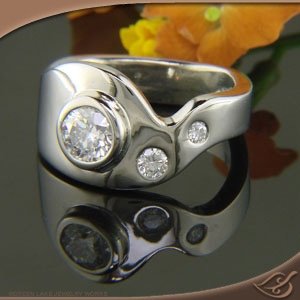 Thanks very much for your replies, i particularly like pics 4 & 5, and will have a look at the sites given to me. Something a little bit more "snakey" with 4 & 5 and I'll be a happy chap

I don't know what your budget is but I think Caleb Meyer would do a great job on this design. So would Mark Morrell if he was interested.

I'd give them a call.
"So often in life, things that you regard as an impediment turn out to be great, good fortune." -- Ruth Bader Ginsberg

I think your idea of a coiled snake is DIVINE!! I would love that for myself too! You have very nice and exotic taste and it seems like your partner has too!
M

Thanks for the replies...

My budget.. well given that I got these diamonds at quite a discount..won't reveal that here..but I did pretty well on them.. I'd say the ring itself 2-4K $US? Bearing in mind that this is not an engagement ring..I think it'll turn out to be quite a "decently" expensive bit of birthday blind.. Surely a jewellery designer can do me a reasonablly designed "coiled snake" ring for 2-4K with the addition of those 4 diamonds..

I like ring number 4 also. Maybe you could do something like that and have one of the bands textured with a snake look.
You might consider some of the vendors on etsy.

Thanks guys.. lots of ideas, I've printed off a few pics.. unfortuantely I'll be going back to Australia, so I will have to find a decent ring designer there.

I know there are many others...but I can't think of them. hopefully someone from down under will chime in
slg47
You must log in or register to reply here.
Be a part of the community Get 3 HCA Results
Jewelry Blog