Abrasion of a diamond 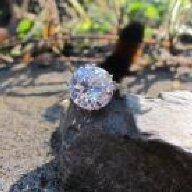 I purchased J SI1 2.24 diamond from Whitefalsh 2 year ago.

I decided to upgrade it and sent it back to them. I got a reply that it has an abrasion on pavilion and needs to be sent to the lab to check if it qualifies for a full refund.

I wore it for a few month in a simple Tiffany style setting with plain thin white gold wedding band and than reset it into a pendant and wore it on my neck for the rest of the time.

I just want to ask what can possibly cause abrasion of a diamond and how common are they?

Here is a link to the diamond:

Thank you in advance for your replies.

A lot of things could cause it: diamonds are the hardest material on earth, but they have excellent cleavage ... and in an SI1, that can be exacerbated by any inclusions or flaws within the stone. So it could have been a matter of dinging it at just the right angle while you were wearing it: you might not even have noticed it happening. Lots of people don't, and come on asking how their stone broke in half - so, a) good advertisement for insurance, and, b) lucky it's just an abrasion!

That said, if it's an abrasion, I'm guessing the most it might need is a repolish, and I don't think that should take a lot off of the value.
www.otherwise-engaged.com

Part Deco, All Fabulous
You must log in or register to reply here.
Be a part of the community Get 3 HCA Results
Jewelry Blog