Ok...so I fell in love with with these being offered on the internet. I guess there is no way to verify the 4c''s from a picture...right? I am thinking about purchasing only after Atlas company checks them out. Is it crazing to consider buying them...he is not a jeweler. 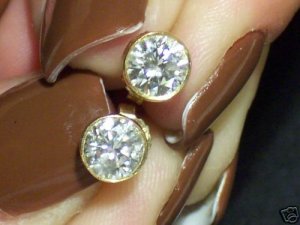 Firstly who is selling them on the net? Are they on Ebay? The vendor is not a jeweller? Who is the Atlas Co?

Price? There is really no way to know anything about these studs, even if they are real diamonds, colour, clarity, cut quality which looks not the greatest to me even if these are the actual ones offered, lab grading report....I would need a whole lot of info before making a purchase, without solid info and guarantees it is very risky. Come back with more info if you can, particularly who is selling them and we can go from there. If you want some diamond studs, you could give us an idea of what you want and budget and we could offer some suggestions. Buying online with some knowledge and a good vendor is a great way to go if you know what you are doing and whom to trust. It might be an illusion or the setting, but the diamonds look out of round to me...
Pricescope Prosumer

So the seller is giving you no information about the studs at all? What price are they offered at?
M

He said the stones are H-I VS2. Do they look it?
Answers appreciated!

Very hard to say...there is no way we can really tell from a pic like that what the colour might be, plus they can show differently on different monitors, also the VS clarity...could be, but many SI2's and even I1 etc can be eyeclean or fairly eyeclean, no way again to tell in a pic. Also many of us like myself aren't in the trade, but are enthusiastic diamond fanatics and as such aren't qualified, the experts would have a hard time judging the colour too from a pic.How does he say the diamonds are of that colour and clarity, does he have a grading report such as GIA? Stating they are H - I colour makes me concerned at once that they don't have a grading report, and this is either his estimate or that of someone else, whose skills might be doubtful to say the least. They might come with some sort of grading " card" which says the diamonds are so and so in colour and clarity, but ideally you want diamonds which are accompanied by a well respected report from GIA or similar.
Pricescope Prosumer

Look up the retail price for TWO grades lower in color and clarity and for only 80% of the reported weight and for horrible cut.

Now cut that price in half because they are not being sold retail with a pic like that.

Cut it in half again to compensate for the risk.

I think adding an appraisal fee to the price of the item may or may not be worth it, personally. You can get diamond earrings bezel set in yg almost anywhere and be able to choose your diamond quality.