New mum Emma Roberts recently celebrated her 30th birthday on the 10th of February. It is a tradition at PriceScope to celebrate both local and international celebrities on their birthdays. Moreso, it is a time when we get to compile a style file of their jewelry looks throughout their years of stardom. Emma Roberts is an Aquarius that stood out to us. She is new to motherhood, entering her 30s, and let’s not forget that she is the niece of an American actress, Julia Roberts. We love Emma Roberts for her personal sense of style and on-screen talent. Let’s take a closer look at who Emma Roberts is and how you can pull off her jewelry looks for less.

WHO IS EMMA ROBERTS?

Emma Rose Roberts was born on the 10th February 1991. She is world-renowned for being an American actress and singer-songwriter. Emma Roberts received recognition for her lead role as Addie Singer in the Nickelodeon television comedy series Unfabulous (2004–2007) after making her film debut in the crime film Blow (2001). In 2005, Emma Roberts released Unfabulous and More, her debut studio album. Emma Roberts has appeared in many films, including Aquamarine (2006), Nancy Drew (2007), Wild Child (2008), Hotel for Dogs (2009), Valentine’s Day (2010), It’s Kind of a Funny Story (2010), and The Art of Getting By (2011).

Emma Roberts has been in a relationship with actor Garrett Hedlund since March 2019. In August 2020, she revealed that the couple was expecting their first child, a son. Emma Roberts became the first pregnant celebrity to appear on the cover of Cosmopolitan magazine in December 2020.

Early this month, FRED jewelry from Paris paid tribute to the 1990 American film, Pretty Woman with a relaunched collection of jewelry. FRED chose Emma Roberts, niece of Pretty Woman star Julia Roberts, to join in this celebration of love and jewelry.

This necklace boasts 659 diamonds and 11 rubellites and took over 340 hours to create.

The original necklace from the film has also been reborn in a flow of hearts paved with 992 diamonds and 17 rubellite hearts set inside. The Pretty Woman collection also includes an array of cuff bracelets, broaches, rings, and earrings.

Emma Roberts is one of many star-studded actresses that has become a brand ambassador for high-end jewelry in recent times. Are you an Aquarius baby or an Emma Roberts fan? Do you have jewelry that’s similar to her style file? Click the comments button below and add your jewelry to the thread. 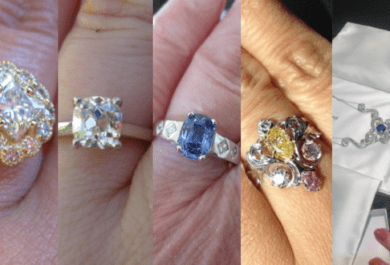