The Jewels of Diana, Princess of Wales as seen on The Crown

The newest season of The Crown has been released, and if you are like us you have already watched all of it and are left wanting more! This season features one of our favorites, Diana, Princess of Wales. Let’s compare the jewelry actress Emma Corrin wore in the series to Princess Diana’s real-life jewels.

The masterful costuming transported us directly into the lives of the British aristocracy of the late 1980s. This season seemed more surreal than the previous ones, perhaps because they’re more recent. It was transfixing to see these images as if they were lifted from the pages of magazines and newspapers all across the world just a few decades past.

Lady Diana Spencer had few pieces of jewelry to call her own pre-engagement, but one piece was a gold chain-link bracelet. HRH Prince Charles gifted her charms to add to it during their marriage, beginning with a W to mark the birth of their first child, HRH Prince William.

Among the initials of her sons, there are things like ballet slippers because Diana had dreams of becoming a ballerina in her youth. It is a display of affection and romanticism that can seem lost in many of the tales about their marriage.

The Spencer Tiara has been built and maintained by the Spencer family for over a century now. Originally the central parts of the tiara were a wedding present to Lady Cynthia Hamilton at her wedding to Albert, Viscount Althorp in 1919. That central piece, along with other pieces from the collection of Lady Sarah Spencer (the unwed daughter of the 4th Earl) were finally supplemented and constructed by The House of Garrard in the 1930s creating the tiara that we know today. This was Diana’s favorite tiara in part because it was lighter weight than others and easier to wear. It is a stunningly beautiful piece, and it was magical to see it recreated to be part of this season’s wedding costume. The Spencer Tiara includes 800 old-cut diamonds with an estimated total carat weight of 48 carats.

The “Something Blue” Engagement Ring

Hers is one of the most recognizable engagement rings of all time. Diana chose her own engagement ring and it was not custom made – it was from an over-the-counter collection that could be purchased by anyone who walked in (if they had the money). The 12-carat oval Ceylon sapphire is surrounded by 14 solitaire diamonds and set in 18-karat white gold. The House of Garrard created this beauty in blue, inspired by a sapphire and diamond cluster brooch given to Queen Victoria by Prince Albert in 1840 as a wedding gift.

Diana was very fond of pearls (rumored to be her favorite). Diana’s pearl choker was three-strand in life, though it seems they went with two for the show. This three-strand pearl choker with a flower-shaped clasp was a gift for her 18th birthday from her family. It was one of Diana’s favorite pieces of jewelry and it can be spotted in many pictures of her. Diana was a big fan of pearls and had many decadent sets in her collection. 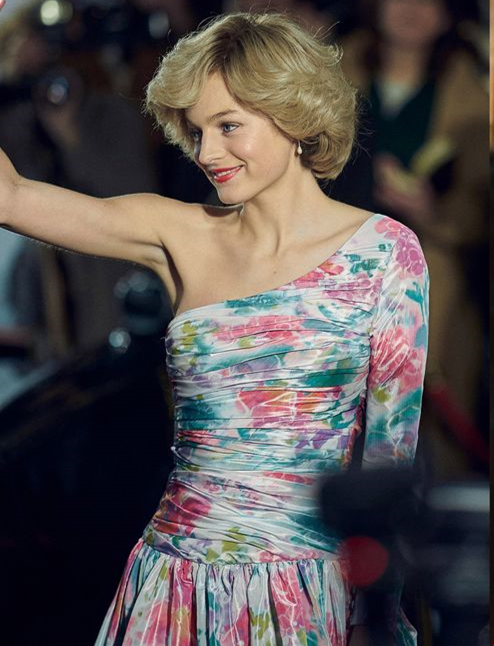 Diana’s floral pearl drop earrings were a wedding gift from the Emir of Qatar. The white diamonds create a flower with a gorgeous pearl drop beneath it. Diana continued to wear this beautiful pair of earrings throughout her life.

The Prince of Wales Feathers Pendant

The featured image on this post includes the Prince of Wales Feathers Pendant that was originally a gift to Princess Alexandra of Denmark upon her wedding to the Prince of Wales (later King Edward VII) in 1863. It has a detachable cabochon emerald that can hang from the circle. The brooch was inherited by the Queen Mother in 1935, who gifted it to Diana upon her engagement to Prince Charles. It returned to the Royal Family upon Diana’s death and has been seen worn as a brooch by Camilla, Duchess of Cornwall.

Diana’s jewelry collection was astounding and in a future post, we will discuss the legacy of Diana’s jewels – where we may see them again and how they may have evolved since her passing. In any case, Season 4 of The Crown is on Netflix now, and if you love the Royal family and are ok with some creative license you should check it out! If nothing else, enjoy the unbelievably detailed costuming choices.

What was your favorite piece from Diana’s jewelry box? Let us know in the Comments section below.