A G color diamond sits at the top of the near colorless range, at the border of colorless. It does not command the premium of colorless diamonds, yet remains extremely white.

A G color diamond is high on this scale, in a range described as “near colorless” by gemologists which includes G, H, I and J colors. There are only 3 higher color grades, while there are 19 grades lower than a G color diamond.

Considering its position in the scale, a grader giving a diamond G color is really describing an absence of color: Most of the world’s diamonds have some traces of yellow or brown, caused by chemicals in the earth where they formed. Diamonds with stronger levels of yellow and brown, as well as colors other than yellow or brown are categorized as fancy colored diamonds and graded using a different scale.

G color diamonds are some of the most popular choices, primarily because they remain white without commanding the premium of the colorless range. The most purchased diamond colors are graded F-G-H or I, set in white gold or platinum. A difference of 2-3 color grades is hard to detect unless the diamonds are held next to each other and directly compared.

Will a G color diamond show any tint?

As it relates to G color:

A G color diamond will not sparkle better than a diamond with lower color. A diamond’s observable brightness, fire, sparkle, and contrast are all attributable to its cut-quality. A diamond’s optical properties are not influenced by its color grade, except for variance in spectral absorption minutia which is rarely relevant.

If you are seeing a color G diamond which is inexplicably low priced it could have to do with a subtle or not-so-subtle brown, grey or green undertone which influences overall diamond color appearance. Such tint may not be disclosed on the laboratory grading report but are usually disclosed among wholesalers. Read our section on diamond color analysis for information on avoiding this issue.

Analysis-1 | Where does a G color diamond rank?

The internationally accepted grading scale and terminology for diamond color in the normal range consists of 23 grading levels. Grading is performed with the diamond upside down. Color G diamonds stand at the highest end of the near colorless range, just below the colorless border. 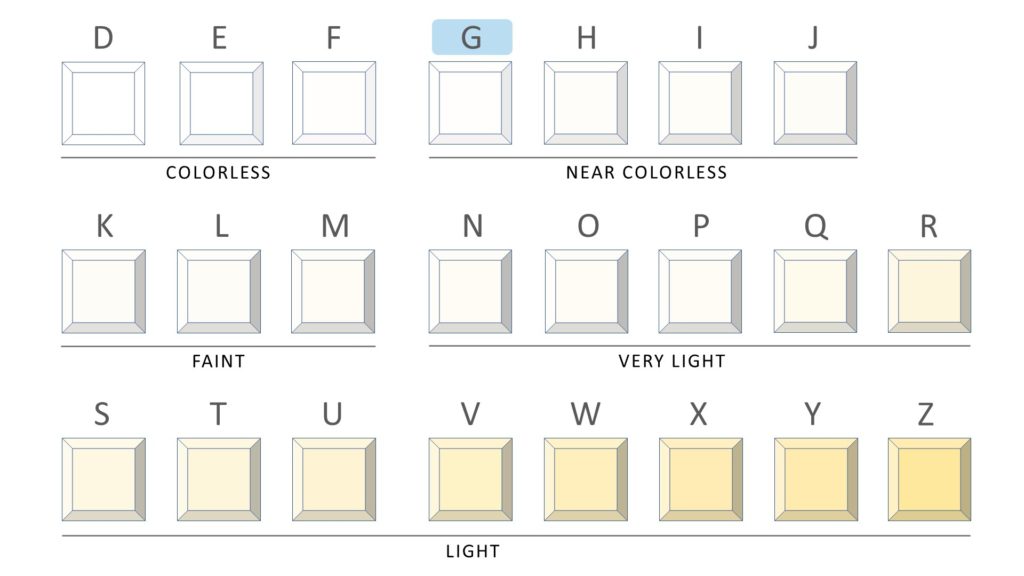 While the descriptive scale above is universally applied, standards can vary between individuals and organizations that decide a diamond has G color.