Your opinion on this rock PLEASE !!!!!

It''s got a couple of small crystals on the table and a cloud on top near the edge. I haven''t personally seen the diamond, but it is definitely a very clean H&A.

I''ve punched the numbers into HCA, and got a grade of 0.7 with all "excellents".

The only thing I''m a little concerned about is the color. Will this be a problem? Will an "H" be noticeable to the naked eye? Will this take away from the excellent cut of the diamond? I will be placing the stone on a platinum classic tiffany 4 prong solitaire (size 4).

Any recommendations or criticism will be greatly appreciated.

An "H" color is a fine color. "Near colorless" in GIA lingo, for a long time it was labeled as "white" by the old timers. In the days of "investment grade diamonds" it was the start of investment grade color. A good cut will only enhance it, and it will look great in platinum prongs.

Sounds like a seriously nice stone you've got there, at a good price.
Rich, non-Independent GG Appraiser
Sarasota Gemological Laboratory

Sounds lovely! the HCA score is phenomonal, it's also a great price for that size and quality. The H should not be a problem, especially if the cut is good which appears to be the case. There will be so much light reflecting from this stone, you probably won't see anything but blinding light!

Many people go I in color as well, but I think H is a safe bet esp if the stone is purchased sight unseen. My stone is a G and its icy white.

Did you see the H&A scope images? Would suggest to ask to see this to be sure it's a true H&A--if they have them available.

Otherwise sounds great. Would suggest making an appt with an appraiser to have the stone run through after you receive it...just to be sure that all is as it says on the Sarin/GIA etc. If the appraiser has a Brilliancescope or other cool tools, thats always fun too! There's a listing of some appraisers up above.

Congrats on finding what appears to be a very sound and beautiful stone.

Thanks so much for your opinions !!!!

Now I feel a little more comfortable with the choice.

BTW, here's the picture of the arrows.
I'm not sure how I can attach 2 pictures, so I'll post another for the hearts. 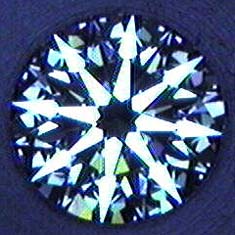 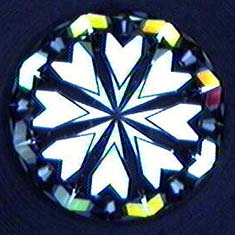 I'm not an H&A expert but wow those pictures are amazing! I love the sparkle along the edges (nothing to do with the hearts or arrows..hee hee). This stone sounds like a real winner!!

Now that's a beautiful stone!!!!!!!!! Very, very nice proportions and h&a!!!!! Sounds like a stunning stone! Congrats if you decide on it!

Thank you everyone for your input.

I am currently considering another stone from the same vendor.

I have provided all relevant info below. There is a significant price difference between the two due to the color, but it seems like the first stone's cut is actually better. Does anyone think that the Stone#2'is a bit too deep? Plus, it has a faint fluorescence. I've highlighted all the major differences. Any feedback will be greatly appreciated. Is Stone#2 worth the $1,000+ difference? 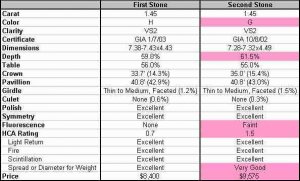 Will it be possible for you to compare the two stones side-by-side? That way, you can use your own eye to judge whether the G is *that* much better than the H color you originally liked. As both are in the "near colorless" category, I do not think the difference will be that significant.

However, another note: the faint fluoresensce is "supposed" to make the stone lighter in color. I don't remember the exact reasoning, but I believe that the blue color of most fluorescing stones offsets the yellow.

Also, in looking at your research comparison, it appears that your first, H colored stone seems to have a better HCA score and has 4 EX's than the second G-colored stone. (This seems to be due to the fact that the G stone has more depth and a smaller table, thereby affecting the spread). To sum it up from my analysis, it appears your choice is between better color vs. better cut (although the differences between the two stones are by no means huge). With that simple scenario, I would pick the stone with the better cut everytime. (Guess it was the education I got on this board when I purchased my stone!)

I seriously doubt that if you put these two next to each other you would be able to tell the difference. You definately would not know the difference once it is set and not sitting next to another. I would go with the cheeper one just because there doesn't appear to be a noticable value added to the second. It may be worth more, but the visual difference to you doesn't warrent the price, does no added value to you.

That is unless, the G is a great G almost F and the H is a bad h almost I. Or, one or the other has some unknown cut flaw that causes it to not perform as well.

You really would only know to see them I guess.
Hope this helps!

Thanks so much JayTee.

That's exactly what I was thinking (cut over color), but then again, the #2's cut is still very very good, and wouldn't you rather give your girl a G then an H (if you had a choice)?

The vendor will take pictures of the two side by side and send them to me, so I'll see how they stack up.
R

The H is actually closer to a G, according to the vendor, but I don't know about the G yet. He did say, however, that you can see a color difference if you place them side by side, although not from the top. 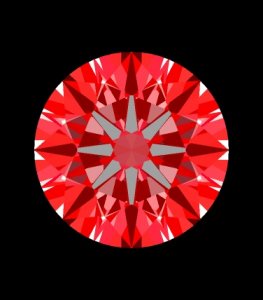 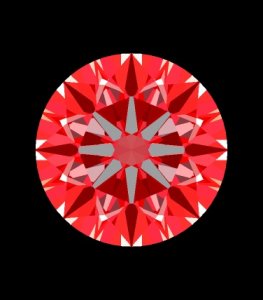 I think I'd go with the H/VS2. It has a 10th of a millimeter bigger spread (which the eye will pick up), is slightly brighter (notice the slightly paler pinks on the G/VS2 image), and is $1200 cheaper.

You'd be getting a "bigger" stone with a "brighter" performance with almost as good a color for substantially less.

Disclaimer- The facet arrangement and symmetry of the image will probably vary from your actual diamond, which may affect the light performance indicated. The computer generates an image with “perfect” symmetry, which is rare. Also, the star facet/lower girdle lengths may be different from your diamond. The computer simulation is reproduced best when the actual diamond is being viewed and the image "tweaked" to the appearance of the diamond, or Sarin info is downloaded directly into the program. However, this "blind" reproduction should be helpful in considering the major light performance aspects..
-----------
Rich, non-Independent GG Appraiser
Sarasota Gemological Laboratory

I heartily agree on the H VS2 stone...is a color grade worth $1000 when all else is similar? No definitely not, in my opinion.

The two stones are very similar--even down to Rich's DiamCalc mockups...but the deciding factors in my mind are these three. 1) the $1000 difference for one color grade bump is a ridiculous amount...not worth it. G is great...my stone is a G and its icy white...no hint of color to me at all. Many people have gotten H's on here set into platinum and been REALLY happy with the results...keep in mind also that if these stones are well cut, the sparkle will mask color better than a dull stone...so you are probably getting something like a high G sparkle with a well cut H stone 2) the 2nd stone is slightly deeper than the 1st stone so as Rich notes, the spread will be slightly larger. So you have two very similar stones...but one has a slightly larger diameter making it look larger than the other one, and the other is larger in the bottom where it is carrying the slight extra depth, so what makes more of a visual difference? Hands down the bigger top wins in my mind, esp when it the depth is still in good proportion to the rest of the stone 3) the better HCA score...it's like icing on the cake.

Save your $1000, get the H and if you want to spend that money....spend it on a setting with side stones or pave or something sparkly....or put it into your honeymoon account and upgrade the trip!

You mention something about wouldn't anyone want to give their girl a G colored stone...my comments as a girl on that is that I'd be more happy knowing that my guy saved a bit of $$ and still got an amazing stone that sparkled like the dickens and was well-researched...but then again I am all about getting the absolute most for my money regardless of the purchase.

Good luck...both stones sound and probably look amazing...so the decision has to come from your heart!

Actually Rich, judging by the H&A pattern the stone appears to be of the shorter star/lower girdle combo.

I'd modify your graphic accordingly check out this hearts image compared to the pic he just posted. 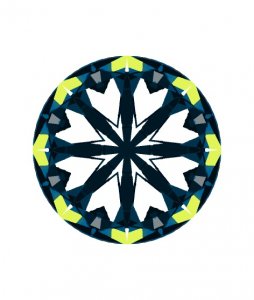 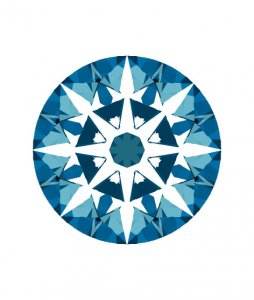 My experience with these types of H&A's (those of the shorter star/lower girdle combos) is that they place empahsis on fire more than they do scintillation. As you will see in the gem file stones with the broader arrows have chunky bold flashes of colored light which is what appeals to those who like this look. Check out the stone in the disco light then hit the green play button on your gem reader software. It should be a visually beautiful stone and has a different flavor among the H&A's that many like. Attached here is a gem file.

Thanks so much, folks. You're always so helpful.

BTW, Rhino, these rocks are from your good friend, Todd.

Yep. I could tell from the pics.

Thanks. Todd... my regards to you as well friend.

Everyone, I bought the "H" !!!!!
All of your comments were very helpful in making my choice.

I should be receiving the diamond on Thursday and I can't wait.

Thank you Todd and Robin at Niceice.com for being such wonderful, patient vendors.