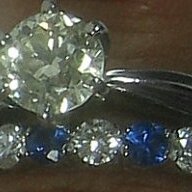 So I have been having a ball looking at stones, taking everyone''s input into the mix....changing my mind every time I see something lovely.

I have an eternity band with round stones. Is it most pleasing to the eye to have the stone in my engagement ring also be round? Do people mix the gemstone shapes of rings worn together?

People often mix shapes and cuts, but one needs to be careful when doing so. There are also some unwritten rules to help you out. Step cuts (like emerald cuts, asschers, baguettes...) have a more subdued brilliance than brilliant cuts (rounds, ovals, trillions, pears etc.) so when mixing these two cutting styles, it''s best if the brilliant cuts are in the center of attention. Since they''re much more "flashy" (brilliant cut was developed for diamonds, after all, and these others are mainly it''s variations), they tend to overpower regardless of where and how they''re set, so it''s best to place them where they fit best - where they''ll be seen the most. At the same time, if step cuts are mixed with brilliants, it''s best if they''re used as side/accent stones. Hope this explains "shape mixing" to a point. If, however, you''re worried that only rounds will look good with rounds - that''s not the case, especially if they''re not set in the same piece of jewellery. But if your eternity is set with brilliant cut diamonds I''d be careful with step cuts, cause those bands can be really "sparkly". Maybe mixing a darker stone with them wouldn''t be a bad idea, cause a stronger contrast would make your e-ring stone quite eye-catching.
mr. ma re

Rounds are very versatile. Since your eternity ring stones are also fairly small, your e-ring can be of any shape and cutting style. However, if you are talking about mixing the two styles/shapes together in ONE ring, then caution comes into play. You don''t want too much of a contrast.

BAD
step cuts with brilliant sides = the brilliant sides will overshadow the center step cut
rounds and squares in one ring = avoid odd shapes that are unpleasing to the eye
light coloured center stone with dark sides (but diamond center is fine) = strong side stones will overshadow a light center stone
Sometimes the mind ignores what is logical because the person cannot accept the reality of what it is.

Ma Ra and Chrono.....will you marry me???????? Thanks for the helpful advice. I am sure there will be another question tomorrow.

Oh dear...I don't think it's possible and I think Ma Re's taken too.

Bring on the questions. I love to help in any way I can.
Sometimes the mind ignores what is logical because the person cannot accept the reality of what it is.

Bring on the questions. I love to help in any way I can.
Click to expand...

BTW, you should also be careful about the outlines. It can be tricky to mix stones with straight outlines (princess cut, emerald cut...), with those of "rounded" outlines (rounds, ovals...). Also, IMO if one shape is more elongated (like an oval, or an emerald cut), the other shape should be too. It''s not a must, but it often works better than mixking cuts of equal lenght to width ratio with the more elongated ones.
mr. ma re