Hi, this is my very first post at PS and I actually wish I''d read a lot lot more before having put my ER & band in for remodelling ... for the 2nd time! My original ER was a Tiffany Legacy style in Rose Gold with WG setting, but unfortunately the crossover wires wore through within 2 years against my princess diamond bar set wedder. So, I had it remade and the result was HORRIBLE!!!!! Now that I have read a lot more on this site though, I can see that all of you could have picked it apart for me and maybe I didn''t need to get it completely remodelled.

Anyway, here we are and I have it in with a jeweller in Melbourne (Australia - where I live) as I saw their version of the Lucida and just loved it, especially because it''s what my husband initially had made for me, so it keeps the sentimental value there and hopefully as I''m having it in white gold this time it will enhance the stone rather than emphasise that it''s a smaller centre stone. I''m just concerned that I originally wanted it to be just like the one in the store, except that had a larger centre stone which is a round brilliant whereas mine is a princess cut. So, when I saw the CAD pictures I had an issue with the supports that run across under the stone because in the store with a larger diamond they didn''t need to use those. Also, I enquired about having picture frame claws rather than standard round claws (I apologise our terminology might be different here to the US) and initially they said not to, but in the end when they decided to do it in CAD rather than using a cast, they said they could. Anyway, I''m only interested in opinions. I haven''t been in to see the wax version - I could have but felt as though I was being a pain, where I should trust the jeweller to make it fabulous for me. I only have a .70ct princess and my wedder will have 11 x .5 princesses so it''s not huge however I am quite a large ring size (an so he will have to be a bit of a magician to make it look generous on my hands!! Anyway, that''s the story. It''s away having the diamonds set and I expect to get it this week, but am really worried about that support across the side - I think it makes the small side stone look a little strange? It would look much better open, but the jeweller will not guarantee the centre stone security without it. I will attempt to attach the wax pics for you ... hmmm, not working. I will have to figure out how - sorry.
Loveloveloveit

I have tried to attach a very bad photo of the original remodel which shows all the diamonds in one ring - it looked okay from the top but ugly from the side and uncomfortable to wear because the diamonds weren''t integrated into the band. Not sure if it''s worked ... 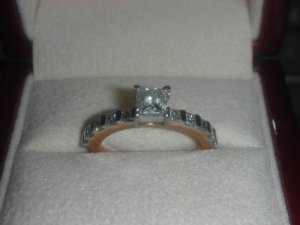 When I got this ring back I was so disappointed but I had just had my 2nd baby and although I voiced my concerns by the time I tried to follow it up my contact had gone on maternity leave. I feel like such a dill for not having insisted they give me a drawing and more information first about how it was going to look - I had only given them a picture with a top view to work from, plus my verbal directions, but it came back nothing like it. It should have been more like this ... 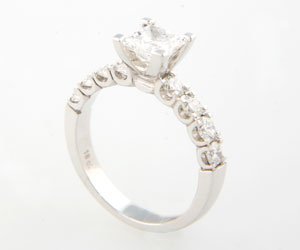 Looks like you wanted prong set sidestones and they gave you bar set.
We only know the most minuscule fraction about life, ourselves and the universe and even that changes daily. To only believe what science can prove right now is like living inside a small box and not being open to the possibilities that lay outside.

I actually didn''t mind the bar setting but I wanted it to look much more delicate. I didn''t like the basket at all - I''d asked for more like a V setting. Doesn''t matter now anyway, it will all be gone and hopefully the FINAL attempt will be a good one, hopefully based on having a good jeweller. This time I have met the jeweller and discussed it with him however I only met him twice before ordering - that''s why I''m so nervous. As much as I told him I want it to be similar to the ER & band in the store, that''s the only clear direction I have given him and as mine is a princess rather than round brilliant, it does change some aspects of the setting. I have to just wait and see. What can I do if I don''t like the supports under the stone though? Does anyone else have a similar size princess that is set open at the sides? Do you have any issue with security of the stone?

Did you see the cads of the new setting? Do you have anything you can post? You should have found some pictures
of some settings of princess shape stones that you liked (the basket area) and asked them if they could make it like
that. I''m hoping it comes out the way you like it. I just wish were able to show him some pics of how you wanted
your princess stone set. Please post pics when you get it back. We always like pics!

BTW - is it too late to give him direction on the basket?
~~~Thanks to PS, my wants far exceed my budget!~~~

Hi - I do have CAD''s for both of the rings but I can''t work out how to post them here - they might have some sort of restriction on them?? I have actually found a photo of my diamond in the original setting my hubby chose, which is rose gold. I will post it here. Also though, I finally bit the bullet and went to the jewellers today to see how the rings are looking so far and I must say the wedder is looking GREAT - I am really happy with it. The ER isn''t finished yet and is in it''s most basic form at the moment, but I can see that finished even it will look nice once it''s done. My diamond is the biggest issue, it''s not very large so it really needs to be accentuated so that it looks okay. I am hoping for an upgrade just to a larger one for our 10 year wedding anniversary which is still a couple of years away ... Here''s the original photo though (not a great shot - it was taken just after he proposed in the middle of winter so no sunshine sparkle I''m afraid). Unfortunately you can''t see the sides for the Lucida detailing. The setting wasn''t the best made I don''t believe as it always sat very low and band was too wide for the diamond.
Loveloveloveit

hope this isn''t too small - had trouble getting it under 100kb so had to downsize (not a technical whizz it seems, who knew?!!!) 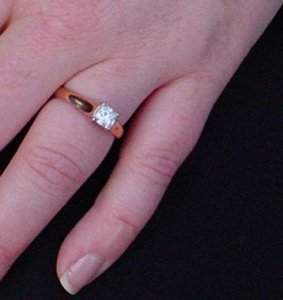 out of interest, this is just like my original band, except it was rose gold with a wg setting -