BOGOTA (AFP) – A massive uncut emerald on exhibit in Colombia's capital is being touted by its owners as the biggest in the world, officials said Saturday.

The 11,000-karat raw green gem weighs in at 2.27 kilos (almost five pounds) and is on show in Bogota 12 years after it was mined in Muzo, in the South American nation's emerald country in Boyaca province.

"It is priceless," Santiago Soto, spokesman for the Minergemas 2011 gem industry trade fair under way in Bogota, said of the stone owned by the firm Coexminas.

No more than 15 people at a time are allowed to view the stone, with five guards looking on.

Colombia produces 55 percent of the world's emeralds, exporting them for about $200 million a year. 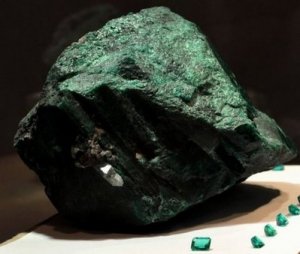 A pity that it is so included
When the people shall have nothing more to eat, they will eat the rich.

Do they ever cut stones from something like that or is it more valuable as it is?

I think this may be specimen grade, so likely more valuable as is. It would be a shame to cut it, considering the size. Were this gem grade it would be crazy

With emerald material is it possible that parts of the inside are gem grade?
I wonder if they can Xray it or something.
Think well.

I think just looking at it, it is worth more uncut just due to its quality and sheer size. As the largest in the world - it has a unique global status. Unless it is like the 7th largest or something, then perhaps they would cut it if they believed there would be a large gem quality deposit inside it.
Newbie Fancy Colour Diamond Lover

Now here's a big emerald. 858 carats 5 cm across. foolishly sentenced to eternity in the smithsonian mausoleum by harry winston. 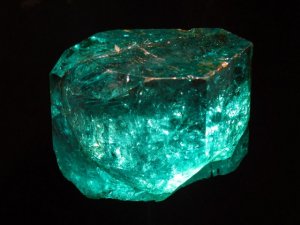 When the people shall have nothing more to eat, they will eat the rich.

@Kenny, I don't know anything about xraying rock I would guess they could? (but where the heck would they take it??) I'm just not sure what they would actually get out of it. Possibly its just darn expensive to consider?

The one from Harry Winston, that is facet grade right?

I know some don't get too turned on by non facet grade stuff, but I think its still kind of significant to bring something that big out of the ground intact. I'm sure something broke off of it somewhere but I can't imagine how big it COULD have been!

That's big! I wonder how big the cut stones around it are.

That thing is a piece of crap..it's pretty much just a rock. No crystal shape or habit and opaque as all get out. They can toot their own horn all they want but a piece of crap is still a piece of crap no matter how you look at it or how you try and justify it. At least that other giant one that was fought over in court in California had hexagonal habit and looked like an emerald( was actual crystal shaped and not a green blob)
These gems have life in them: their colors speak, say what words fail of. ~George Eliot 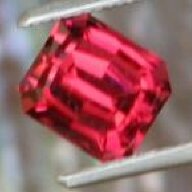 I am not sure if this is the same rock. Here is a video of a large emerald on display in Colombia.

It looks like it. thanks for this. I know it dosen't appeal to many but its pretty cool looking to me. (oh well, I'm not known for my taste )

I just was going to say, at least this one does not require an open setting... can be bezeled.