What is the idea behind "knife edge: styling??

I have just taken advantage of Valentine's sale prices at JA to get some stacking rings. I have never "stacked" before. One of my goals was to get a thin band in a size that will keep my diamond ring, which is temporarily set in an antique setting that is slightly too big, in place better. Since I'll be getting a new setting (when I figure out what and where) in the next year I thought, rather than resize the diamond ring why not get some stackers both to keep the too-big ring from spinning, and more importantaly prevent it from flying off, which I have been worried about.

Anyway, what I got from JA is as follows: (my idea is to keep two and likely send one back)

The cable band is delightful and likely a keeper, even though it does not look right with my diamond ring. I'll wear it with other rings. The 3mm is basic and substantial, which I thought would be a good thing for my bigger fingers (size 7.5) although maybe 2 or 2.5 mm would have been better, but I would have had to get the "traditional slightly curved" ring SKU 19128P. I wanted the "slightly domed" ring for a substantial feel and the thinnest it came was 3 mm. The knife edge ring is what I have a question about. Are knife edge rings supposed to be SO knife-like?? It's pretty sharp. Is the idea of knife edge that since only the pointy part comes into contact with surfaces that the whole thing will stay shinier? Or is it just an appearance thing? Who came up with this, Tifffany?

Long story short I like the way the knife edge looks with my ER better, but boy is it sharp. I might get used to it. All three rings have the desired effect of preventing spin and fly-off of the ER. Is it crazy to get the knife edge smoothed/flattened a little, or is that even possible? All expert advice welcome.

One other thing: I'll have to look closely under magnification to see where on the ER the point of contact is with each ring. There is a small diamond that might end up having the stacking ring right against it. 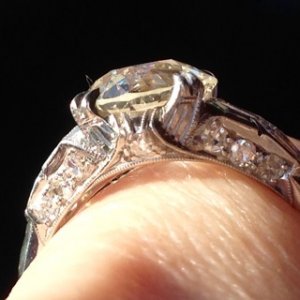 I have a 2mm Tiffany knife edge wedding band and it doesn't feel sharp at all, even though it looks like it might be. Have you gone to Tiffany to try theirs out? I think the knife edge is purely for aesthetics - isn't it the same design as the 6 prong Tiffany setting that is meant to make the diamond look like it's floating on the finger?

I recall Tiffany knife edge is a bit rounder, thicker, and feels more substantial than JA's basic knife edge. I could be wrong.
My fiance does not any comfort issue with her JA knife edge (finger size 3.5 if that matters). But many say it is not comfortable..

I'll look at Tiffany, although I'd need to find a knock-off still, can't pay those prices for something so basic. Thanks.
You must log in or register to reply here.
Be a part of the community Get 3 HCA Results
Jewelry Blog